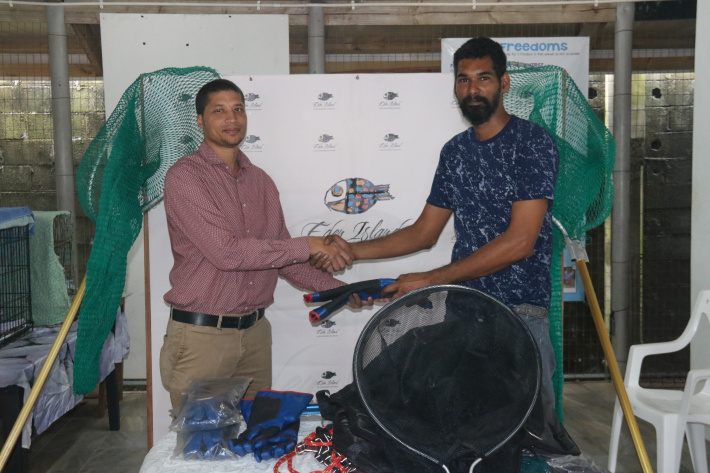 The Seychelles Society for the Prevention of Cruelty to Animals is now better equipped to handle and capture strays after they received a donation of brand new capture equipment by the Village Management Association of Eden Island.

The donation of equipment including leashes, protective gloves, nets of various sizes, harnesses and muzzles was officially presented to animal welfare officer of the Seychelles Society for the Prevention of Cruelty to Animals (SSPCA), Jimmy Marie, during a brief ceremony at SSPCA, Providence, yesterday morning.

General manager of the Village Management Association (VMA) Charles de Clarisse explained that VMA is concerned with the welfare of animals in the country and is committed to helping SSPCA, with whom they have a long-standing relationship.

“We have a lot of home owners who are animal lovers. Additionally, there is the new law, the Control and Protection of Dogs Act which will come into force in March and we think this donation will help improve the welfare of the dogs but also we do believe that this might lead to more strays which will result in more work for the SSPCA. We know this donation will be put into good use and will be beneficial to both the staff and the animals,” said Mr de Clarisse.

“We would like to thank SSPCA for their continuous efforts and for trying to educate the children in schools towards ensuring a more conscious generation of animal lovers in future. Some of the equipment will be especially useful to the staff and allow them to better catch the strays, restrain them and transport them more comfortably. We have been collaborating with SSPCA for a while now as whenever we catch strays at Eden Island, we give them to SSPCA for the necessary process and to get them adopted. As an association, we feel it is our moral obligation to support causes that are important to the country,” Mr de Clarisse noted.

The Control and Protection of Dogs Act seeks to better protect animals and to manage the stray population in the country.

“The donation comes at the right time. These equipment are pretty expensive and we are touched by the donation. As a non-governmental organisation, we don’t have access to funds so getting this equipment will help us tremendously to alleviate the pain and suffering of animals while we are transporting them. Some animals are pretty aggressive so now we can trap them properly without inflicting any pain, so we can transport them or administer medication. It is important that people understand that we all have a role to play and this donation will greatly help us in moving forward,” Mr Marie concluded.