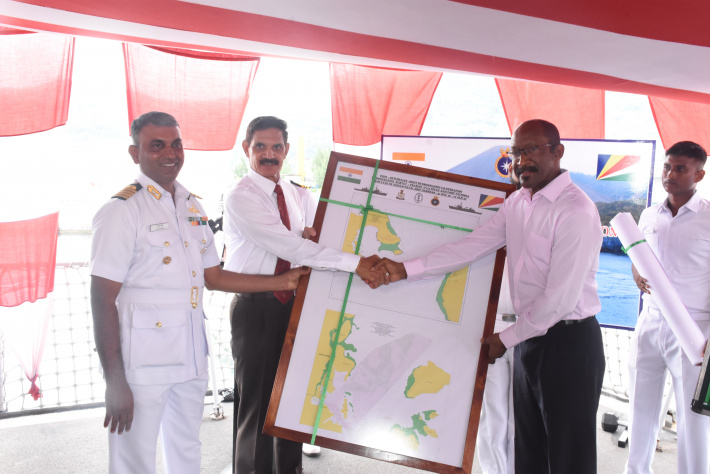 The handover of the hydrographic charts (Photo: Louis Toussaint)

It was the Seychelles government which approached its Indian counterpart to do these surveys.

The surveys have allowed for more recent updates to the country’s nautical charts which will serve to reinforce maritime safety and provide much-needed data for the implementation of projects such as dredging.

Minister Dogley explained that the new charts will, most especially, help in the construction being undertaken to extend the ports.

“Late last year, the experts working on the extension of the Mahé quay noted that they did not have enough data to determine how deep they needed to dredge. Hence we took this opportunity to also ask the Indian naval ship to survey the waters around Port Victoria. Now we have the necessary data which will be transformed into charts for mariners,” said Minister Dogley.

As for Praslin and La Digue, Minister Dogley said that it has become primordial to undertake surveys near these islands because their nautical charts were out of date.

“There were some areas in the seas surrounding Praslin and La Digue where mariners were unable to venture because there weren’t enough details on the depths and features. Now, we know exactly which points have rocks that protrude from the seafloor and when all the charts are completed, we will be able to provide the mariners with them for their safety,” concluded Minister Dogley.