‘In Sinus’ – a bold, bright and beaming solo exhibition by Birgitte Lubkemann

Walking into Eden Art Space Gallery last Friday night, one would have thought that someone forgot to turn on the lights for the In Sinus exhibition, a solo exhibition by German artist and La Digue resident Birgitt Lubkemann.

In fact, after walking through and catching a glimpse of the impressive bold, colourful artworks on display, it becomes evident why the lights have been deliberately switched off to allow the exhibit walls and artworks to stand out and proud in true colour.

The exhibition, described as an explosion of colour, comprises numerous oil paintings on canvas and represents two years of intensive activity that has seen the artist’s signature painting style evolve and develop in a number of new and exciting directions.

Inspired by waves, sand, rock formations, sound waves, and echoes, the collection represents Ms Lubkemann’s interpretation of the world around her on La Digue. Initially, the collection was to be named Rhythm of the Waves, but it was decided that the title was too long and simple. ‘In Sinus’ is a medical word describing an individual’s bio-rhythm when everything is functioning as it should and they are relaxed, and at peace.

“There are 77 pieces in total which I have been working on over the past two years. The exhibition comprises oil on canvas and I draw inspiration from La Digue, at my own house, my studio. I started by stretching my canvasses and I had the frames made on Praslin and from there decided to paint,” said Ms Lubkemann.

“The nature and environment in Seychelles is very rich and rich in colours that are vibrant and jump out at you. I like these bold colours and make use of them as I’m from a country where we seldom see such colours,” she explained.

Indeed, the collection makes use of bright and bold colours coupled with delicate brush techniques resulting in some beautiful and intriguing pieces. Of the collection, two particular pieces stand out, demanding the audience’s attention. The first is a statement piece, composed of numerous smaller canvasses which have been thoughtfully put together, to create one art piece.

“The biggest piece started with just a sketch because I was here about two years ago for the launch of the book Art in Seychelles and then I went to La Digue thrilled and with the idea in my head that I would be able to put on a show. As you see, the walls are so big and I didn’t want to do the normal, conventional things but I wanted to do something extraordinary. I thought about it and came up with the idea of not just one painting, but several paintings together on a wall, to form a pattern.”

“I was a bit worried about them not matching in the beginning, but I was also at the same time quite confident as all the pieces were produced at my own studio on La Digue and it is all about vibrations, waves, land, sounds and the vibrating on the rocks. I live in a wooden house on pillars that has been built on those rocks so if you are sitting on the wooden floor, you can feel it and I have always been fascinated by it so I try to switch off my mind and connect to those rocks and the atmosphere,” Ms Lubkemann noted.

The wall also led Ms Lubkemann to create another piece, the Puzzle, which is also on display at the gallery. A replica of the big wall, the puzzle gives gallery-goers an opportunity to uniquely collaborate with the artist and try variations of their own using the smaller pieces.

“Coming to the puzzle over here, I had finished about 80 percent of the wall and I had to go to Germany to visit some friends and family and I had not seen yet all of them together. I took photos of the canvasses, printed them out, cut them out and stuck them to wood and took them with me to Germany, where my friends and family, in restaurants, cafes and everywhere, were trying to figure out the right variation for the completed piece, the wall, and it was such a lot of fun so I thought I would like to share the experience, the interactive puzzle. Each of us has our own favourite wall so visitors can create their own walls,” Ms Lubkemann added.

Aside from the paintings, the collection is also accompanied by a short video depicting all the scenes that were instrumental to the collection including the gentle crashing of waves against rocks and boulders.

All the pieces in the collection are up for sale and will be on exhibit until February 14.

Birgitt Lubkemann is a German born artist who first set foot on the Seychelles islands in 1996 when she first visited La Digue, the small idyllic island paradise she now calls home. The artist met her husband of 23 years on her second day on La Digue.

Alongside Ms Lubkemann’s work are also some pieces by Praslin artist Raymond Dubuisson. The pieces, all of which are centred around fish and marine life, are also available for sale.

The accompanying photographs by our photographer Thomas Meriton show some of Ms Lubkemann’s work on display in the exhibition. 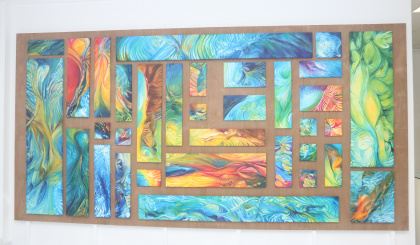 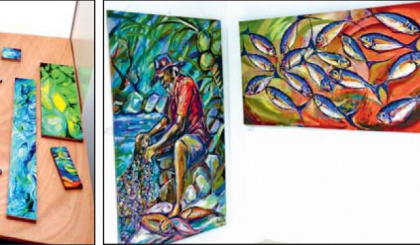