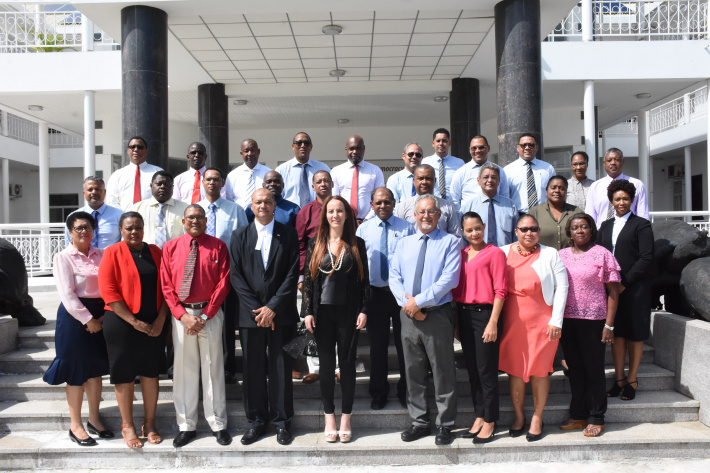 Members of the National Assembly in a souvenir photograph with Mrs Barron (Photo: Joena Meme)

In her historic first address to the National Assembly, the President of the Inter-Parliamentary Union (IPU), Gabriela Cuevas Barron, urged parliaments to become more inclusive for both women and youth.

Mrs Barron is the youngest and second women president of the century-old IPU and has worked actively to promote laws on human rights, gender equality, the fight against corruption, transparency and environmental protection.

Established in 1889, IPU is the largest and oldest parliamentary organisation and, according to Mrs Barron, is about to reach universal membership.

“IPU has been setting the table for very important disputes and is becoming a very important factor in terms of mediation and finding solutions,” Mrs Barron noted at the start of her address.

In her address, Mrs Barron continuously stressed that democracy and human rights have been the principles driving the IPU and are best way to take decisions for countries across the globe.

She noted how the world now faces a number of challenges like inequality, poverty, hunger, human rights violations climate change and conflicts.

One of her most poignant message from her address was that “politics need to change in order to deliver good results for the people that we represent”.

“We cannot expect to rule the planet of the 21st century with institutions that were designed centuries ago. Things are changing; communication, technology and the new generation is demanding more participation,” Mrs Barron highlighted.

“We need to understand and we also need to adapt to these new challenges,” she told the members of parliament (MNAs).”

The first challenge for parliaments, she continued, is how to include women in the legislative process because the world needs to hear the voices of its entire people.

“If we are to take a look at the statistics worldwide, there are only 24% of the seats for women. The world is in parity, it’s a 50-50%, but when it comes to take decisions on law, projects and policies, that is not inclusive. We need more women in politics because we need all people’s voices represented here.”

Mrs Barron said that the same applies for the youths, who are even less represented in parliaments.

More than half of the world’s population is under 30 years yet they remain the least included demographic in legislative institutions, since youths only hold about 2.2% seats in parliaments worldwide.

“That is not okay, that is not an inclusive democracy,” Mrs Barron.

Addressing the young members of the Seychelles National Youth Assembly present, Mrs Barron noted that they have the opportunity to ensure that they are included in the political landscape and in the parliament.

She urged them to start becoming more active in politics, in their communities and help change the planet.

She recounted how she started out in politics when at the young age of 15 years when she joined the National Action Party (PAN), the main opposition force during Mexico’s transition towards democracy, because she wanted to bring new ideas to politics.

After which she became the youngest elected parliamentarian at the age of 21.

“We need fresh ideas, we need new approaches, and we need your perspectives to take better decisions,” Mrs Barron said.

She explained that the challenges she faced as a young female parliamentarian has become the driving force as to why she advocates for women and youth engagement in parliaments.

“We must bring women and youth to the international arena, and the best bridge to do that is through national parliaments,” she added.

Nonetheless, regardless of age, Mrs Barron noted that we are the generation that has to take a very important decision to save our planet, especially given the worldwide tension such as democracy versus authoritarianism, multilateralism versus unilateralism.

“We need to take politics seriously and put person at the centre of all our decision. The only way the economic debate makes sense is when we think about how this is going to affect people.”

On his part leader of government business, Charles De Commarmond, said: “We are particularly proud that today you are addressing our Parliament. To the best of my knowledge, you are the first woman President of the Inter-Parliamentary Union and the first youngest woman President of IPU to officially visit Seychelles and address our National Assembly.”

“While we grace your presence among us, we also hope that your same presence will inspire our women in Seychelles especially the young ones to take up such important challenges and participate more on the local political echelon. In Seychelles, women representation at the Judiciary is better than that of the National Assembly and Executive today.”

Representing the leader of the opposition, chief Whip, Jean-François Ferrari, added: “Strong parliaments are the cornerstone of democracy and essential for national development. We are proud to be part of the IPU, an organisation that that helped and encouraged our own institution as well as many other parliaments around the world to become more representative, gender-balanced, younger, transparent, accessible, accountable and effective”.

“We are also very ambitious for the future. As we continue to build this important institution, we pledge our efforts to establish a relationship of trust with our constituents, the people we ultimately serve. If we can achieve this, we will have succeeded where others have failed and our work and efforts will have been worthwhile. And we can say with confidence, Madame President, whether the Seychellois public appreciates fully the changes we have brought and the progress we have achieved or not, this sixth parliament has been immensely active compared to its equivalents in many other countries.”

This year marks the 10th year anniversary since the Seychelles National Assembly joined the IPU.

After the session, Mrs Barron had the honour of planting a sapling on the grounds on the National Assembly. 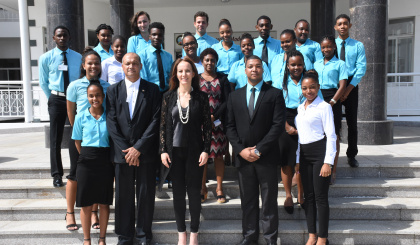 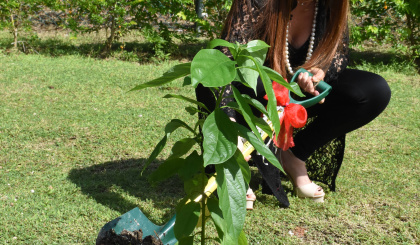 Mrs Barron planting a sapling on the grounds of the National Assembly (Photo: Joena Meme)