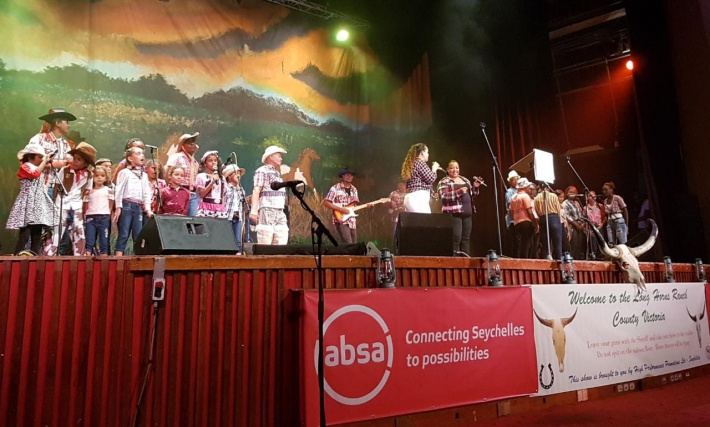 A scene from the show

The show was opened by Minister Jean-Paul Adam who is on his way to greener pastures further afield. The connection with Minister Adam is Seychelles Alzheimer’s Foundation (SAF) has been working closely with him at the Ministry of Health to set up better facilities for Alzheimer’s disease sufferers.

Dame Lise Church, the chairperson of SAF, then came on stage and explained the reason for the show and the new CD dedicated for this cause but unfortunately the video equipment at ICCS failed to operate, notwithstanding the audience managed to get the gist of why we were staging this show.

The Triple X Country Project is made up of three parts, the first part consists of producing a new CD which has been completed and the CD is currently on sale at various outlets. The second part is the staging of this country hoedown and the third part is the procurement of a pedal steel guitar to substitute Jack Yokowo who passed away 2 years ago and sadly left no one else in Seychelles who can play the pedal steel guitar, also known as the Hawaiian guitar, which is an essential instrument in producing authentic country music sounds.

The music began with some cute little voices

Then the music started with tiny attired cowgirls and cowboys aged 5 to 8 from the Children’s House Montessori Pre-school singing and dancing to songs like ‘Sing me an old fashioned song’ and ‘Cotton fields back home’. This was a sight to behold as the audience was awed by how well they had trained and mastered the art of stage showmanship. Usually at this age they are shy but not this little lot who delivered their vocal rendition with such veracity. We witnessed the youngest in our society singing and dancing to raise funds for the oldest in our society which pleased the audience very much. Their tutor, Miss Jess, must be congratulated for her hard work.

The stage was then occupied by girls and boys, mostly girls, from Mont Fleuri secondary school who duet ‘Let your love flow’ with Benjamin Tirant, the drummer in the backing band. Then they produced some beautiful harmonies in a duet with Barry Laine called ‘Golden Ring’ which is a story of how fickle relationships between couples in marriages can become. The Mont Fleuri singing team had been groomed by Miss Cheryl who is herself a choir singer and the harmonies produced on the new CD was recreated live on stage to the delight of the audience’s discerning ears.

The show was compered by Martin Kennedy who is a master with words and Martin then introduced on stage one of our new up and coming country singer called Kelly Mathiot who moved around the stage as if she owned it while she delivered two beautiful songs – ‘Coat of many colours’ made famous by Dolly Parton and ‘Honky Tonk’. Kelly has a big voice for such a small body frame and it is just a matter of her being able to display her talents that we will acquire some new country singers in Seychelles.

The show moved up a gear as the Angels Choir, tutored by Cecile Payet, came on stage to deliver ‘Dance the night away’ as a duet with Hank Didon. Angels Choir is a real pleasure to listen to their harmonies even when they sing country songs they are comfortable because the choir is made up of different age groups which makes their harmonies very melodious and pleasing.

The stage was again the platform for the next country girl singer called Emily Esparon who looked at home in her cowgirl attire complete with cowgirl hat especially imported for the show. Like Kelly, Emily is one of our future country singers we must provide opportunities for them to showcase their talents. Emily sang two songs – ‘Broken Wings’ and ‘You ain’t woman enough to take my man’ – and the audience loved her and called for more, but they will have to wait for the next show.

Then Martin introduced one of our seasoned singers called Octavie Prosper who has been singing all manner of song genre but when it comes to country songs Octavie has the voice for this kind of music. She had just arrived back to Seychelles from a trip overseas and no one detected any jet lag in her voice because she is a professional performer who sings nearly every weekend at various venues in Seychelles. Octavie duet with Hank a song called ‘Don’t let me cross over’ and then went on to duet ‘Every Little Thing’ with Barry Laine.

The stage was then given over to some young dancers from Port Glaud primary school. The dancers were Joy Holder and Erine Quatre, both aged 10 years old, who delighted the audience with some energetic line dance routines to the song ‘AckyBreaky Heart’. Then they were joined by Jeremiah Holder, the twin of Joy Holder, to line dance to a song called ‘Boomerang Line Dancing song’. It was a joy to watch these 10-year-olds expose their line dancing talents. Line dancing, which originated from the USA, is fast catching on around the world from China to the Philippines to UK and many countries. Seychelles cannot be left behind when we have such talented young dancers in our schools.

Then another pair of line dancers came on stage and demonstrated their version of line dancing this time from the Mont Fleuri secondary school. If it had not been for the school holidays we would have had many more schools doing line dancing in the show but alas we had been shown that our schools can rise to the challenge and produce some entertaining line dancers.

The show came to an intermission when all artistes gathered on stage and sang a world renowned peace song called ‘Una Paloma Blanca’ translated as ‘One White Dove’. Yes we need peace in the world and the artistes and musicians in this show rendered a powerful version of this song to the delight of the audience before they went out in the lobby for something to eat and drink.

The second half of the show

The second half started with Barry Laine getting the audience to yodel to a song called ‘Mocking Bird Hill’. Audience participation in any concert is fun and the yodelling by the audience was really something else but they thoroughly enjoyed it, calling for more.

Then Herna Payet came on stage and delivered her version of ‘Don’t be angry with me darling’ aided by Hank who by then had become very energetic and then Herna was joined by Barry Laine to duet ‘What goes on when the sun comes down’ to the delight of the audience.

Then Kelly Mathiot came on stage and delivered her version of ‘What part of NO don’t you understand’ which is a well-known country song and Kelly was outstanding in her performance.

Now enters Pat Nanty with his version of ‘Carmen’ and the audience loved him because Pat is a well-known country singer singing regularly with the band Amigos at various venues. Pat then followed ‘Carmen’ with another song called ‘Live Laugh love’ giving the audience a feel of Latin American atmosphere.

Following Pat, young Benjamin Tirant playing the drums while singing ‘Today I started loving you again’ and Martin commented this was like doing several things at once because playing the drums is hard enough but singing at the same time takes the word ‘multi-tasking’ to a different level.

The audience acclaimed when David Andre came on stage and delivered his version of ‘Help me make it through the night’ and they would not let him off stage until he delighted them with his version of ‘Knock knock knocking on heaven’s door’ which he got the audience to chip in with him in the Chorus.

The show was coming to an end but not until Beryl C. Payet had delivered her beautiful version of ‘Just someone I used to know’ backed by harmonies from 3 lovely Hummingbirds Harmony singers from the Ministry of Environment who provided some powerful harmonies for several songs in the show. Then Beryl went on to duet ‘Island in the stream with Hank’ before the Finale when everyone came on stage and got the audience to join in the song ‘Beautiful Sunday’.

This was a show to remember and SBC filmed the whole show which hopefully they will transmit soon. Unfortunately the heavy rain that night kept many people at home and they will have to watch the show when SBC transmits it.