Ms Vijay-Kumar among other delegates who took part in the poetry and writing festival (Photo source: Ms Vijay-Kumar)

Seychellois poet Magie Faure-Vidot Vijay-Kumar has recently been awarded the Peacock oPinion Award, which is the highest level of honour (honour level 1) that is offered to a writer by Motivational Strips – the largest global writers’ forum.

This was during a two-day poetry and writing festival held at the Parvathaneni Brahmayya Siddartha College of Arts and Science in Andhra Pradesh, India at the end of last month.

The festival, which showcased different pieces of motivational writings and poetry, cultural, artistic and dance performances was attended by several dignitaries from a number of countries including the founder/chairperson of Motivational Strips, Global Writers’ Hub, Shiju H. Pallithazheth.

So far the Motivational Strips has awarded this level 1 honour to Kairat Duissenov Parman and Carlos Hugo Garrido Chalen, the two icons who head the world’s largest Unions – World Nations Writers Union and Union Hispanomundial de Escritores. Apart from that the honour was bestowed to Destinyy Lightt Speaks, a young lady who lives only to encourage writers and cheers them to carry on moving their pens.

During the festival Ms Vijay-Kumar was honoured by being invited to make a   presentation to coincide with the International Conference on Contemporary World Literatures held between December 19-20, 2019.

The aim of such a conference bringing together a large group of poets and writers is to create a scope for exchanging intercultural ideas and understanding. 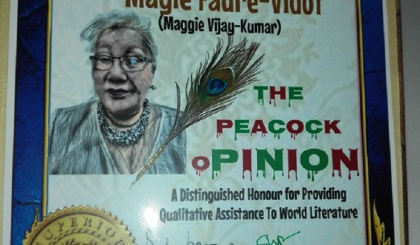