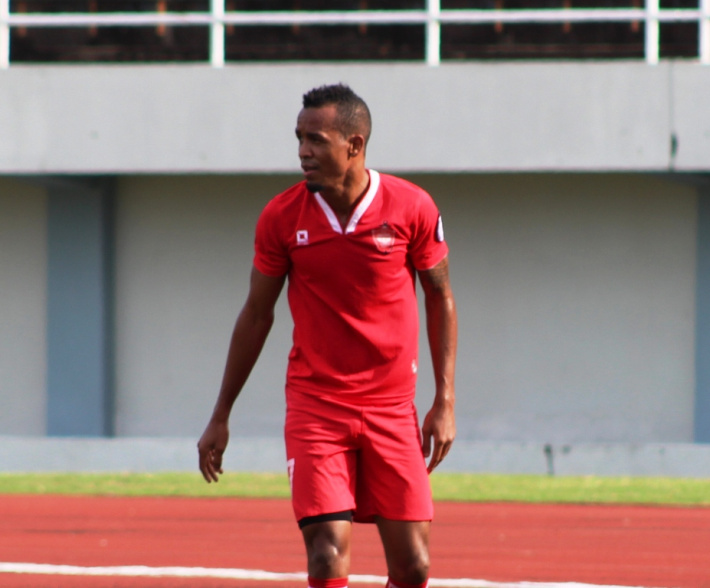 Red Star Defence Forces avenged their league defeat to Northern Dynamo with a convincing 4-1 triumph at Stad Linite on Saturday afternoon in a SeyPearl premier League match inspired by a hat trick by substitute Darrel Damoo.

Red Star Defence Forces, who had knocked this same opponent out of the Airtel Cup in a penalty shootout, started brightly and Malagasy Jocelyn Fenosoa forced Northern Dynamo goalkeeper Ricky Pool to punch out his curling free kick as early as the 10th minute.

The army team though had to replace Kieren Sinon in the 22nd minute through injury and in came Darrel Damoo who had just arrived with the national team from Bangladesh after taking part in the Bangabandhu Gold Cup tournament.

Damoo broke the deadlock for the players of coach Cliff Nolin in the 34th minute from Barry Marie’s floated cross which he headed into the bottom corner past goalkeeper Pool to make it 1-0.

Four minutes later, Damoo bagged his brace after Aubrey Farabeau had surged forward past defender Errol Bastienne to pick him out with an inch-perfect cross which he headed into the top corner for a 2-0 lead.

Dynamo responded to this double blow in the 39th minute when Harim Evenor set up Gambian forward Musa Njie who cut inside a defender and his low shot came off the foot of the post of goalkeeper and captain Danny Larue.

The northern Mahé team cut the deficit on the stroke of half-time from Malagasy Rajamana’s lofted corner which was headed home by defender Maurice Ahmed for a 1-2 score at the break.

The second half was marred by controversy such as in the 56th minute when Red Star Defence Forces goalkeeper Larue fouled Ahmed Maurice in the penalty area. Referee Alix Bonne consulted with his assistant James Emile before issuing a yellow card to the army team goalkeeper but surprisingly he did not award what would have been a penalty for the foul and Dynamo chairman Nigel Michaud-Payet expressed his anger at the officials and he was booked.

In the 58th minute at the other end, Damoo completed his hat trick from defender Bastienne’s mistake as he failed to intercept Andrew Onezia’s cross allowing Damoo a free run and shot on goal to make it 3-1.

Dynamo were again hard done by the officials in the 65th minute when they appeared to score a good goal which was unfortunately ruled out by assistant referee James Emile.

It all began when Bastienne linked up with Joshua Adeline whose shot from the edge of the penalty area was spilled by goalkeeper Larue onto the post and Rajamana punished him as he drilled the loose ball into the net but assistant referee James Emile flagged for offside much to the disgust of the Dynamo players and their chairman Michaud-Payet, who was angry with the officials, had to be restrained by his players before he was given a straight red card by referee Bonne and the commotion continued and play was halted for almost five minutes.

When play resumed, Red Star Defence Forces went close to score in the 79th minute as Jocelyn released Damoo who rifled his shot against the crossbar in a clear goal scoring position.

Dynamo suffered further misery when Francis Moumou was given his marching orders in the 88th minute for his second bookable offence as he lashed out at Malagasy Tojo in an off-the-ball incident.

Red Star Defence Forces continued to push for more goals and in the 91st minute, former Dynamo player Marcus Maria picked out a cross-field pass from Onezia to fire at goal but his shot ricocheted off the post.

In the 94th minute, Dynamo goalkeeper Pool made a double save to deny Maria and Damoo but Jocelyn then sealed this emphatic win as he thumped the ball past Pool to round off the scoring at 4-1 which delighted his manager Philip Barbé as they had once again overcome a tough opponent.

“Dynamo is always a difficult opponent but the two early goals settled the nerves of our players and they grew in confidence for a very good win,” manager Barbé told Sports NATION.

As for Dynamo chairman Michaud-Payet, he was very annoyed with the officials and thinks the federation should investigate occurrences in this encounter.

“The officials were catastrophic as they punished us a lot but I find it strange that teams knew who was going to officiate this match well in advance and I feel strongly that the federation must investigate this whole match,” the Dynamo chairman related to Sports NATION.