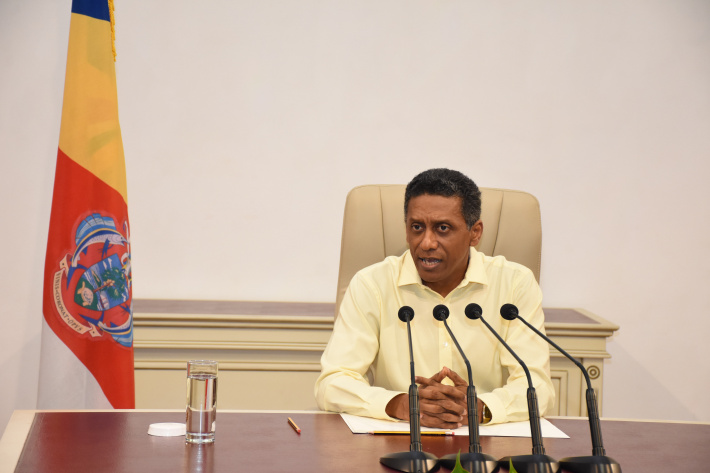 ‘There is no urgency to name my running mate’

“There is no urgency to make an announcement about my running mate at this point in time because as the ship’s captain I am happy that we are not sailing in treacherous water and will reach the port safely.”

This was said yesterday by President Danny Faure in his first live press conference for the year.

President Faure added that he understands that some United Seychelles (US) supporters want to know the name of his running mate, but “at the same time, the supporters who believe in me know very well that I deliver on all the promises I make”.

He explained that after his party (US) has endorsed the name of the candidate to be his running mate, he will make the announcement publicly.

Answering a question about the length of time allowed under the Constitution for an elected President to take office, since according to the same question a new government is likely to be elected, President Faure said: “I firmly believe that the presidential election will be run in a peaceful atmosphere and ten people will be happy.”

He added that there is harm in revisiting the law.

(a)         beginning with the date next following the date of the declaration of the election of President; or

President Faure said he decided to take the responsibility of the health portfolio following Jean-Paul Adam’s resignation as minister because he doesn’t see the opposition-dominated National Assembly voting on any of his choices.

“I twice sent the names of people to the National Assembly to be approved as ministers and each time the request was met with disapproval. I won’t do it a third time and this is why I have decided to take on the health portfolio. If I could feel that the National Assembly would approve the nominees, I would have nominated someone, but I don’t feel they would have done it.

“Health is now a department but the structure remains the same with the principal secretary, Dr Bernard Valentin being responsible for policy, monitoring, evaluation and infrastructure. Dr Jude Gedeon is the public health commissioner and his work is directed by a board, while the Health Care Agency under chairperson Daniella Larue and chief executive, Dr Danny Louange, is responsible for the administration of all health centres and the Seychelles Hospital. I will give all these structures the support they need to achieve their objectives,” said President Faure.

A president who understands the people’s aspirations

President Faure explained that he understands the aspirations of the younger generation since many people come to see him to not only talk about issues but possible solutions.

“Seychelles has a brilliant future. I understand the aspirations of the people because I am a president of the new era,” claimed Mr Faure.

As to the disappearance of two young soldiers on Assomption island, President Faure noted that the investigation has been completed and the file is with the Attorney General’s office.

President Faure reiterated that it is not the responsibility of his office to investigate the disappearance of the US $50 million and any other such claims.

“This is the responsibility of the Anti-Corruption Commission and I have personally tried to provide them with more human resource and an expert from the European Union is working with them right now,” said President Faure.

He noted that although it is true that we all want such cases to be resolved at the earliest, there remains the investigation part which takes quite a long time. In the meantime, we should not lay blame on people, accusing them of being thieves. If anyone has proof that someone has committed an offence, they should report to the Anti-Corruption Commission which will initiate an investigation.

Mr Faure added that he has already instructed Attorney General Frank Ally to prepare an amendment to the Constitution to add the Anti-Corruption Commission. The amendment will then be sent to the National Assembly for approval.

Difficulties of the offshore sector

With regard to discussions between the French government to remove Seychelles from the black list, President Faure pointed out that the French government has agreed to send two experts here so they can see for themselves on the ground so as to better understand the work being done by local authorities to improve the situation. President Faure said he is confident that in the coming four to six months the country expects to solve the matter through discussions between the Ministry of Finance, the offshore sector and the French Department of Finance.

Cable & Wireless (CWS)—there are reports that a deal has already been reached with Seychelles Pension Fund (SPF), and why the government allowed the transaction in the first place when there were so many unresolved issues with the Liberty Global including the case of the 30 employees who were made redundant…

President Faure stated that he is hopeful the case of the employees will be resolved soon through negotiations with the new owners of CWS. With regard to the transaction between CWS and SPF, President Faure stated that an amendment in the SPF regulations has been effected to ensure an oversight by the Minister for Finance to resolve the point of contention and the President has confirmed that SPF has now bought around 330,000 shares which is equivalent to 22%, before it was for 20% for US $24 million but now it has been finalised at US $24 million for 22% in CWS and this represents investments by SPF for all its members who are working Seychellois and this is a good investment according to President Faure.

With regard to the problems with Liberty Global, the President highlighted that there was a total sum of US $16.5 million pending and through discussions the Ministry of Finance carried out, a sum of US $14 million was paid back to government on December 31 last year and the remaining balance was settled through the exchange of properties at Le Chantier and Bon Espoir, the latter government will now use to build the drug rehabilitation centre.

Criteria used by government before a new policy is adopted, if all propositions are closely analysed and if yes why so many issues resulting in the parcel delivery chaos

In most cases policies start in the ministries but the issue in this particular case is related to deficiencies in implementation of the policy like the Minister for Finance explained and this has resulted in a delivery chaos and widespread public frustration. This has led the government to withdraw the policy and government has learnt a lesson from the experience.

Measures being considered to improve the environment to foster development, growth of local businesses

The private sector is doing very well and has a big role in the economic development of the country but it continues to complain of difficulties and the different challenges it is facing. President Faure stated that the government and other concerned authorities are working closely with the sector to continue improve the environment to remove barriers impeding business development and growth.

But President Faure highlighted the fact that based on economic indicators it is clear that policies of the government of the day, the contributions of all workers and operators in the sector that are driving the development and growth of the sector.

President said he is following the situation closely. He said he has talked to the two students in Wuhan to reassure them. He has called on all Seychellois to listen and remain up to date with information and advisory from the local authorities noting that he is satisfied with efforts underway locally to inform the public and measures being put in place to deal with any suspected cases.

In the coming weeks a regulation which will be favourable for everybody is expected as this is being finalised by the Attorney General’s office.

“I wanted all Seychellois to have an additional two days annual leave which I consider a good thing considering the high level of development the country has reached. I believed the opposition would have understood that but it is regrettable that they have sided with employers. The country has done a lot and is still doing a lot for employers,” the President highlighted. He noted the issue of sick leave which benefitted employers and it was time for employees who work hard for the economic development of the country to benefit from an additional two days leave.

President Faure highlighted that other than its high cost for the Seychellois public, telecommunication infrastructure is among the best on the African continent.

“Yes, there is a problem with the high cost of telecommunication and this is an issue which I intend to address on February 20 in my State-of-the-nation address,” President Faure stated.

As for the presence of Mr Savy, President Faure stated that he was in the official delegation to take part in discussion to seek funding for a coastal management project, the plan of which has been supported by the European Union to the tune of US $15 million. “It was an opportunity to explain to the Bahraini authorities the coastal erosion problems our outer islands and main islands are facing in order to try and secure financial assistance to address these concerns. The Bahraini government is ready to help Seychelles,” President Faure said.

Following his recent meeting with key leaders of the police force, President Faure said he had a good meeting and he is happy the police understand the challenges the country is facing and they all agreed that we need a more professional police force and services, a need to review numerous existing laws, the regulation on tinted glass for instance needs to be reviewed so it does not depend on the discretion of the police commissioner.

Every six months the commission is expected to send its recommendations on actions it wants the government to pronounce itself on . “Once I receive the official documents containing the recommendations from the commission, my office will communicate to the Seychellois public,” President Faure pointed out.

Deplorable road condition in the south

President will ask SLTA to communicate the information as to when the resurfacing project will start now that the PUC project to install the new electricity cables has been completed.

Incentives for Seychelles Institute of Agriculture and Horticulture students

A new policy and scheme has been finalised for those students who have completed their studies at the Seychelles Institute of Agriculture and Horticulture.

“The law is now ready after it was recently approved by the National Assembly but we need to work to ensure we have all the necessary structures in place working closely with all operators before implementation starts,” President Faure said.

Other questions that President Faure answered were related to employment contract, the methadone programme, compensation for ex-army officers, the country’s preparation for any possible economic costs from the coronavirus impact, declaration of assets, the state of Long Island, the drug concerns, the possible appointment of a Seychellois as the President of the Court of Appeal on which the President said a decision is yet to be taken until all the requirements have been met. 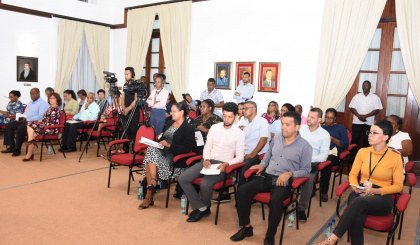 A partial view of journalists and other guests at the press conference (Photo: Louis Toussaint)