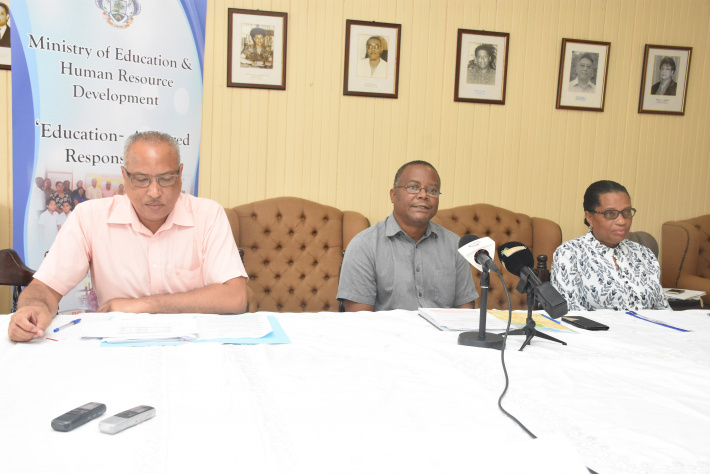 The officials speaking about the exams results during the press conference yesterday (Photos: Jude Morel)

The Ministry of Education and Human Resource Development yesterday held a press conference in which the Primary 6, IGCSE, DELF and Advanced Level Studies (A-Level) exam results for the year 2019 were presented.

The School of Advanced Level Studies (Sals) is pleased with the performance of the candidates in their final University of Cambridge International examinations, completed in October and November 2019.

Of the 104 candidates, 28 students obtained the required level of points – 18 – for progression to further studies while others attained 12 to 16 points.

It must be noted that the group to sit for last year’s exam was the last group to sit for 18 examinations. The group currently enrolled at Sals and subsequent groups will have a choice of ten facilitating subjects including Chemistry, Computer Science, Mathematics, Geography and History.

“The Sals staff, whether the subjects are there or removed, are fired up to bring the business and I can tell you that regardless of which subjects are on offer, the strategy is the same, the bottom line, the standards are the same. Being leaner means we may have more time on our hands to concentrate further into the subjects,” Mr Omondi, Sals’ head, concluded, stating that he is confident that there will be a great improvement in academic achievement at the school in future.

Detailing the results of the P6 National examination results director for Examination and Certification, Kevin Telemaque, noted that a total of 1315 pupils enrolled to sit the six examinable subjects, namely, English, French, Creole, Mathematics, Science and Social Studies compared to 1348 in the previous year. However, around 1293 actually sat those examinations on average, representing 99% of the cohort population.

According to theMinistry of Education and Human Resource Development, the results for this year are rather mixed with a slight increase in performance in most subjects with students performing better in languages as opposed to Mathematics, Science and Social Studies.

Despite the improvements, general performance level still remains much below the set standard as students are still struggling to meet the ministry’s benchmark of obtaining 50% or more in principal passes (Grades A* to C) in each subject.

Furthermore, it should be noted here that in 2018, the proportion of principal passes in languages fell significantly, despite still being higher than those of Mathematics, Science and Social Studies.

From the schools’ perspective, seven schools surpassed the set standard in at least one subject and one school in particular performed above the set standard across all six subjects; in the range of 52% to 76%.

In terms of satisfactory passes, meaning Grade D and E, the number of satisfactory passes increased slightly over 2018, being in the range of 28% to 38%, compared to 24% to 37% in the previous year, and the proportions of students not obtaining a pass grade remains at 10% over the last two years.

“There are many initiatives on the part of the ministry to boost students’ performance and a lot of resources allocated to schools. Education is a shared responsibility and the performance means schools are compelled to analyse results and draw up a plan that they feel can help to improve academic performance within their respective schools,” Mr Telemaque noted.

Two subjects reached the 50% target, in 2019. These were First Language English which remains the subject where students perform better, with 80% of them scoring grade C or better.

There was a general increase in performance in IGCSE results in 2019 compared to 2018. However, with the continuing support of their parents and school personnel, students will need to increase the level of hard work, for even better results.

Senior assessment development officer for International Exams, Arnold Chang Pen Tive, said performance is mainly the same as 2018 and highlighted the numerous efforts by the ministry to improve attainment levels nationally through the introduction of online training for teachers to broaden their knowledge in their respective subjects and improve teaching.

As for DELF examinations, senior assessment development officer, Zitabella Labiche, noted that the majority of students experience difficulties with oral comprehension across all schools and proposed more training and use of authentic texts in classrooms to enable students to improve memorisation and their note-taking skills.

A total of 1338 students were registered to sit examinations in English, French, Mathematics, Science, Geography and History in 2019 compared to 1279 in the previous year. However, 1250 actually sat those examinations on average, representing 93% of the cohort population.

The Ministry of Education and Human Resource Development would like to state that the results for this year are varied.

In general, there has been a slight increase in the number of principal passes in certain subjects in 2019, namely in French, Geography, History and Mathematics. Even if English is a subject where student performance is relatively better than other subjects, it must be noted that the performance for English for 2019 has dropped by 3%.

PS gives update on first week of school and reopening of School for the Exceptional Child | 23.05.2020