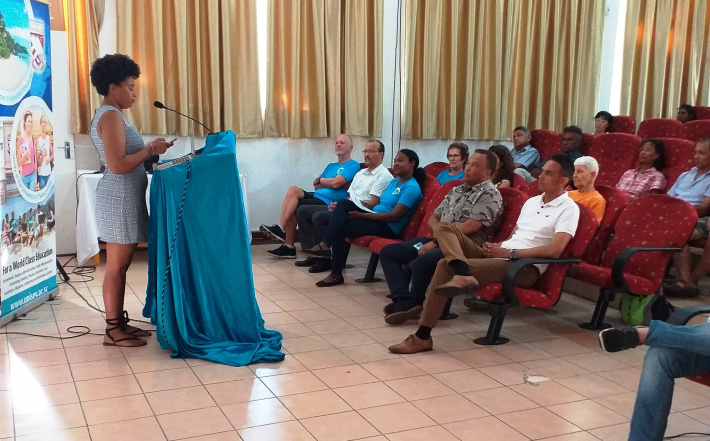 Stakeholders in environment protection, conservationists, students, climate change activists gathered at the University of Seychelles (UniSey) at Anse Royale on Friday morning to talk climate chaos in a day-long conference and other activities like workshops and exhibitions.

Hosted by the UniSey, the event, the result of a collaboration between key climate stakeholders, is the first of its kind to be organised here.

Its aim is to raise awareness on the chaos around the world being caused by climate change namely the extreme weather conditions – floodings, bushfires, sea level rise – and the need for more environmentally conscious actions and initiatives to try and mitigate the effects of climate change.

Described as a flexible conference, participants, interested members of the public, secondary and post-secondary students all had the opportunity to view several exhibitions, listen to various presentations and academic talks.

But why climate chaos? The extreme global phenomena is affecting the world more and more violently with disastrous effects. Participants were able to interact with each other, with the different stakeholders, presenters, schoolchildren to exchange views, share their concerns and know how each feel about climate change and what it is all about and what they are doing in their own way to mitigate the effects of climate change.

Ms Alcindor noted in her opening remarks that such an event aims to bridge the gap between generations and create a good platform to learn from each other.

She highlighted that climate actions should not only be left to NGOs or government agencies.

“It is everyone’s business to deal with issues that arise as a result of climate change as well as try to reduce our own carbon footprints. As individual we can all make a difference,” Ms Alcindor stressed.

Herself an active youth engaged with various youth groups, Ms Alcindor noted how she has over the years witnessed how youth and youth movements in Seychelles have gained national recognition and credibility.

These are from basic campaigning, awareness raising to participation in policy-making and climate negotiations.

She commended NGOs like SYAH Seychelles that provides the platform for youth capacity-building, to explore and develop their skills and make meaningful contributions and impact.

She also commended the Ministry of Environment which has actively been a role model in supporting youth participation in decision-making in numerous ways.

Active in promoting SDG12 which addresses responsible consumption and production, Ms Alcindor explained the different related actions and initiatives she has been promoting and how she herself tries to make responsible decisions in her personal consumptions.

Victorin Laboudallon, well known environmentalist and the founder of Terrestrial Restoration Action Society of Seychelles (Trass), travelled all the way from Praslin to share his experience through the different initiatives, namely reforestation, he has led to help mitigate the effects of erosion and land degradation caused by climate change on the environment.

Mr Laboudallon noted that from his long experience in conservation, he has observed a lot of changes in the climate where for instance on Praslin from Anse La Blague to Anse Lazio coastal erosion has severely affected the beach which is now more rocky than sandy.

He noted that every one of us should be concerned by climate change and should be aware and conscious of its effects in our everyday life and he has invited members of the public to take part in the different actions that Trass organises.

Young Arnaud Perine, a secondary student from English River school, said he came to the conference to learn more on climate change.

“It is a phenomena which is affecting people the world over and Seychelles has not been spared as the effects are all around us,” he said.

“I am hoping that after the time I spend here I will learn some things which will help me make some changes in my actions,” he said.

A presentation by Peter Brinn from the Global Climate Change Alliance Plus (GCCA+) entitled ‘Why should we care about climate change?’ got everyone present to reflect deeply on the issue and this through a very interactive session with the active participation of an intergeneration group to highlight the fact that climate change affects different people in different ways depending on who they are. For instance a pupil, a youth and a senior citizen will not be touched in the same way.

Mr Brinn highlighted that in order to care about climate change we need to understand it because climate change, he stressed, is not the same as the weather.

“It is a much bigger phenomena,” he said, adding that science shows that we humans are contributing to the change through our actions and activities like burning fossil fuel.

The different presentations included video presentations as well as question and answer session with the aim to better understand the climate change phenomena.

Sophie Morgan, another climate change activist, enthralled the audience with a song dedicated to Mother Earth entitled ‘Save Me Now’ while a group of young pupils also gave a performance dedicated to the planet.

Meanwhile different organisations involved in environment protection, nature and energy conservation had set up small exhibition stands to better enlighten the public on what they do.

The accompanying photographs show some highlights of the event. 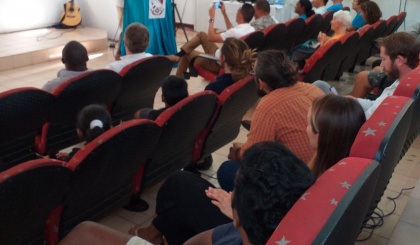 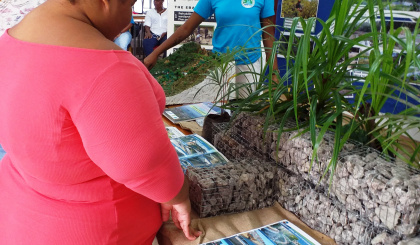 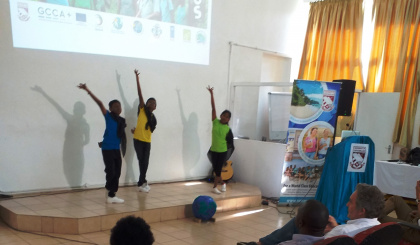 A performance dedicated to the planet 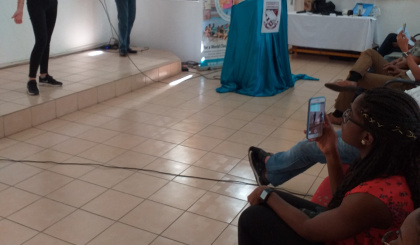