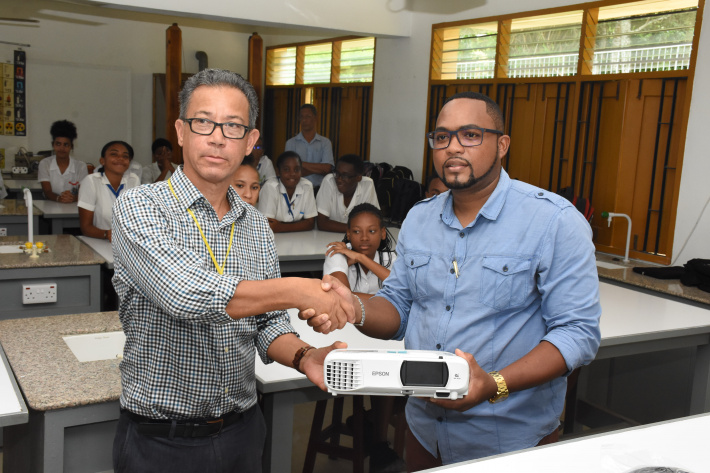 The four science laboratories of the Mont Fleuri secondary school are equipped with a ceiling projector thanks to the generosity of Lindsay Talma, a former Seychelles College student of the 1960s and teacher.

The Mont Fleuri secondary school (ex Seychelles College) has since 2019 been working in close collaboration with Mr Talma to install a ceiling projector in each of the four science laboratories. These would be linked via an HDMI cable to the teacher’s desk where he or she could then plug in a laptop and display prepared lessons from the desktop.

On Friday morning, Mr Talma, a retired Seychellois science and information communication technology (ICT) teacher living in the United Kingdom (UK), was present at the school to conduct a chemistry session with S5(1) students in order to test one of the four ceiling projectors along with an additional software that was installed on Wednesday. The four ceiling projectors and accessories, amounting to around R40,000 was a sponsorship by Mr Talma and his wife Vijaylaxmi Talma, who is also a science teacher.

Also present at the session were the principal secretary for early childhood, primary and secondary education in the Ministry of Education and Human Resource Development (MEHRD), Dr Odile de Comarmond, head teacher Marc Arissol, Mont Fleuri district administrator Jency Volcère, the school council chairperson Sharon Telemaque-Ernesta, and other officials from the ministry and staff of the school.

Speaking to the media, Mr Talma said that the benefit of this teaching technique in this day and age is that laptops could be linked wirelessly to a server where work could be shared. He noted that it would allow staff to share common lessons and good practice including instant access to a range of teaching materials on line and off line.

He explained that rather than focus on lesson preparation and copying of notes on the board, the teacher would be free to control the class by engaging the students, and providing appropriate work to the full range of abilities in the class.

Mr Talma said that on a few occasions he had had the privilege to observe a few science lessons in some secondary schools in the country and was struck as to how very able teachers were stifled by the lack of technology that most schools in the UK have had for the last 20 years.

“So I decided to initiate a pilot project using such practice in schools here,” said Mr Talma.

Mr Talma said that during the past five months, he has downloaded and tweaked a range of lessons for S1 to S5 students and will continue to do so until his next visit in June 2020, when he will assess the feasibility of the project.

He noted that he had had the acknowledgment of President Danny Faure for the possibility to further introduce the style of teaching to other schools in collaboration with the government.

“It will allow a teacher to use common standards, but still have the flexibility for them to stamp their own styles on the lesson,” he added.

It was Mr Arissol who accepted the other three ceiling projectors for installation and on behalf of the school, Petra Volcère from S5 thanked Mr Talma for his donation and noted that it will further improve their learning.

“The way he uses the variety of resources available including those on the internet, you get to understand more while visually seeing the lessons on screen than what you could have learned coming from the mouth. I believe that if teachers adopt this style of teaching there will definitely be improvements in our results at the end of the year,” said S1 student Christie Rath.

Mr Talma on his part called on the students to be disciplined in their studies and to always find time for extra studies at home.

Before leaving Seychelles for the UK, Mr Talma had taught at various educational institutions in Seychelles including the National Youth Service (NYS). 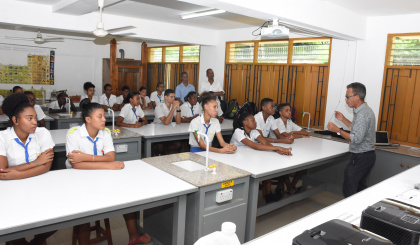 Mr Talma running a class with S5(1) students to test one of the ceiling projectors (Photo: Louis Toussaint)