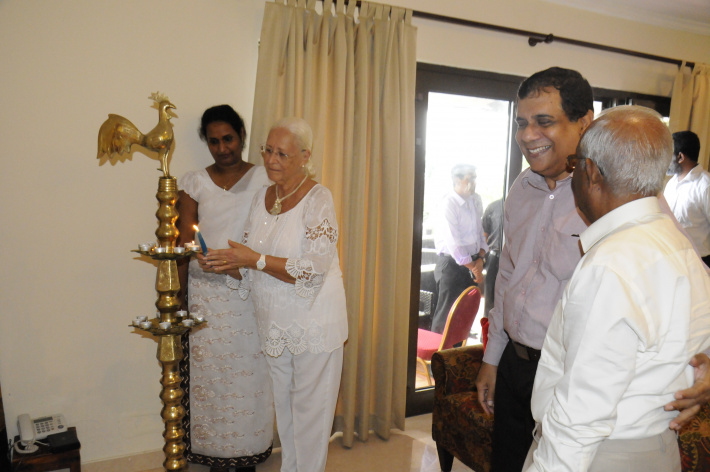 The lighting of the traditional oil lamp by Mrs Azais (Photo: Patrick Joubert)

The Sri Lankan community in Seychelles yesterday celebrated the 72nd Independence Day of their country in an official flag raising ceremony followed by a reception at the Sri Lankan high commissioner's residence at Carana.

Friends, including the ambassador for the Order of Malta, Francesca Alexandra Azaïs, and the first honorary consul for Sri Lanka, Radley Webber, joined in the celebrations.

The ceremony to mark Sri Lanka’s 72nd anniversary started with the hoisting of the national flag in the courtyard by chargé d’Affaires Tharushi Gunathilake on the rhythm of the Sri Lankan national anthem. This was followed by a minute’s silence for the departed.

Members of the Sri Lankan community and their guests then headed back inside the living room of the residence where Mrs Azaïs had the honour to lead the lighting of the traditional oil lamp. The ceremony continued with prayers from the different religious denominations present, namely Buddhist, Christian, Hindu and Muslim.

After concluding her welcoming speech, Ms Gunathilake read a message from Sri Lankan President Gotabaya Rajapaksa. The message was read in both Sinhala and Tamil languages.

Sri Lanka sealed its long standing bilateral relations (32 years since) with Seychelles by the opening of the Sri Lankan embassy in Seychelles in June 2014 during the first visit of the then President of Sri Lanka, Mahinda Rajapaksa to our islands. The two countries have engaged in numerous talks and co-operation in the field of health, education, tourism, environment, fisheries and maritime security among others.

Previously known as Ceylon, Sri Lanka, with Colombo as its capital, gained its independence from the British on February 4, 1948. 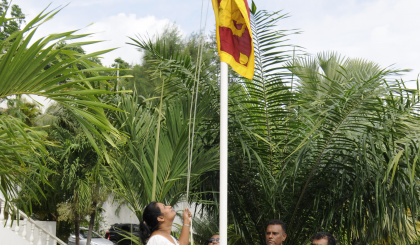