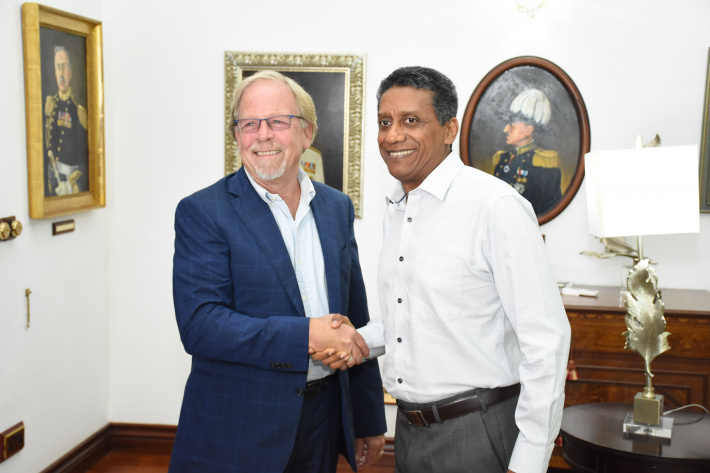 Seychelles is expected to get World Bank (WB) and other international specialist expertise to help it better address the coastal erosion problem affecting the country.

The international body is expected to send these experts here in the coming months to study the problem in its entirety.

Mark Lundell, the WB’s country director for Seychelles as well as other countries like Mozambique, Madagascar, Mauritius, Comoros, and the Africa region, is currently in the country and yesterday morning he held talks with President Danny Faure at State House.

Speaking to the press, Mr Lundell described his talks with the Seychellois head of State as very productive focusing primarily on the challenges of climate change and its damaging effects resulting in coastal erosion around the country.

Mr Lundell reminded the press that Seychelles sought the World Bank assistance last year to help it address the problem and his visit yesterday was also to update President Faure on progress made thus far.

“The issue is very complex but we are trying to bring the best experts from within the World Bank as well as other international specialists to try to focus on this as a priority issue. The WB will be mobilising people as quickly as possible in the next month or two before looking for as much development partner financing as possible because there exists already a coastal zone erosion investment plan that was developed and finalised in the latter half of last year,” Mr Lundell pointed out.

He went on to note that the WB needs to bring in as much financing to initiate that as quickly as possible and gain momentum to encourage other development partners educated on the impacts of climate change on small island states to bring in addition financing so that the full plan can be carried out. While on the ground the experts will closely study and analyse the complex issue of coastal erosion to determine if it is sheer volume of higher wave action or a shift in currents …

The potential to tap into the Green Climate Fund, though a lengthy process was also discussed.

Mr Lundell noted that the first phase of the plan that was elaborated last year amounted to some US $15 million to carry out but that the needs can always go in excess of that and only about a third of that sum has been fully secured.

The blue economy was also an issue that was on the table and Mr Lundell has expressed the WB’s satisfaction with the Blue Economy Council and its recent meeting whereby decisions on the ocean economy were taken particularly in relation with the Blue Investment Fund and the Blue Grant Fund.

“We are pleased with the progress being made and the very good inter-ministerial cooperation that the Blue Economy Council has brought together,” Mr Lundell highlighted.