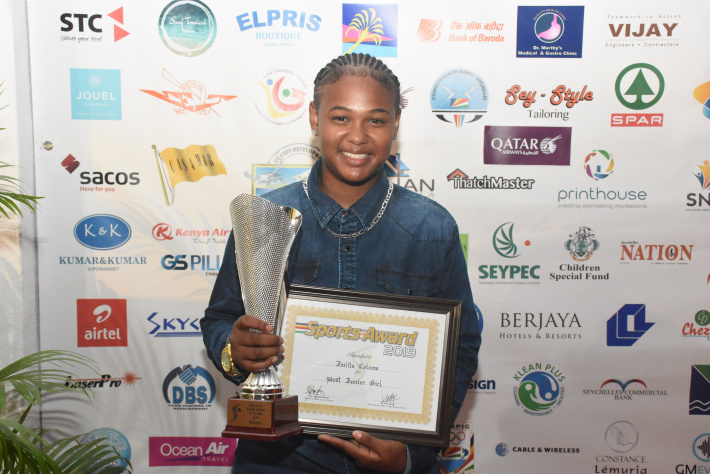 ‘Nothing’s impossible, as long as you remain focus and work hard to achieve your goals’

At only 16 years old, iron girl Joelita Coloma brought home a couple of international medals in 2019, earning her enough credit to be crowned as the year’s Best Young Female Athlete.

Inspired by local elites Janet Georges and Clementina Agricole, Coloma who practiced mostly all sports in her earlier days wasted no time in making a name for herself during her short weightlifting career.

In 2019, her main exploit was at the African Junior and Youth Weightlifting Championships in Kampala, Uganda where she won six medals – three silver and three bronze.

In the 76kg group, Coloma snatched 55kg before lifting 70kg in clean and jerk for an overall total of 125kg, earning her the second overall spot in the group and three silver medals in the youth category.

The result also earned her three bronze medals in the junior class.

She was also in action at the 10th Indian Ocean Island Games in Mauritius where she won one silver and two bronze medals in the 81kg category.

Locally, she competed at the National Championship where her performance was 68kg in snatch and 85kg in clean and jerk for a total of 153kg.

Coloma received her award from Thomas Dauban, the director for human resources and administration at Cable & Wireless last Friday, during the traditional Sports Awards ceremony, held at the NSC Multi-purpose Hall at Roche Caïman.

In the process of starting her post-secondary education, Coloma willingly dropped by the Seychelles NATION office to share her hard work and success of 2019.

Sports NATION: Were you expecting to win the Young Female Athlete of the Year title?

Joelita Coloma: To tell you the truth, I was not expecting as there were other young athletes who performed really well in 2019, including in weightlifting. So, it came as a surprise for me. But I am very happy for winning it.

Sports NATION: How would you describe the 2019 season?

Joelita Coloma: It was not an easy year, as we all worked hard to achieve results. I had to train very hard as there were other young athletes who were also striving to come out on top.

Sports NATION: What can we expect from you this year?

Joelita Coloma: My target is to keep training hard and better my performances as I want to defend the title. Nothing is impossible, as long as you remain focus and work hard to achieve your goals. Nothing comes as easy as well, but as long as you work hard, results will keep coming.

Sports NATION: So, is defending the Young Female of the Year title a priority for you?

Joelita Coloma: Definitely. I am still 16 years old, so I still have enough time to work towards my goals.

Sports NATION: What are the main difficulties you encountered in 2019?

Joelita Coloma: The main problem I encountered in 2019 was constant fatigue, due to my excessive training. I kept pushing and pushing myself to better my performances and this impacted on my body, giving me muscle pain all throughout.

I was so eager to upgrade my performances that I did not realise I was causing more damage to myself, rather than doing good. I had limited resting time and this also contributed towards the pain and fatigue.

Other than that, I do not recall having any other big difficulty during 2019.

Sports NATION: Why did you choose weightlifting as a sport?

Joelita Coloma: During my earlier schooldays, I practised mostly every sport, until I started to admire Janet (Georges) and Clementina (Agricole) and I talked to my mum about it. Then I saw my friend Chakira Rose on the television and I contacted her, asking for information and guidance about how to start weightlifting.

Following her advice, I went to the Freedom Square gymnasium where I met with coach Macdonald Henriette who briefed me about the sport. From then on, I have kept working hard until now.

So, to tell you the truth, it is something from within, or a calling. Nobody ever asked me to do it, or anything like that. It was just something that I personally wanted to do.

Sports NATION: What do you want to achieve in weightlifting?

Joelita Coloma: My dream is to perform at the Olympic Games. I am aware of all the sacrifices needed to reach such a level and I am ready to work for it. It is not an easy thing to achieve, but this is what I have as a major goal, even if the chance of winning a medal is far from being realistic, but at least competing at such level would be enough for me.

Sports NATION: Other than your hard work and devotion, who do you attribute your success to?

Joelita Coloma: My three coaches – William Dixie, Macdonald Henriette and Reginald Estro – have been instrumental behind my achievements. My mother is my biggest fan and her support really contributed a lot. My friends and teachers have also supported me, so I will say I had quite a good group of people behind me.

Sports NATION: Being still a teenager, how do you handle all the successes and fame?

Joelita Coloma: For me, it is nothing special, life goes on as usual. The only difference is that winning such a title reminds you that you have reached a certain level and you need to work harder to first, maintain it and secondly to improve it.

Sports NATION: Other than being a good lifter, do you think you have the ability to be a good role model?

Joelita Coloma: Yes I can. I will take myself as example. Before joining weightlifting, I was not having a disciplined life. I was easily influenced, especially in doing bad things. Since joining the sport, I have changed drastically and even my friends at school have noticed a big difference in me.

So, I will encourage the youth to stay away from social ills and instead, take up sports.

It will not only help them physically, but it will also mould them to be a better person in life. 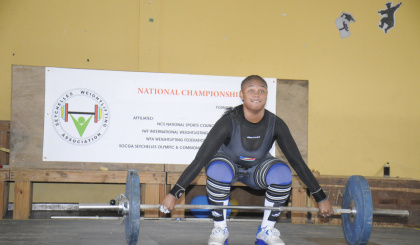