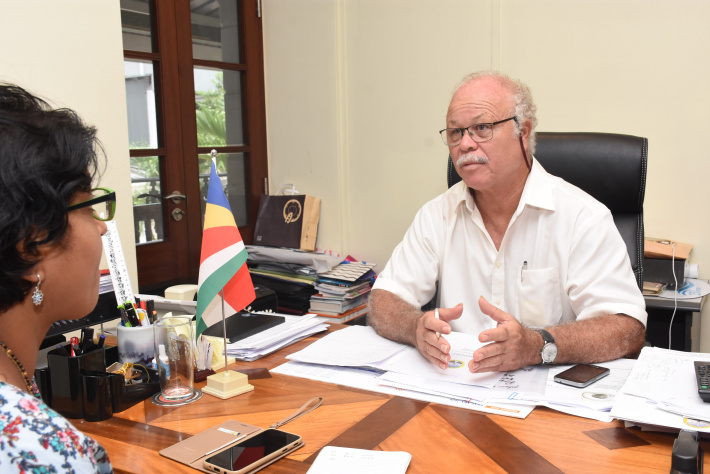 As of January 1, 2020, David Andre has accepted a second term of three years as Mayor of Victoria.

Mr Andre is the fourth Mayor of Victoria and the only man out of the lot.

Seychelles NATION: How did your first term go?

Mayor of Victoria: My first three-year mandate has been quite challenging and interesting at the same time. Most important for me at the beginning was to try and situate the work of the Mayor in Victoria. As you probably know the previous mayors were people who were nominated directly by the President and it was more or less like a figure head and the role was not quite definite in terms of authorities and powers. Whereas for my term it was slightly different as I was the first one that has been elected by the eight members of the National Assembly representing the eight districts of Victoria. All the eight members elected me and that was interesting. It gives me some kind of a focal point where I can situate myself with the different districts of Victoria and discuss and negotiate with people in the different districts on what are the needs. The role of the Mayor is also to work closely with the authorities such as the government, members of the National Assembly, the district administrations to be able to reach to the population. It is all about service delivery and what we want for the town, which is basically what we want for the eight districts. What do we do to make Victoria a cleaner and safer place is a concern for all the districts. We managed to set up a dialogue among the different authorities and we managed to create the Victoria Forum regrouping different stakeholders. Together we can map out what can be done in Victoria in regards to traffic, vibrancy, security, cleanliness, among others.

Seychelles NATION: What are the main challenges?

Mayor of Victoria: In Victoria, as we all know and see, we have issues with alcohol, drug addicts and prostitutes. The Victoria Forum, a gathering of different agencies and institutions, allows us to find solutions to these issues. For example we brought in awareness about the sale of alcohol in Victoria. Although there is a lot of work to be done as the implementation is concerned, I hope we will find solutions to these problems. I do not like to see drunk people walking down the streets of Victoria and dirtying the place. These are some of the challenges I faced and together we will see how to solve them.

Seychelles NATION: Any changes in Victoria?

Mayor of Victoria: As far as service delivery is concerned, the market in Victoria is a place well visited by locals and tourists alike. The place needed some tidying up and discipline. We had some problems with rain and during my mandate, the Mayor’s office worked with the agricultural department and got part of the ‘bazar’ covered up. Right now work is still ongoing. In terms of sanitation we managed to cater for that.

Another achievement in Victoria is having a place where people can come and chill and towards the end of my mandate, we finally set up La Passerelle with a harbour café and a music kiosk. This one is the perfect example of a private and public collaboration. It was not very easy and this project practically took all my energy. With that project there is also the public toilet, which was a much needed facility in Victoria.

Seychelles NATION: Does the office of the Mayor have any international collaboration?

Mayor of Victoria: On the international scene, Victoria is a member of the United Cities of Local Governments of Africa (UCLGA). Victoria is an executive member of this organisation and we have had the chance to attend many conferences on various topics such as climate change, blue economy, sustainability, tourism and culture. We have learnt and shared practices from different countries. I also had the privilege as an artist as well to write the hymn for the UCLGA.

We are also a member of the Association des Villes et Collectivités de l’Océan Indien (AVCOI) and we also had a meeting here last year. We got very good partnership with the town La Possession in Reunion Island and we got twinning programmes with Port Louis, Rivière Noire, Quatre Bornes and Curepipe.

Seychelles NATION: What are your major plans for your second term?

Mayor of Victoria: There are lots of things that need to be reinforced such as traffic control in Victoria, keeping Victoria clean and also maintain what is working. One of my major issues in Victoria is safety and cleanliness. I feel that there are more negligent people around. I would also like to develop other parts of Victoria as well. I have some ideas for the Peace Park and together with the Land Waste Management Agency and the Ministry of Environment we are trying to see how best we can make good use of that area.

I am also promoting the planting of more fruit trees around Victoria and we need to be guided by the appropriate authorities.

Seychelles NATION: Will you be promoting more arts/music in Victoria?

Mayor of Victoria: I am working closely with the association of musicians, National Arts Council and Cinea and we are preparing a calendar of events. We will be using La Passerelle as one place, the National History Museum and if things work out well also the Peace Park to promote these activities.

This year we are also celebrating the 250th anniversary of the first settlement in Victoria and the town will be very busy. The main programme will be on August 27, but we are also working with Cinea on various other activities such as a mini-jazz festival with artists coming from other countries too.

Mayor of Victoria: I would like to thank all the partners, agencies and individuals who work closely with me and to help keep our little town safe and vibrant. Victoria belongs to everybody and I would like it to live up to the reputation that it is indeed the Creole capital of the world. If we work together, I think we can be very proud of our little town.”