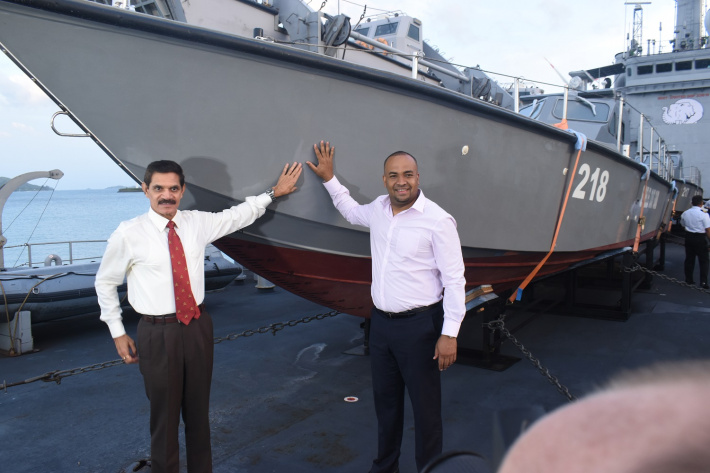 Two Wave Rider Inshore Patrol Crafts (WRIPC) gifted to Seychelles by the Sri Lankan government in February last year, have arrived in the country and been delivered to the government of Seychelles.

The two patrol boats have been transported here by the Indian Naval Ship INS Airavat especially deployed to honour the request of the Seychelles government for the transshipment.

INS Airavat was scheduled to reach Seychelles on January 28 but it was diverted to Madagascar as a ‘First International Responder’ to undertake a major Humanitarian Assistance & Disaster Relief (HADR) and to help the island nation in the aftermath of the torrential rains and floods there.

It is to be recalled that the two patrol boats were donated to Seychelles as per the request of President Danny Faure during bilateral discussion with the then Sri Lankan President Maithripala Sirisena during his State Visit to Seychelles in October 2018 coinciding with the 30 years of establishment of diplomatic relations between Sri Lanka and Seychelles.

Vice-President Vincent Meriton received the two patrol boats and visited the shipyard where they were being built during a visit to Colombo in February last year.

It was the minister responsible for environment and climate change, Wallace Cosgrow, who accepted the two patrol boats on behalf of the government during a reception onboard the INS Airavat on Tuesday evening hosted by the Indian high commissioner, General Dalbir Singh Suhag and the vessel’s commander Sunil Sankar.

During the same transshipment mission, the INS Airavat also brought in a consignment of Indian marine equipment and stores in the form of spares for the Seychelles Coast Guard (SCG) all on grant basis. This will ensure operability and sustainability of the SCG ships in the months to come.

“I am sure the professional team of the SCG under the abled overall leadership of the Chief of Defence Forces will benefit from these stores and spares,” HC Suhag pointed out.

He went on to highlight the fact that the year 2020 has got off to an excellent start for relations between India and Seychelles.

“The engagements in defence cooperation, hydrographic survey and the blue economy achieved through the Indian Naval Ship Darshak, have been reinforced by the visit of INS Airavat. This has been an excellent start of an everlasting innings between India and Seychelles,” he stated.

HC Suhag went on to point out that the Indian HC through the Indian Navy is looking forward to add more chapters to the strong and ever-growing maritime cooperation with Seychelles and other countries of the region.

“Collective action and cooperation will best advance peace and security in our maritime region. It will also prepare us better to respond to any emergencies and support in the region,” he remarked.

He also noted that next month we shall again be witnessing the visit of Indian Navy Ships as part of the First Training Squadron of the Indian Navy which shall be carrying all important spares and other major stores which are critical for the day-to-day operations of the SPDF and the SCG.

HC Suhag expressed heartfelt gratitude to the Sri Lankan HC, the department of Foreign Affairs, the Chief of Defence Forces, the SPDF and most importantly the professional team of the Indian Naval Ship Airavat for the successful transshipment of the patrol boats.

Thanking both the governments of Sri Lanka and India, Minister Cosgrow commended the excellent working relations which have resulted in the excellent arrangements to ensure the successful transportation of the two patrol boats.

He said the boats will be used by the SCG for coastal surveillance operations.

“India and Seychelles are neighbours in the region and we share the same priorities in the management of marine resources, food, water and energy securities as well as the same sense of urgency when it comes to maritime safety in the Indian Ocean,” he highlighted.

Minister Cosgrow noted that the relationship between India and Seychelles is very strong and has even greater potential to be further deepened and developed in a wide variety of areas.

“While we are optimistic for the future partnership between our two countries, we would continue to cherish the invaluable contribution provided by the government of India to Seychelles in its socio-economic development,” Minister Cosgrow stressed before highlighting the different areas receiving assistance from the Indian government namely financial assistance through grants that is geared for the construction of the new police headquarters and forensic lab, for the construction of the Attorney General’s office and the Government House to name but a few.

Minister Cosgrow and HC Suhag then proposed a toast to the continued prosperity of the friendly people of the Republic of India, to the solid relations of friendship, solidarity and cooperation that exist between the two countries as well as the prosperity and well-being of the people of Seychelles and the long-standing, very strong and deep relations between the two nations. 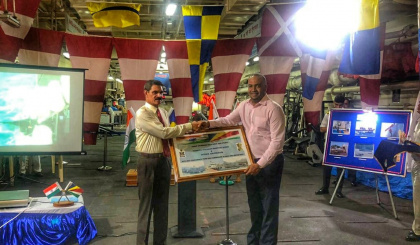