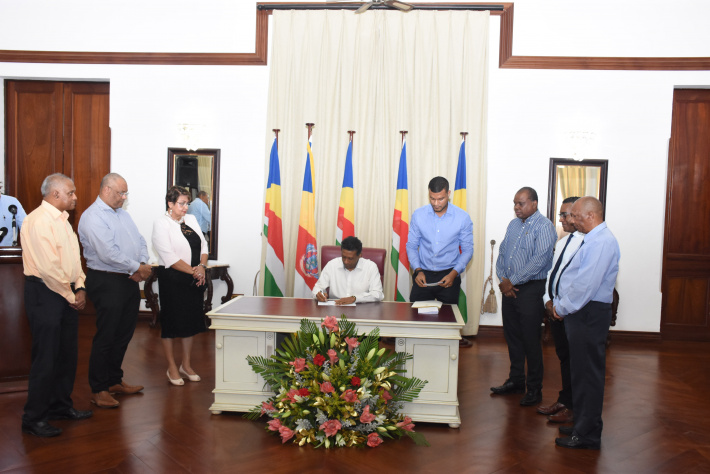 This will be possible now that President Danny Faure has signed the Seychelles Maritime Safety Authority (SMSA) Act 2019 and the Merchant Shipping Amendment Act 2019.

This was during a short ceremony at State House yesterday morning which was witnessed by the Designated Minister Macsuzy Mondon; the Minister for Tourism, Civil Aviation, Ports and Marine Didier Dogley; the Attorney General Frank Ally; key government, SPDF, coastguard and Seychelles Ports Authority officials.

Addressing all present after the signing, Minister Dogley stated that the SMSA Bill has gone through a long consultative and participatory process both locally and internationally with the ultimate aim of providing the country with the best possible legal framework to manage and administer maritime safety and to meet our country’s obligations under the International Maritime Organisation (IMO) and other maritime agreements that we are party to.

It was in 2004 that the government decided to separate the then Ports and Marine Services Division into two organisations. The first became what we know today as the Seychelles Ports Authority (SPA) – the government’s body responsible for the management of all commercial ports in the country, and the second the Seychelles Maritime Safety Administration (SMSA) remained under the ministry responsible for maritime affairs as a division.

The SMSA became the body responsible for regulating and administrating maritime affairs, safety and security and developing policies in line with our national needs and also our international obligations.

In 2016, following an audit conducted by IMO experts on the existing maritime governance framework, various weaknesses in our existing administrative set up and processes were highlighted.

“The area of particular concern had to do with the manner in which we were administrating various provisions under various conventions and protocols,” Minister Dogley pointed out.

He noted that in their final report they recommended the creation of a single authority that will be responsible for regulating, managing and administering maritime affairs and safety.

“The new SMSA and the Merchant Shipping Bills 2019 are therefore critical pieces of legislations which will enable us to meet the requirements of a modern maritime governance framework,” Minister Dogley explained.

It is to be noted that through these changes, the provisions of the Merchant Shipping Act which fell under the responsibilities of various persons and organisations including the minister responsible for maritime affairs, the harbour master and the SPA, will now be under the management of the Seychelles Maritime Safety Authority.

Minister Dogley explained that by concentrating such responsibilities under one organisation, it will be easier to regulate and administer maritime safety provisions and rules and meet our obligations under a wide range of international maritime agreements, protocols and conventions.

Apart from maritime safety, it will take on new responsibilities.

“It will be responsible for issuing and administering licenses for boats above 10 metres as well as issuing identification numbers for boats less than 10 metres but its responsibilities will not include fishing boats as this will remain under the responsibility of the SFA,” Minister Dogley highlighted.

The SMSA Bill makes provisions for the creation of the authority itself and its board of directors, it outlines its functions which are very broad, it spells out the procedures and conditions to appoint the chief and deputy chief executives, it provides for an appeals committee among other provisions.

The Merchant Shipping Act Cap (282) has been in existence since 1992 and it is a very complex but comprehensive piece of legislation that covers maritime administration and safety as well as a wide range of maritime conventions and agreements.

“Together with the new SMSA Bill it defines the role, functions and powers of the new authority. Through the Act the SMSA is empowered to regulate and enforce maritime legal provisions, rules, procedures and conditions,” said Minister Dogley, noting that there was a need to harmonise the two Bills by introducing the new concepts and provisions provided for in the SMSA Bill in the Merchant Shipping Act.

Minister Dogley also highlighted that they used the opportunity to update all the fines and penalties under the Merchant Shipping Act.

He noted that the enactment of these two pieces of legislation will enable Seychelles to make major strides in strengthening its capacities in developing the blue economy.

Meanwhile Minister Dogley has stated that it now remains for the responsible minister to specify the date that the provisions of the two pieces of legislation will come into force.

Asked if the new authority will have the capacity to handle its new responsibilities, Minister Dogley said the ministry is currently working on its structures and its different departments. He said the authority currently has 16 members of staff and talks are underway to review and assess the manpower, and other operational needs of the new authority.