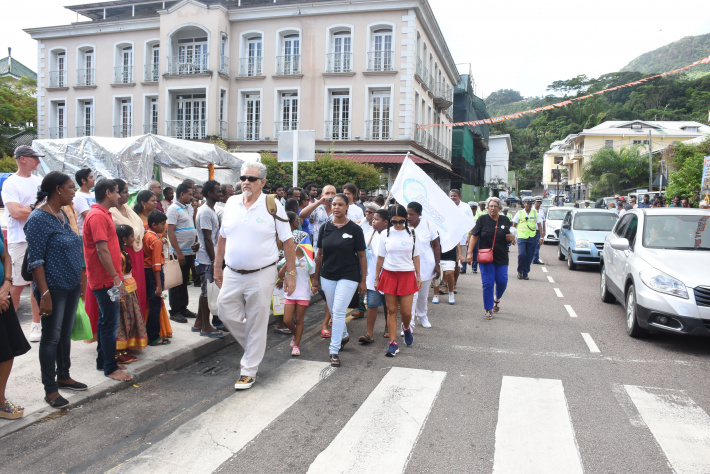 Members of Preserve Seychelles, an association aimed at protecting the country’s sovereignty, held a march through the streets of Victoria on Saturday, to make their voices heard regarding protecting Seychelles’ sovereignty from foreign forces, most notably to protest against a possible Indian military facility on Assomption island.

Kicking off at Stad Popiler at 9.30am, the march wound its way through Revolution Avenue and Quincy Street where it clashed with the Thaipoosam Kavadi Festival observed by the Hindu community in Seychelles, before making its way to the Speaker’s Corner, near the Post Office, to pronounce themselves on the matter.

Chairperson of the association, Julia Morin, noted that the march was not intended to be confrontational or offensive to the Hindu community as it may have appeared to passers-by, and that the association had already received approval from the Commissioner of Police since January 6 for the march along the route.

She further noted that she called an official from the police to clarify upon seeing the advertisement for the festival and was informed that it was a simple mix-up and that approval for the Kavadi festival was sought a few days prior to the event.

“Initially, we had organised the march to commemorate the day that we gathered in town against any foreign military facilities being constructed on Assomption Island. Simultaneously, it became apparent that the budget allocated to the Ministry of External Affairs of India, features an allocation for a project on Assomption and the amount allocated is not justified for a small coastguard facility, which we are being led to believe will be constructed there,” she said.

“The issue is that last year, the budget allocation featured an allocation for a project in the Mauritian archipelago Agalega and as we have seen, this has happened. We want answers from our government and not for them to just keep quiet,” Mrs Morin noted.

“The government on Saturday allocated Rs 100 crore for the strategically-located Chabahar port project in Iran and Rs 140 cr to Seychelles where it is developing infrastructure in the Assumption Island” (para. 1) and goes on to state “The allocation to Seychelles has also gone up substantially as last year’s budget allocation was Rs 50 crore” (para. 2).

The sovereignty of the Seychelles islands is of utmost importance to members of Preserve Seychelles who are also calling for other leaders of political parties to pronounce themselves on the matter. In fact, Mrs Morin claims that prior to Saturday’s march, leaders and representatives of all political parties, were invited to join the association at the Speaker’s corner to voice out against the possibility of an Indian-owned military facility, although the only one present was Alain St Ange of One Seychelles.

“Our aim is to protect the sovereignty of our islands while also adhering to the treaty to keep peace within the Indian Ocean region which is not possible if we have military facilities from large super forces. In line with this vision, Preserve Seychelles is in partnership with Le Mouvement Réunionnais Pour la Paix, who are in support of the association’s vision and activities, including Saturday’s march in the interest of all Seychellois,” Mrs Morin added.

While the turnout was not as great as anticipated, Mrs Morin noted that the association is happy as the people who did show up are as passionate about protecting the island’s sovereignty as members of the association are.

“Now that this is an election year, we need to ensure as citizens that we find out as much as we can so we can make informed decisions and I think it is important for political parties to come forward to the public to pronounce themselves on it,” she said.

Mrs Morin also expressed disappointment that local media houses did not show to cover the event, except for Seychelles NATION newspaper, deeming the matter of sovereignty as one of importance to all citizens and to the future generations to come.

Meanwhile, in an article entitled ‘India not funding any development on Assomption’ published in this same newspaper on Tuesday February 4, 2020, the department of foreign affairs and Indian high commission in Seychelles confirmed that the Indian government is not funding any development on Assomption island. This followed publication of the article in question by The Indian Express.

Speaking to Seychelles NATION, Ambassador Barry Faure, the secretary of state in the department of foreign affairs, confirmed that “there is no foreign military presence or the construction of an India military base on Assomption island”.

“The agreement with India provides for joint maritime surveillance facilities, but has not been ratified by the Seychelles’ side. The Seychelles government is thus moving ahead with the establishment of a national coastguard facility on the Island,” added Ambassador Faure.

The Indian high commission in Seychelles also confirmed that next year’s budgetary allocation to Seychelles is for catering to the different developmental projects including three national priority projects of Seychelles, namely the attorney general’s office, the police headquarters and the government house, apart from the magistrates court project which is on the verge of completion.

The Indian high commission added that there are also high impact community projects under phase one which are at various stages of completion now.

Also work on phase two of the community development projects and on the 2000-pax capacity state-of-the-art Mahatma Gandhi International Convention centre would begin during the next financial year.