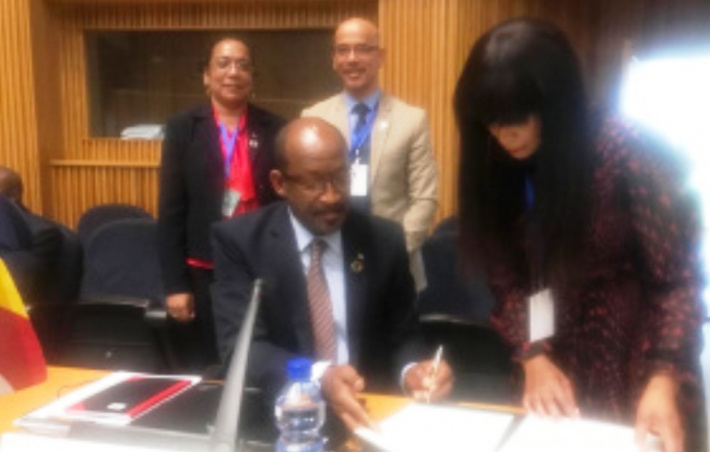 On February 8, 2020, Seychelles acceded to the African Peer Review Mechanism (APRM), and became the 40th member of this continental mechanism.

Vice-President Vincent Meriton signed the accession document at the opening session of the 29th African Peer Review (APR) Forum of Heads of State and Government convening on the sidelines of the AU Summit in Addis Ababa, Ethiopia.

The country’s decision to join the APRM was approved by the cabinet of ministers last year. This accomplishment is part of the government’s continued efforts and commitments to promoting good governance, transparency and accountability in the country.

In his statement following the signing of the legal instrument, Vice-President Meriton emphasised that the political maturity of the country is reflected through the commitment of President Danny Faure to ensuring the establishment of credible and trustworthy institutions built on principles of transparency and accountability for shared prosperity.

In this regard, Vice-President Meriton stated that “the existing cohabitation between the governing party and the opposition with the majority in the National Assembly depicts the determination of the government and the people of Seychelles to work towards a shared vision through engagement and dialogue”.

Seychelles was congratulated for taking the step to join the APRM by Idriss Deby, President of the Republic of Chad and chairperson of the Forum, Prof. Eddy Malako, chief executive of APRM and fellow Heads of States and Government present at the Forum.

The APRM, established in 2003, is an instrument voluntarily acceded to by Member States of the African Union (AU) as a mutually agreed African self-monitoring mechanism. As at February 2019, 22 base peer reviews and 3 second peer reviews had been completed. During this session Egypt, Djibouti and Zambia completed and presented their second stage of review.

Vice-President Vincent Meriton was accompanied at this forum by Dr Marina Confait, principal secretary for Foreign Affairs, Ambassador David Pierre, permanent representative of the Republic of Seychelles to the African Union and a senior official from the department of Foreign Affairs.