The Truth, Reconciliation and National Unity Commission (TRNUC) continued with its second and last week of hearing sessions for the month of February with two more complainants and two witnesses appearing yesterday.

From Friday February 7, 2020 to Sunday February 9, 2020 midnight ultimatum, given as the deadline for people to file their complaints, the commission has registered approximately 60 new complaints making a total of 423 cases registered so far. It has since August 2019 heard approximately 110 cases, all of which are still ongoing (subject to change).

In setting out his complaint to the commission in Case 0104, Bernard Racombo, an ex-police officer, claimed that in 1983, he was unlawfully evicted from the police force, presumably because he was not a supporter of the regime and also because he had refused on two occasions to follow a political education course conducted by the political party in power.

He said that after his eviction from the police force, he was refused work in government and in the private sector and furthermore was arrested on several occasions on the grounds of being a threat to the state. He alleged that he was first arrested in 1984 as a result of going down to participate in an anti-government demonstration, which he claimed he was not able to attend as he was intercepted in his car before he could reach the gathering, and for that he was fined R1500.

Mr Racombo further said that he was again arrested in 1985 on the grounds that he was distributing anti-government leaflets and for that he spent one and half months in jail at the Central Police Station. He stated that later under a detention order he alleged was signed by former President Albert Rene, he was sent to Long Island Prison for a further eight months’ imprisonment where he claimed the condition was harsh and the nutrition not up to standard.

He said that upon his release along with three other people, they were transported to State House where Rolly Marie, who was in charge of security, offered him a job which if he refused he would either be sent back to prison or had to leave the country.

Mr Racombo stated that he refused the unknown job offer and left the country for political asylum in the United Kingdom upon being granted a one way ticket by a lady. He also claimed that while in England, the Seychelles authority still tried to persecute him by trying to make him lose his job as a security officer with an airport security company at Heathrow Airport.

Mr Racombo is expected back before the commission to give more detail on the preparation of a counter coup he mentioned he was involved in with several other people while the commission investigates his case.

Mats Deutschmann was the other complainant appearing before the commission yesterday afternoon in his Case 081 where he was accompanied by his witnesses, brothers Robert and Luc Grandcourt. He claimed his parents, who came to settle in Seychelles in 1972, firstly at Anse Kerlan on Praslin and later at Grand Anse Praslin, was robbed of their tourism establishment, the Flying Dutchman Hotel, in 1981 through forced compulsory acquisition by the government.

Mr Deutschmann, who came to Seychelles in 1974, said that his participation in the students’ demonstration against the National Youth Service (NYS) in 1979 was part of his family’s victimisation which led to the acquisition of their property. He said that after the students’ march, as a sixteen-year-old foreigner, he was expelled from the Seychelles College and had to continue his studies in England in 1980.

He further said that on April 23, 1980, his parents received a letter from government stating that both parents, including his sister and brother, had their temporary employment passes revoked and that they all had to leave the country within two weeks upon receiving the letter.

Mr Deutschmann said that though his parents knew James Manchanm, they were in no way involved in political activities. He noted that as they had to leave the country, they had nobody to look after the hotel. So they were in the process to formulate a contract with family friend Luc Grancourt to buy the hotel so that it would be returned to them when one day if the situation in the country changes. He stated that the deal in one way or another had reached the government in which it had replied in letter signed by his witness, Robert Grandcourt, that it was transferring the hotel to COSPROH (Compagnie Seychelloise de Promotion Hôtelière) to be managed thus it cannot be purchased by Luc Grandcourt.

He stressed that under duress the family had no option but to sell the ten bungalow hotel situated on sixteen acres of land in 1981, for an offered price on paper of R2.5 million, which after tax fees and other deductions, the family ended up with only around R700,000.

Mr Deutschmann stated that, by being deported and by losing the hotel business, the family was really affected and that was also the cause of his mother and father’s divorce. He noted that his father did come back in 1993 and re-married a local. He said his father also tried to claim back the hotel from government on several occasions but was not successful. He had since died on Pralin in January 2000.

“I know there were restructured reason to redistribute wealth but they did it to the wrong people,” he said, noting that his family did not come to exploit Seychelles but were prepared and also gave everything they had for the country.

He claimed that his family had been left with nothing following the acquisition and that he wanted everybody to know the real story that tore his family apart.

Robert Grandcourt as the witness and who worked as the principal secretary in the Ministry of Economic Planning, Land and Housing, said that during his five years with the ministry, mostly under the guidance of Dr Maxime Ferrari, nearly 30 properties were acquired which also included that of the Deutschmann family.

He claimed that as he knew the Deutschmann family and he also was against the acquisition of their property, he removed himself from the case. He said still he had no option as being the principal secretary he had to write the acquisition letter to the family but stated that he had been ordered to do so by the minister. He noted that the family should be rightly compensated for what they have lost.

His brother, Luc Grandcourt, also a witness in the same Case 081 of Mats Deutschmann, said that he was the one, through his shipping business, who brought the building materials to construct the hotel. He claimed that he had no intention to buy the hotel but he had agreed to formerly buy the property on September 9, 1980 in Switzerland on conditions that it will be returned back to the family when the situation gets better in the country thus he only wanted to help the family, through friendship, to keep possession of their hotel. But the transfer of ownership was not accepted by government. The commission is investigating the case. 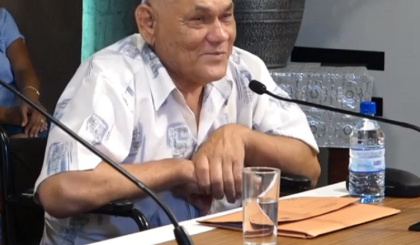 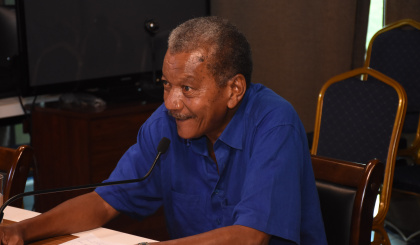 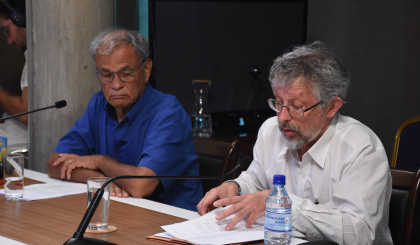