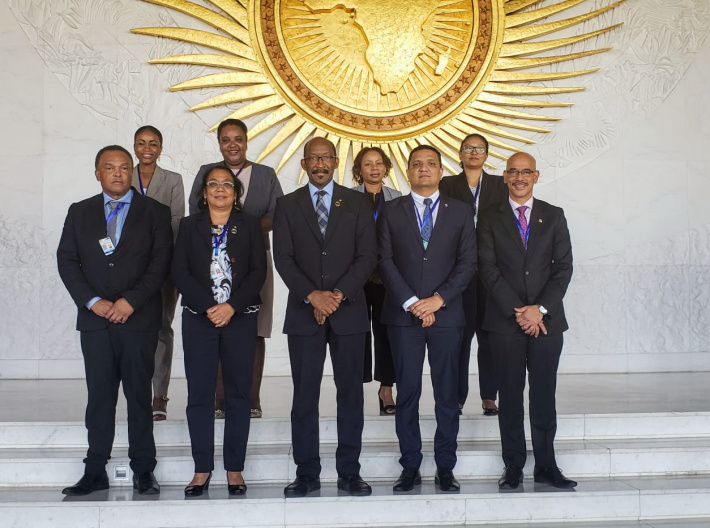 The 33rd Ordinary Session of the Assembly of Heads of State and Government of the African Union (AU), which kicked off on February 9, 2020, came to an end yesterday at the headquarters of the AU, in Addis Ababa.

Vice-President Vincent Meriton was representing President Danny Faure at this year’s Assembly which was preceded by the 36th Session of the African Union Executive Council held from February 6-7, 2020.

The Summit includes the presence and participation of numerous African Heads of State and Government, who discussed over the two-day event different issues of importance to the continent as well as deliberated on a number of reports including those related to peace and security, blue economy and trade.

In concluding the report, Vice-President Meriton called upon the leaders to “be cognizant of the abundance of resources that our continent boasts especially in our oceanic and aquatic spaces, which represent vital opportunities for the prosperity and well-being of our present and future generations”.

Seychelles also officially launched the African Island State Climate Commission on February 9, 2020, whereby the mechanism’s structure and road map were presented to the members of the Commission.

Vice-President Meriton and the Seychelles delegation also conducted a bilateral meeting with Dr Ibrahim Mayaki, CEO of AUDA- NEPAD, pertaining to ongoing cooperation as well as to explore avenues of future collaboration in the field of the Blue Economy, Renewable Energy, Transportation and Cyber Security.

Vice-President Meriton equally engaged on issues of common interest within the bilateral and multilateral realm with Liu Yuxi, ambassador of the People’s Republic of China to the African Union Commission.

Additionally, Dr Marina Confait, principal secretary for Foreign Affairs and Wills Agricole, principal secretary for Energy and Climate Change, held a bilateral meeting with Dr Alastair McPhail, ambassador of the United Kingdom to the Federal Republic of Ethiopia whereby the main discussion focussed on the upcoming COP 26, scheduled in November 2020, in Glasgow, Scotland.