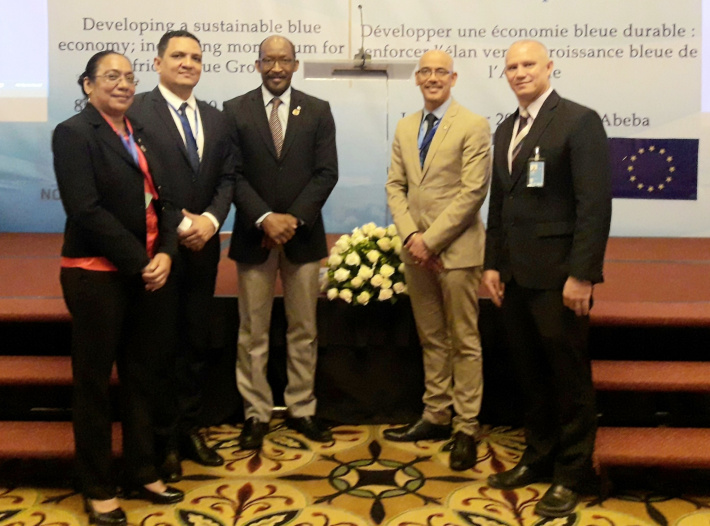 Seychelles’ delegation at the event

“Seychelles has built a global reputation as a pioneer in promoting sustainable oceans-oriented growth,” Vice-President Vincent Meriton has said.

“As a nation, we have recognised and paid very close attention in understanding the principles which the Blue Economy relies on. Those principles are deeply embedded in all of our national development strategies and policies,” Vice-President Meriton said during a high-level event on the Blue Economy held under the theme of ‘Unlocking the full potential of Africa’s Blue Economy - A continental strategy for joint action’.

The event took place on the margins of the AU Summit held in Addis Ababa, Ethiopia.

The development of a sustainable Blue Economy is of strategic importance to implementation of Agenda 2063 flagship projects such as the African Continental Free Trade Area (AfCFTA) that aims to accelerate intra-African trade and strengthen Africa’s common voice and trading position in the global market place.

Having the Blue Economy Strategy will guide the development of an inclusive and sustainable Blue Economy that becomes a significant contributor to continental transformation and growth. This is achieved through advancing knowledge on the following: marine and aquatic biotechnology; environmental sustainability; the growth of an Africa-wide shipping industry; the development of sea, river and lake transport; the management of tourism and fishing activities on aquatic spaces; and the exploitation of deep sea mineral and other resources.

The objectives of the side event were to: