Bryan Anacoura was one of two complainants in open session in case 0170 before the Truth, Reconciliation and National Unity Commission yesterday where he claimed that his transfer from the Seychelles Coast Guard to the Grand Police army camp was not done as per the army transfer norms and that his move was politically motivated.

Mr Anacoura also alleged that upon leaving the army, he was victimised and was thus unable to find work for a long period of time due to him not obtaining security clearance.

Commenting on his transfer from the Coast Guard to Grand Police, he said he was called in the night, along with a group of seven or eight other soldiers, to hand in all their military belongings and they were brought to the Bel Eau army headquarters in their sport clothes and they were locked in a cell and the next morning they were sent to the Grand Police army camp.

Mr Anacoura, who was a lance corporal before leaving the army in 2002 after 12 years of service, said that upon arrival at the army headquarters, they were accused by the then former high ranking army officer, Leopold Payet, and high ranking army officer, Clifford Roseline, who is now Chief of Defence Forces, for being activists for the Seychelles National Party (SNP).

He stated that the incident happened on the night of the presidential election in 2002 and also alleged that they were threatened that they were going to be in trouble if former President Albert Rene was to lose the election.

Mr Anacoura claimed that for every election in Seychelles, the army would always instruct its members as to whom to vote for and noted that they were all instructed to vote for the ruling party. He said that after President Rene won the election, they were moved the next morning to the Grand Police army camp under the guise that they were being transferred. He alleged that the move was politically motivated based on the army’s belief that they had voted for the opposition. The move, he said, was a kind of punishment as the army officials believed that they were affiliated with the opposition. He claimed he had never made known as to which political party he supported and he wondered how they had affiliated him with a political party.

Explaining further, he stated that normally a transfer in the army is done through posting order and noted that in his case, this was not so and furthermore it is not done at night. He claimed that even his officer in charge was not even aware as to where they were that night and that they had been transferred to the Grand Police army camp the next morning. He noted that 14 of them were transferred on the same basis.

Mr Anacoura said that in the army, transfer is made after the defence council panel had met to discuss on the transfers; routine or voluntary transfers, and he questioned whether they had met that night to discuss the transfer issue. He claimed that he didn’t ask for voluntary transfer and he was not even on the routine transfer as he would have known beforehand as is the procedure. He claimed that nobody ever told him as to why he was transferred to the Grand Police army camp where there was no military activities.

He stated that the Grand Police army camp was a domesticated camp and was not like other army camps and as a soldier instead of having in their possession military equipment, they were handed domestic tools for domestic works which they had to do every day.

Mr Anacoura said that upon just returning from a one-year course in radio communication in Russia, he had to do domestic works for the whole of his nine months left on his contract. He alleged that two of his three brothers who were in the army suffered the same fate as him. He said that the army was involved in many duties from which many high ranking officers and other high ranking people in the country benefited and enriched themselves.

Though not willing to forgive, he claimed that he should be compensated for what had happened to him. Commenting further, he alleged that a lot of atrocities did happen to people who were brought in for interrogation at the Grand Police prison, where he was also stationed.

In setting out part of his complaint in open session in relation to a compensation claim following land acquisition by government at Bel Ombre, belonging to the Newlingward family, John Cruise-Wilkins, representing the family living in the United Kingdom, stated that the land was unlawfully acquired and the family was never compensated.

In a letter from the heirs, Mr Cruise-Wilkins read that the owner who died in September 2011, had received permission to build tourism and commercial establishments on the property by the Town Country planning in 1970. It further said that the Newlingward family through the father, in 1980, offered to sell the Wilkins family 3 acres of land which was finalised but was later quashed by the acquisition. The letter claimed that the Cruise-Wilkins family should also be compensated as they suffered a loss through the sale of their property on Praslin to buy the land from the Newlingward family.

Commenting on the part of his family, Mr Cruise-Wilkins, referring to a letter he wrote on behalf of his family to President Danny Faure on November 11, 2017, stated that the sale of prime property on Praslin, which was sub-divided and house a small hotel, businesses and a residential area, was carried out under court order which stipulated that the money from the sale was to be used to buy the 3 acres of land on Mahé. He wrote that today, the land sold on Praslin would be worth around R40 million.

Mr Cruise-Wilkins continued in his letter that the family only wanted to buy the land at Bel Ombre just to save the treasure site as his father had been involved in a treasure hunt in the area.

The letter claimed that in the process the family lost both the land on Praslin and on Mahé. It stated that government had acquired the land in Bel Ombre in February 1980 even though a promise of sale had been reached, thus this was against what was written in the French civil code that a promise of sale between two parties is equivalent to a sale.

Mr Cruise-Wilkins noted that former President Rene had promised his mother that the land would be returned to the family through her mother but she was only sold two thirds of an acre around the property inclusive of an old bungalow that they were living in.

He noted that in 1994, after the return of multi-party politics, the government, through former Minister Dolor Ernesta, rejected a claim for the rest of the 3 acres to be disposed to the heirs of Cruise-Wilkins, a decision he said was also upheld by the Court of Appeal in 1977. He further said that through this decision the family was not eligible for compensation for the land he claimed is now worth around R25 million.

Mr Cruise-Wilkins had also stated that he learned later that government won the case because the court had not followed the French law of the civil code. He claimed that in 2017 he was informed by somebody in the lands department that it had been waiting for the go-ahead from State House to proceed with negotiations while later he learned that the case was in the hands of the land tribunal. He claimed that both families are pressing for the return of the land to the Cruise-Wilkins family that both families would appreciate whatever mechanism used to settle the case to restore justice.

After he finished reading the content of his letter, Mr Cruise-Wilkins stated that the Newlingward family is in the process of receiving compensation from government while his family awaits theirs through the outcome of the case. He said that apart from the treasure site, the property in question now houses a residential area, playing field, multi-purpose court and a community centre. He claimed that part of the La Buse treasure site is sitting under some of these constructions which he noted he would talk more about it in a closed session which followed after. 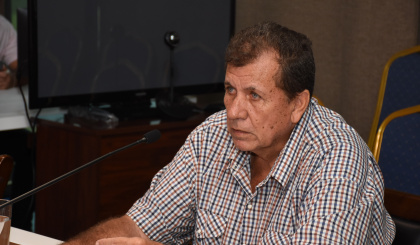 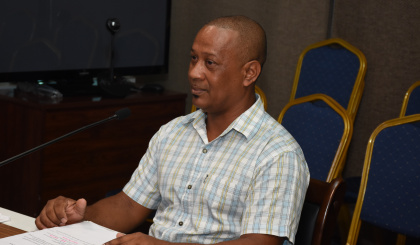