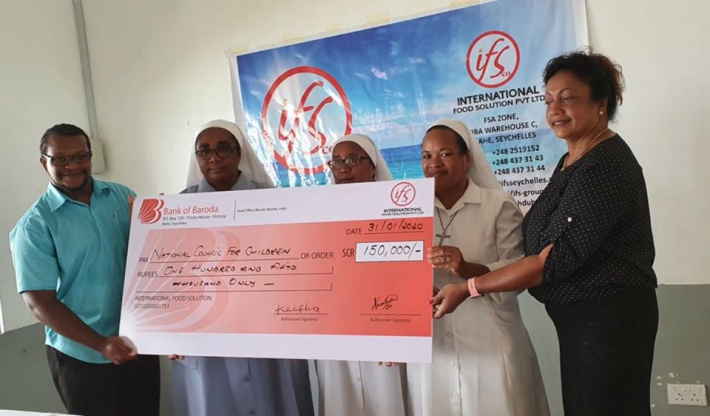 The cheque presentation at the President’s Village

With global connections in Dubai and India, Food Supplier company International Food Solution (IFS) based in Seychelles has once again donated through its Corporate Social Responsibility programme or CSR, several items of basic necessities to vulnerable groups in the community.

The donations of food and clothes have amounted to over R300,000.

The first donation held last week was a cheque for R150,000 which was presented to the National Council for Children (NCC) as the advocate of vulnerable children in the society.

In a short handover ceremony, consultant for IFS, Christine Françoise, stated that “the donation is in line with their company’s vision to make a difference in someone’s life by helping and supporting sustainable communities, as charity is at the heart of their business. Some of the money will go towards clothes and other basic amenities for the President’s Village, while a bigger portion will cover food expenses for the four orphanages in the country”.

As part of the donation, the President’s Village received a donation of R85,000 for clothing, food and other amenities.

All other orphanages under the patronage of the Catholic Diocese, which includes Foyer de la solitude, Foyer de la Providence and Foyer Ste Elizabeth received a voucher of R65,000 to purchase food items for the homes.

Later in the week, another ceremony was held at the Plaisance Home for the Elderly, this time with representatives of the Ministry of Health including the deputy chief executive of the Health Care Agency, Kathleen Cecile, in attendance.

The ceremony was again another handover of vouchers this time for over 600 tins of 2.5kg powdered milk amounting to R161,500.

“We are delighted that the company has thought of us since milk is something we use regularly for our patients and also for residents and staff,” said Mrs Cecile.

Both ceremonies ended with refreshments and snacks with the children and elderly of the two homes. 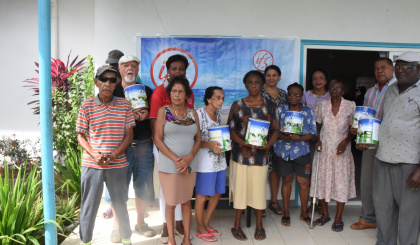 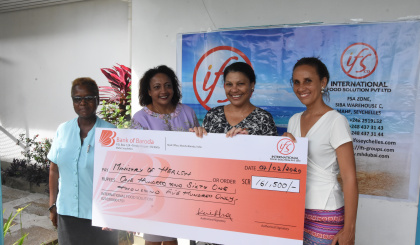 The cheque presentation at the Plaisance Home for the Elderly