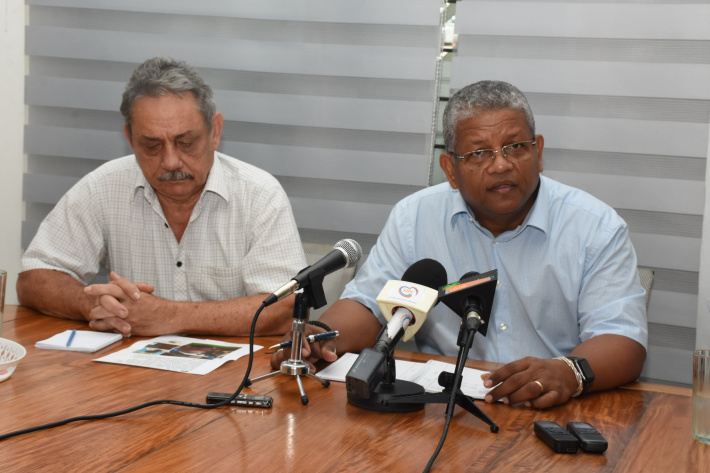 “What happened to me is not because they suspected me as a drug trafficker, but what happened was intended to humiliate me, harass me and to get a negative reaction,” leader of the opposition Wavel Ramkalawan said yesterday, regarding the incident with Anti-Narcotics Bureau (ANB) officers upon his arrival at the Seychelles International Airport on Saturday February 8.

Speaking to the media for the first time since the incident, Mr Ramkalawan, joined by LDS leader Roger Mancienne, produced a 3-minute CCTV video footage of the incident, stating that the search was “premeditated”, not conducted in accordance to the law and that the aim behind such an act was to humiliate him and tarnish his reputation, now that he has been announced as the presidential candidate in the upcoming presidential election, later this year.

“I have no issue with the police stopping me just as they stop every other individual, providing a reason why they are being stopped or searched and do their work properly. My problem comes when this is not carried out as per the law, as per the right procedure and in a manner which leaves a lot of space for wrong interpretations,” Mr Ramkalawan stated.

Mr Ramkalawan left the country for South Africa on Wednesday February 5 along with Honourable Egbert Aglae, the elected member for Port Glaud, where together with Genevieve Morel (private secretary to the Speaker of the National Assembly) they attended a three-day Southern African Development Community Parliamentary Forum (SADC PF) before returning to Seychelles on Saturday 8. He noted that upon arrival, they had no issue making it through immigration and through the Customs baggage check on the way out, before he was obstructed by the ANB officer who requested to search a particular bag while another requested his diplomatic passport, which was returned to him a few minutes after.

“We presented our forms to the Customs officer and after that, just as any other passenger, I was asked to place my hand luggage through the scanner which we all did. What I observed is that an ANB officer was standing right in front of me as if he is blocking my trolley. As he didn’t move, I asked “it seems you want to search me?” and he said “you know, we have to do our work, and yes I want to search you”. This was all amicable and at no moment was there any aggression by either parties and so he walked me to the table and he pointed to a specific bag. I put the bag up, unlocked it and he searched the bag which contained 3 bags of fish food, as I am someone who breeds fish, and it is cheaper in South Africa. As he was searching my bag, a second officer asked me for my passport, which as you know, I have a diplomatic passport. So he went away with my passport, I don’t know what exactly he did with it, but I assume, he photocopied the pages of my passport to find out where I travelled to. When he had searched the bag, I suggested that I also have a suitcase and asked whether he would like to search that too and he said no, he was not interested in searching the suitcase. All this time, my two colleagues were there and witnessed everything as well as the Customs officers, who also witnessed it, and then we left,” he explained, as he played the video footage.

According to Mr Ramkalawan, he thought nothing of the situation until Honourable Aglae pointed out that he was specifically targeted as he and Ms Morel did not have their luggage searched.

“Honourable Aglae said ‘what just happened is serious. They could have placed something in your luggage, and the way that the search was conducted, why only search you and not us? That means you are a target!’ which is when I realised I’m being branded as a drug trafficker and to further complicate things, as I got into the car and I was telling my driver about the incident, he said he was tipped off (at 8.30) that I would be searched upon arrival which seems to indicate that it is something that was discussed somewhere and I am suspected of being a drug trafficker. I want to tell all Seychellois that Wavel Ramkalawan is not a drug trafficker,” Mr Ramkalawan continued.

Mr Ramkalawan noted that the officer failed to inform him of any reason for the search, a breach of his Constitutional rights. Furthermore, he noted that if he was indeed suspected of drug trafficking, the Customs officers at the final baggage check would be the ones to alert ANB officers.

“Don’t forget, the week prior, on Facebook on the page ‘Nouvel Anba Langar’ (produces printout) an individual named ‘Kaka Sat’, of course a fake profile, made a comment reading “apre, sekirite airport, gete ki wavel I anmennen dan son bagaz’. Is it a mere coincidence?”

“Why was the search not genuine? If I am travelling with other individuals and there was really a suspicion that I am carrying drugs, would that not prompt a search of the other individuals I was travelling with? Why not search the second piece of luggage. I think this indicates clearly that the search was not to search for drugs, but the motive was to tarnish my image now that I have been confirmed as a presidential candidate and to give the public the impression that I am involved in drug trafficking,” he questioned, proposing the election campaign has already kicked off with dirty tricks.

A complaint has been lodged to the Commissioner of Police and the party is hopeful that they will reach a conclusion. He also seized the opportunity to put to rest rumours that have been circulating on social media platforms suggesting that he was verbally abusive to the ANB officers and that he was carrying contraband, specifically sex toys, among others.

Party leader Roger Mancienne noted that the incident was intended to derail Mr Ramkalawan’s presidential campaign. While he condemned the search and the way it was conducted, Mr Mancienne, however, acknowledged the challenge ANB and the police are faced with in the battle against drugs, and urged that officers try their utmost best to work as per the law and with all respect for individuals’ rights.

“We have requested that the police investigate the matter but we would also like to know the motive and who is responsible for the decision to search Mr Ramakalawan,” he concluded, noting that no dirty tactics should be employed as a means of influencing the electoral process. 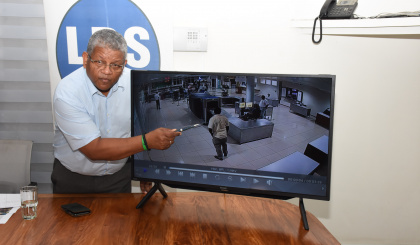