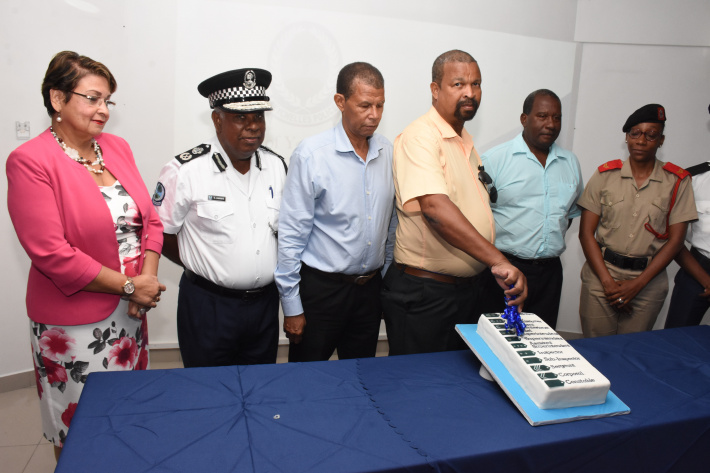 An overall decrease in all offences has been recorded by the police, with crime showing a decline of 8% during 2019 as compared to the year before.

This came to light during the Seychelles Police Force’s yearly crime statistics review held at the Ile Du Port Coast Guard base. The purpose of this overview was to determine the SPF performance with regards to its crime prevention and crime combating measures, its detective services performance and its training overview.

The event was graced by the presence of Designated Minister MacSuzy Mondon, Commissioner of Police Kishnan Labonte, principal secretary Sheryl Vengadasamy, deputy commissioners Romano Songor and Ted Barbe, among other members of the Police Force.

Commissioner Labonte acknowledged the efforts of the SPF in bringing down the figures but he noted “besides attending to the more serious offences, the police also spend a considerable amount of time attending to offences termed as common nuisances. These offences include but are not limited to acts such as swearing in public, high noise levels, begging, among others. We should not disregard these offences but place more emphasis on them and police them more diligently. This requires more police officers working at grass roots level, hence the increased visibility and subsequently a reduction in crime”.

Another issue the Commissioner of Police spoke strongly about is the ‘black spots’.

“We are all aware of the illegal activities taking place at these ‘black spots’ and as such more emphasis needs to be placed there with regard to policing these areas. Nowadays it appears that there are elements in society who have a blatant disregard for the law with regards to the commission of certain criminal acts. Regional commanders are urged to call upon members to take action against the offenders of these acts and to bring these offenders to court!”

Commissioner Labonte emphasised a lot on the way the SPF should work and adopt ‘a change in police methods’. He noted that in order to gain respect and in order to succeed in their two main objectives they have to ensure that policing in general is stabilised as well as to direct and redirect their policy methods in order to be able to cope with the ever changing face of criminality.

“In January 2019, we started positively and then remained stable in terms of the set monthly target for the duration of the year. September reflected the highest crime for the year (365 cases), but thereafter showed a steady decline until December, down to 302 cases. The lowest monthly crime was in January with 272 cases,” noted Chief Superintendent Sean Jacklin.

He also noted that it has become customary to see the reduction in crime during the month of December and this can be attributed to the annual Festive Season Operational Plan.

Theft was the highest contributor in the number of crimes recorded with 29% followed by burglaries and house breaking with 27%, offences against persons contributing 19% and arson and criminal damage at 10%.

1136 cases of theft were registered in 2019 compared to 1227 in 2018. “This was the highest categorised crime that contributed towards the reactive crime and opportunist crime continues to be a concern within this category and more needs to be done to educate the public, with regard to community crime prevention, on how to avoid becoming a victim of this crime and prevent creating easy opportunities for the criminals,” stressed Chief Superintendent Jacklin.

The total number of cases for 2019 was 749 compared to 784 in 2018. The comparative difference is 35 cases which reflect a decrease of 4% for 2019. It has been noted that both alcohol and drug related offences continue to contribute to this category of crime.

Chief Superintendent Jacklin noted that in general, all police stations performed well and the collective effort of all the policing components and supporting units ultimately resulted in the national objective of reducing crime, being achieved.

Also in general for 2019, 20069 cases were registered through police generated cases compared to 30619 in 2018. The intention for 2019 was to focus on quality rather that quantity and to focus on cases that would bring a positive effect on crime prevention and reduction, rather than accumulating high numbers that did not impact on crime prevention.

Other figures concern alcohol related cases (2229), speeding (339 cases) and 40506 vehicles and 3922 motor cycles were stopped and checked at various roadblocks throughout the year.

Most serious crimes investigated during 2019

During the presentations, Superintendent Justin Dogley gave an overview of the Detective Services Programme and noted that 45 people on the ‘Wanted’ list were arrested during 2019 and an average of 143 convictions were made per month.

One case still on remand at court; one case is still under investigation.

A further case of murder in 2019 was finalised in court and the suspect received a life sentence.

Armed robbery with firearm: One case reported and one suspect on remand at court, firearm recovered.

Deputy Commissioner Ted Barbe gave an overview of training that the members of the SPF benefitted during the year. There were in total 52 training sessions in 13 countries in 2019 attended by 102 SPF officers.

They also conducted 19 local training in maritime safety, intelligence, gender-based violence and financial crime. He also noted that there is ongoing training at the Seychelles Police Academy.

Other prominent officers such as the athletes within the force and the participants of the National Parade were rewarded during that ceremony.

Joshua Simeon, a former member of the SPF who passed away in 2019, was also remembered.

The ceremony ended with the traditional cutting of the cake.