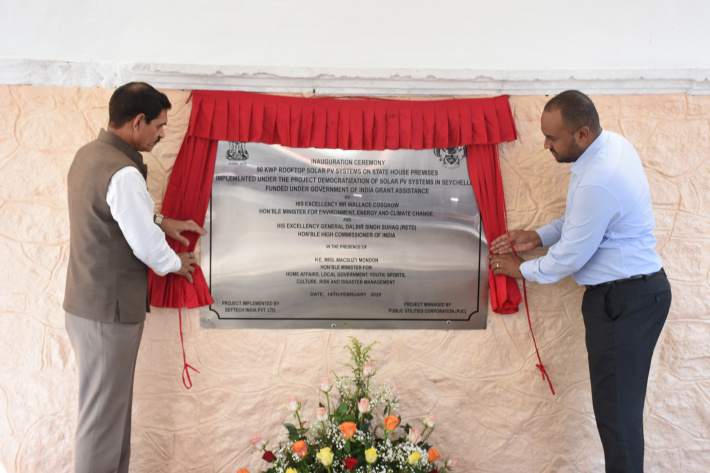 The electricity bill for State House is expected to reduce now that it is running on renewable energy.

Listed as a national heritage monument, State House and its surrounding buildings, housing the President’s and Vice-President’s offices among other offices, have been connected with the solar photovoltaic system via the roof top of the Victoria gymnasium.

279 solar panel units have been installed on the roof top of the gymnasium and they were commissioned by the Indian high commissioner to Seychelles, General Dalbir Singh Suhag and the Minister for Environment, Energy and Climate Change, Wallace Cosgrow, during a handover ceremony held in the car park of the Victoria Gymnasium yesterday morning.

The intake position for the invertors, meters and other components are located inside the gymnasium.

Present were the secretary of state for cabinet affairs, Mohammed Afif; the principal secretary for administration in the Office of the President, Yvonia Richardson; the principal secretary in the Office of the Vice-President, Rebecca Loustau-Lalanne; the chief executive of the Public Utilities Corporation (PUC), Philippe Morin; the chief executive of the National Sports Council, Jean Larue; and other guests.

The 90kw solar photovoltaic system for State House has been funded by the Indian government under a grant assistance of USD 3.44 million for solar projects in Seychelles.

The panels have been installed by SEFTECH, an Indian based company and PUC. This is the fourth inauguration ceremony of roof top solar PV installations on government buildings under the Indian grant after the National Assembly, the Ministry of Health and the Barbarons transit homes.

A 1 megawatt PV installation will soon be inaugurated on Ile de Romainville to support over 500 homes on social assistance.

The Supreme Court, which is also part of the component of a much larger project to install a 2 megawatt solar photovoltaic on selected government buildings, including the over 500 homes, awaits its installation via newly built establishments as the actual building is not conducive for installation of the panels.

In his speech for the occasion, High Commissioner Suhag said that his government, following in the footsteps of Mahatma Gandhi, has pioneered many initiatives for fighting climate change including the International Solar Alliance (ISA), where 75 countries have already ratified their cooperation with Seychelles as one of the founding members who will be availing solar implementation to the extent of USD 8.7 million under this development partnership arrangement directly from the people of India.

“This would cover rooftop solar installations on various government buildings, housing units and even solar streets lighting in various locations on Mahé, Praslin and La Digue. This is the level of commitment and importance that the world’s largest democracy shares with its friends like, Seychelles,” he said, noting that the inaugurated solar panel units for State House can collectively generate 33,650 units of power over a period of one year thus contributing to a substantial amount in power cost reduction apart from the positive effects of pollution-free power generation across all of State House premises.

In response, Minister Cosgrow thanked the Indian government, through High Commissioner Suhag, for its humble donation while we also extend our sincere appreciation and gratitude.

Minister Cosgrow noted that while the government commits to tackling the cost of utilities to households and cost of living in general in the short term, the direct benefit of this project includes increased savings on the utility bills of the institutions which have been connected.

“On the other hand, in the longer term as part of our commitments towards climate change mitigation, Seychelles like other small island developing states have developed ambitious climate action plans also known as Nationally Determined Contributions or NDCs. A large component of our NDC centres on the transition from a fossil fuel powered society to one which is powered by clean and renewable sources of energy,” he said, noting that the government’s target is to generate 100% of our electricity from renewable sources by the year 2050.

“We are happy to confirm that India is a solid partner, helping us to achieve this long term objective,” Minister Cosgrow said.

Minister Cosgrow later clarified that the Victoria Gymnasium will not benefit from the PV system though it is housing the panels. He said that as they did not want to distort State House, as a national heritage, with the panels they opted to use the rooftop of the gym that had just been renovated for the project. He claimed that the gym forms part of buildings surrounding the State House premises. 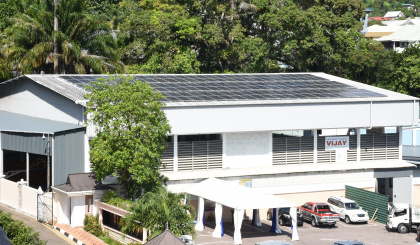 The solar panels on top of the Victoria Gymnasium (Photo: Patrick Joubert)