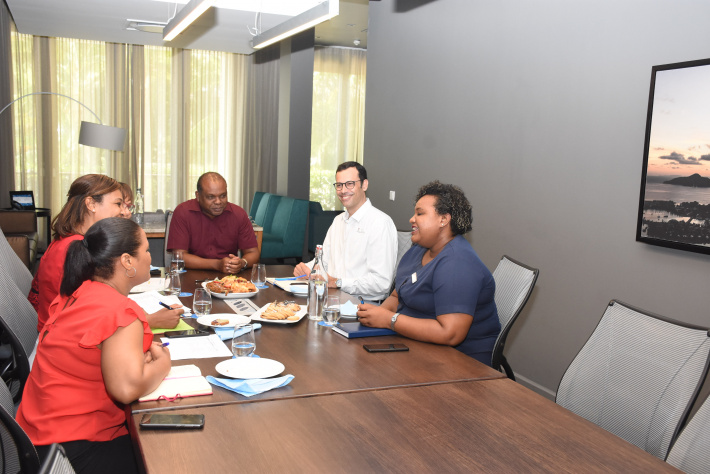 Minister Dogley during his meeting with Shannon College graduate Rebecca Port-Louis, who is currently sales and conference manager at the Eden Bleu hotel (Photo: Louis Toussaint)

The Minister for Tourism, Civil Aviation, Ports and Marine Didier Dogley on Friday led a small delegation to visit some Shannon College hospitality management graduates at their workplaces.

The aim of the visit, which started last year after it was decided by the mentors committee, is to create a better communication channel between the Shannon College graduates and the ministry.

Prior to Friday’s visits, other visits conducted by the minister were to graduates working in hotels in the west and south of Mahé.

Started over 10 years ago, the Shannon College programme includes a formative advanced diploma at the Seychelles Tourism Academy (STA) followed by a bachelor’s degree course in hospitality management at Shannon College in Ireland for those who perform well in their diploma.

Shannon College has produced over 80 Seychellois hospitality management graduates and another 12 graduates are expected to come back from Ireland in mid-2020.

At present there are only two graduates that hold the post of general manager but others are working in various, lower managerial posts as well.

Minister Dogley noted that his ministry commits itself to monitoring the progress of the graduates to ensure they are treated fairly and are given the opportunity to hold managerial posts, when these are made available.

“When they come back from Shannon, we do not just let them go; the ministry monitors them so as to ensure they are treated well and offered managerial posts, when they are made available,” Minister Dogley stated.

“At the start of the programme, many of the initial graduates were not staying in the tourism industry, but the recent graduates have proven themselves to be passionate about hospitality and want to remain in the industry. We should encourage this,” he added.

The ministerial delegation, which included principal secretary for tourism Anne Lafortune and director for tourism human resource development Diana Quatre, started off their visit at the Eden Bleu Hotel where they met Rebecca Port Louis, a graduate from first Shannon College cohort in 2013.

She is currently the sales and conference manager at Eden Bleu, and the management team at the hotel has been instrumental in her progression since they have what the ministry considers as a good localisation plan.

To date, Eden Bleu only has two non-Seychellois managers and the department of tourism is extremely happy with this feat.

Afterwards the delegation went to H Resort in Beau Vallon to meet with Deanna Ah-Kin, who graduated in the fifth cohort in 2018.

Deanna is currently working in the front office department at supervisor level.

The delegation’s third visit was at Le Meridien Fisherman’s Cove, Beau Vallon where they met Judith Vital, a graduate from the fourth cohort in 2016.

She is working as the guest relations supervisor.

The last stop was at Savoy Resort and Spa, also in Beau Vallon, where the delegation met Chloe Samy who graduated last year and who is employed as the assistant front office manager.

One of the challenges identified in some of these hotels was the fact that there are no clear succession and localisation plans for some of these graduates.

For some of them, they felt that the foreigners in the same position as them were getting better remunerations or chosen for promotions over them when they were not necessarily better at doing their job.

The Ministry of Tourism will enter into discussion with the ministry of employment to try and address these issues.

The next visit to Shannon College graduates will take place on February 27 at Six Senses, Zil Pasyon (Felicite Island) and Raffles (Praslin).