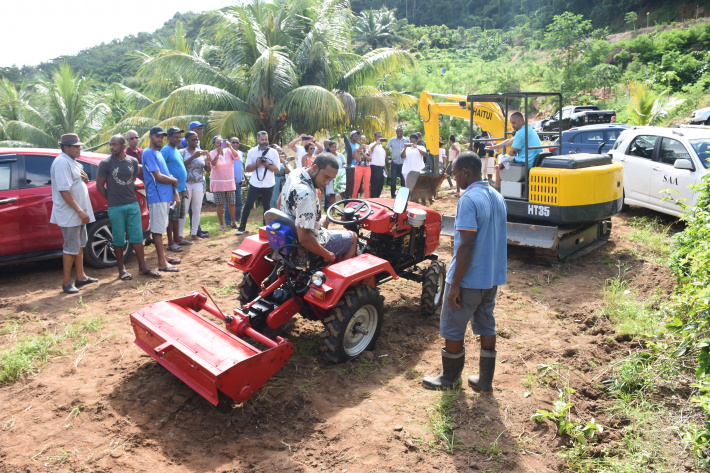 Demonstrating the use of the new equipment (Photo: Patrick Joubert)

Farmers registered with the Local Food Producers Association (LFPA), based at Anse à la Mouche, will benefit from the free services of an excavator and a tractor for their farming activities now that the association has acquired the two ground breaking machines.

The two earth breaking machines were funded by UNDP under the GEF small grant programme. They were handed over by the UNDP national coordinator, Lyndy Bastienne, to the chairman of the association, Nelson Renaud, and vice- chairman Sandville Desaubin, in a small ceremony held recently at the Anse à la Mouche Farm, situated up on the hillside of this sub-district of Baie Lazare.

Present were the principal secretary for Youth and Sports, Fabien Palmyre; the member of the National Assembly for Bel Air Norbert Loizeau; the chief executive of the Seychelles Agricultural Agency (SAA) Linetta Estico; the chief executive of the Property Management Company, Evelina Antha; the district administrator for Baie Lazare, Linette Dodin; members of the association and other members from other farmers’ associations, among other guests.

The association have been granted $30,000 to purchase the two ground breaking machines, which was part of a $42,000 grant that the association signed locally in May 2019 with UNDP overseas representatives under its project ‘Nurturing a climate smart agricultural system on a hill-side farmland to increase affordable local food production on Mahé Island’.

In a small address, Mr Renaud said that among the aims of the association, which was established in October 2017, was to in the first place acquire good excavating machines to develop new farmland to maximise local food production on hill slopes while considering also the protection of the environment.

He further said that the two pieces of equipment will help boost local food production among its members while they will also try to provide consumers with organic products.

He thanked the UNDP and all those who helped one way or another in getting the association to acquire the excavator and the tractor which were also exempted from tax.

Mrs Bastienne congratulated the Local Food Producers Association on its two new acquisitions though she claimed that UNDP does not normally fund for such machinery equipment under the GEF grant programme.

She said she hopes to see more affordable farm produce on the market.

On her part Mrs Estico, who also congratulated LFPA, said that SAA is committed to continuing to work with farmers to ensure an increase in local food production.

Mr Renaud later said that the excavator and tractor will be rented for free among its members, while they will cater only for the fuel. After one year into the project, the equipment will be rented out, at a reasonable price, to other farmers in other associations.

He also said that the association is looking into studying and implementing a marketing strategy and it will also discuss with the authority the setting up of markets around the country for farmers to best serve the community. 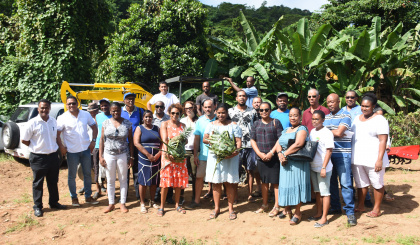