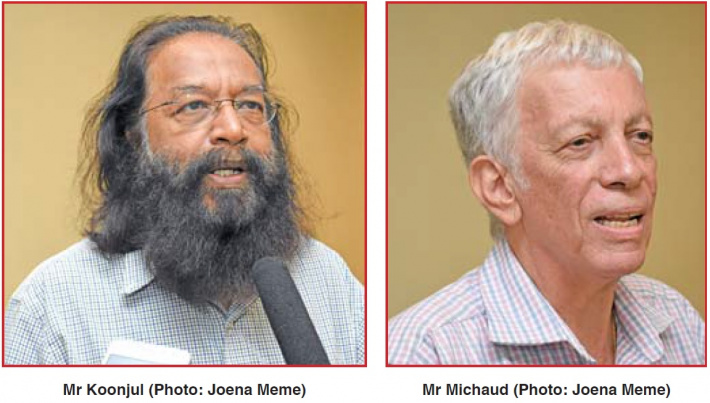 The Seychelles-Mauritius Joint Commission of the Extended Continental Shelf for the Joint Management Area (JMA) and the Technical Committee of the Joint Commission have since Monday congregated at Savoy Resort and Spa, Beau Vallon, for the first of four meetings to discuss and deliberate on the surveillance, monitoring, and patrol of the JMA and the potential for new research after successful scientific expeditions in 2018 and 2019.

This year the Joint Commission will be having its 20th meeting and the Technical Committee of the Joint Commission its 25th meeting in which discussions are focused on the management of the JMA. The meetings have been held four times annually since 2012 when both parties signed two treaties to exercise their sovereign rights over the seabed and subsoil of the Mascarene Plateau.

During the Technical Meeting held on Monday, special adviser in the Office of the Vice-President for the Department of Blue Economy, Philippe Michaud, noted the numerous milestones since March 2012 when the bilateral treaties concerning the plateau were concluded, providing an equitable and operative legal basis for the two states to exercise their sovereign rights and jurisdiction over the continental shelf.

“The EAF-Nansen Programme scientific research cruise carried out in 2018 and the one done by the University of Hamburg last year added to our knowledge of that vast zone. It also provided valuable hands-on practical scientific experience to some of our scientists. More research work is expected to follow,” he noted.

“The international community has recognised that the JMA is one of the first ‘transboundary’ management agreements for an Extended Continental Shelf (ECS) and represents a unique joint management demonstration. This is particularly valuable in view of the expected number of ECS applications and subsequent approvals, which will then require the development of equally innovative management approaches. The UNDP/GEF Joint Management Area Demonstration Project, which already started since 2018, has come at an opportune moment. This is the opportunity for our countries to build on solid foundations so as to maximise the benefits that we can derive from this huge zone,” Mr Michaud stated.

He went on to talk about the natural resources noting that it will have to be managed in a sustainable and consistent manner so as to protect the marine environment and biological diversity of the Continental Shelf, an area of about 396,000 km2.

“We know that there are activities taking place there in this zone and it is our responsibility to ensure that our common resources are not being illegally exploited. We must also be watchful that other unlawful activities such as waste dumping and marine pollution not are happening,” he said.

“Our governments must invest in human capacity. This includes a wide range of disciplines such as marine biology, geology, oceanography, information technology, international law etc. These are exciting and challenging times. Just to focus on international law there are complications of managing a ‘Sovereign’ seabed underlying a water Column that is a ‘high seas’ commons. We need to develop more local capacity,” Mr Michaud added.

In concluding his address, Mr Michaud noted that Seychelles is in the process of domesticating legislation for the JMA, a process which has been long and slow, “partly because of national capacity issues but also because this is very much new territory with no existing precedents to fall back on”.

“We have a very close collaboration between our two states. Of course, there are sometimes some disagreements but through discussions, we are able to come to a conclusion that is beneficial to both parties. For us, it is not a matter of negotiating but rather to make decisions in the interest of both countries,” Mr Koonjul stated.

The Joint Commission will today be chaired and co-chaired by principal secretary of the department of Blue Economy for Seychelles Kenneth Racombo, and N.K. Ballah, G.O.S.K, secretary to cabinet and head of the civil service, Prime Minister’s Office, from Mauritius. There will be ample deliberations with approval of all the technical issues put forward by the Technical Committee. 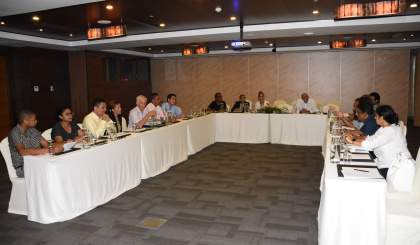 The Seychelles and Mauritius delegations during the meeting yesterday (Photo: Joena Meme)