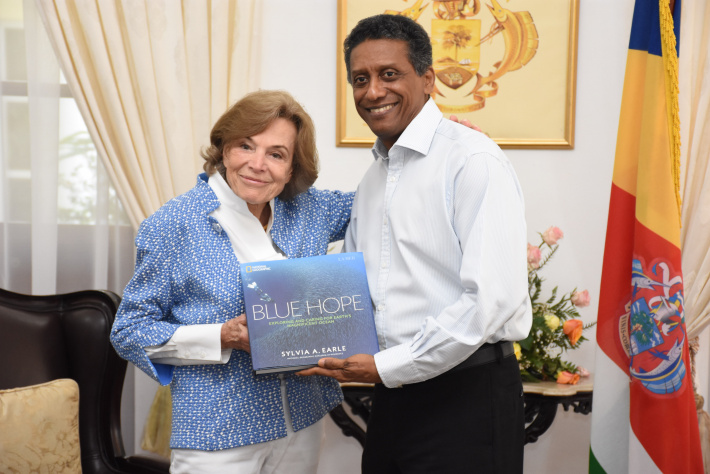 Seychelles praised for its leadership in preserving the ocean

World-famous ocean explorer and marine biologist Dr Sylvia Earle has applauded Seychelles and its leadership in preserving the ocean and the environment, adding that these are actions that other nations should emulate.

Dr Earle said this yesterday after she was officially received by President Danny Faure at State House.

Dr Earle and her team are in Seychelles to film a documentary programme for the BBC, focusing on countries and individuals working towards the sustainable protection of the ocean.

President Faure has been participating in the BBC programme which will feature Seychelles in its end segment.

It will be broadcast after Seychelles has announced its achievement of protecting 30% of its 1.37 million square kilometre exclusive economic zone (EEZ) and territorial sea.

As an ocean activist, Dr Earle applauded Seychelles and its leadership in preserving the ocean and the environment, adding that these are actions that other nations should emulate.

The American explorer’s first trip to Seychelles was in 1964 and has experienced the joys of diving in our waters, including around Aldabra.

Dr Earle stated that her interactions with President Faure has displayed a man who is willing to work in strides, such as go into a small submarine in a plea to other countries or support the Aldabra clean ups, and take up leadership in regards to climate change.

“The meetings which I have had with President Danny Faure showed the willingness to do what every leader should do: look at the evidence and listen to scientists as well as the voices of the people and fishermen.”

“This nation should be celebrated for moving strongly in the right direction. I will personally commit to doing anything I can to help,” Dr Earle stated.

“For some, the blue economy means to extract more from the ocean but the wise way to look at the blue economy is how we work sustainably within the natural ocean systems. We cannot continue to just take.”

“Now there is this global movement to protect at least 30% of the ocean by 2030 which is only 10 years away but here in the Seychelles you are already there, with actions that by this year 30% has been achieved. That is real leadership and other nations should listen up,” Dr Earle pointed out.

She noted that the issue of climate change should very much be seen as a life or death situation for the planet and its inhabitants.

Even as she praised Seychelles for its achievements in protecting its environment, Dr Earle observed that Seychelles can do more and “be more proactive” towards restricting the amount of fish taken from its waters.

“What concerns me is the large scale industrial fishing for tuna, sharks, for life in the oceans; it is not sustainable. Large scale taking in huge nets, there is no excess in nature and we have taken so much that there is real concern that some of the species that are now on the market might be gone, we can exterminate these animals by doing what we are doing right now.”

Although having safe havens or protected areas are steps in the right direction, more can be done to become more respectful of the limits.

“We have this illusion about it [fisheries industry] being a strong economic driver but it is subsidised by the European Union, by foreign countries who come to the Seychelles to extract from your country, from your blue economy and does not benefit the country as it should,” she concluded.