The championships, which will feature some of the continent’s top talent, start today at the University of Botswana’s 50m swimming pool with the heats beginning at 9am (11am Seychelles time), while the finals will take place from 2pm (4pm Seychelles time) daily.

It is not clear how many swimmers make up the Seychelles team as all efforts by Sports NATION to get a copy of the delegation list has been in vain. In fact, Sports NATION has been trying to get hold of the list since Wednesday February 12, 2020 and was told by Seychelles Swimming Association (SSA) secretary Maureen Payet the same day that two press releases with all the details will be issued on Wednesday February 12 and Monday February 17, but this newspaper has not received any, if they were really issued.

All attempts to reach Mrs Payet on the phone have been in vain.

Despite the SSA not being forthcoming with information about the trip, Sports NATION can confirm that Alexander Payet, Lilianna Mason, Tejasvi Kerai are part of the Seychelles team. The three swimmers train with the Mahé Skimmers club who broke the news to us that they had met the qualifying times.

Payet will compete in the boys’ 12 years old and under category and will swim the 50m, 100m and 200m freestyle, 50m backstroke, 50m breaststroke and 50m butterfly,.

Meanwhile, in a new development, the SSA has posted photos of some of the swimmers accompanied by a young South African coach, Doyle Finch during training sessions and team talks.

Sources close to the swimming fraternity have confirmed that Doyle Finch, son of South African coach Cedric Finch, had been tipped to work as swimming coach in Seychelles but things took a different turn when news leaked and the National Sports Council (NSC) interfered and decided that a vacancy should be run in local newspapers.

In fact the vacancy which closes tomorrow had been advertised twice as the NSC was not happy that the SSA had taken upon itself to draft the original advertisement which did not contain details about the position being advertised.

NSC chief executive Jean Larue confirmed to Sports NATION that they interfered and requested that the position be advertised again and he also confirmed that the local sports governing body is not aware that the SSA is working with coach Doyle Finch.

“The NSC only knows that Vanessa Narty is the coach accompanying the delegation. We have no knowledge of any other coach working with the SSA and we have not paid for his airfares and lodgings,” CEO Larue told Sports NATION.

So who is paying for coach Flinch’s airfares, lodgings and service?

Mr Larue added that they have also received reports that the advertisement being run in the newspaper is just a cover-up because NSC has already hired a foreign coach.

“This is not true and I call on all local coaches to apply for the post and the best candidate will be chosen for the job,” explained CEO Larue. 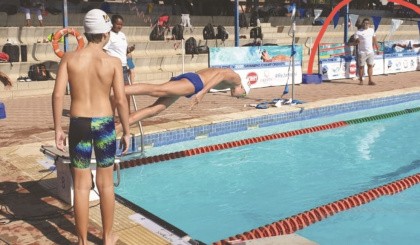