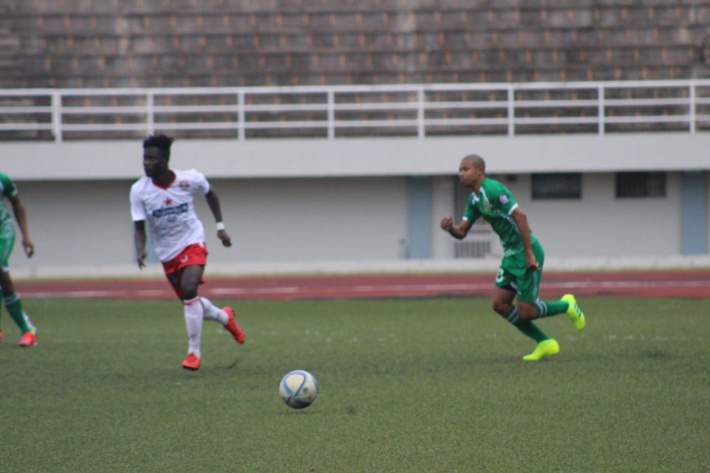 Foresters bounce back in style against Au Cap

Mont Fleuri-based Foresters bounced back with an 8-1 victory over bottom club Au Cap on Wednesday afternoon in a SeyPearl Premier League encounter at Stad Linite.

Foresters had to bounce back after their first league loss to LightStars last weekend and they almost made a dream start 30 seconds into the match when Au Cap’s Tian Payet cleared Nigerian Kazeem Adeyeri’s long ball as far as Ryan Henriette but the Foresters speedy striker could not hook the ball over goalkeper Christopher Legaie.

The players of coach Harold Hoareau went ahead in the 8th minute from Laurence Leon’s cross which was headed onto the post by Francis Nourrice and the rebound fell to Adeyeri whose shot was deflected to Ryan Henriette who was upended by Thierry Camille for a penalty awarded by referee Kerens Yocette.

Malagasy Jean Tigana stepped up for the spot kick and he easily sent goalkeeper Legaie the wrong way to make it 1-0 for the Mont Fleuri-based team.

In the 12th minute, Foresters extended their lead from a brilliant run by defender Colyn Francourt from his own half and he sent in an inch-perfect cross to Nourrice who was unmarked at the back post and he headed home for a 2-0.

Six minutes later, Nourrice bagged his brace as Martin Williams linked up with Tigana whose teasing cross was headed home to make it 3-0.

In the 33rd minute, Foresters won a second penalty when Adeyeri’s free kick was handled by Jean Yves Joseph and Tigana again took responsibility of the penalty and he coolly slotted the ball past goalkeeper Legaie for a 4-0 score at half-time.

Foresters brought on Leroy Corallie and Rino Pauline for Brian Dorby and Henriette in the second half and they stretched their lead in the 54th minute after defender Carlos Andre pulled back Pauline and was lucky not to be booked and Francourt took the resulting free kick and he rifled it over a stranded goalkeeper Legaie to make it 5-0.

Two minutes later, Au Cap should have reduced the arrears from a poor clearance by Foresters defender Leon and the ball fell to Wallus Mondon but his dipping shot sailed agonisingly over the crossbar before the bottom club replaced goalkeeper Legaie and sent on Jude Barra.

However, Foresters did manage to score again in the 63rd minute from a superb through ball from man-of-the-match Tigana to Corallie who kept his cool to plant the ball into the far corner for a 6-0 advantage.

Corallie grabbed his brace in the 80th minute when he reacted quickly to Adeyeri’s throw-in and he steered the ball into the net to make it 7-0.

Three minutes later, it was 8-0 which resulted from Adeyeri’s short corner to substitute Dwain Williams who lofted the ball into the penalty area and Nourrice failed to control but Martin Williams pounced on the loose ball and unleashed a beautiful shot on the turn which crashed into the roof of the net for the pick of the bunch.

Au Cap managed to score a consolation goal in the 88th minute from Jean-Yves Joseph’s free kick which Foresters captain, Malagasy Leonard Besabotsy failed to clear and Joseph latched onto the stray clearance and he floated the ball to the far post where Wallus Mondon headed past goalkeeper Kitson Cecile for a final 8-1 result which helped Foresters reduce the gap at the top on league leaders St Michel to four points and coach Hoareau, who was not happy that they conceded late in the match, was pleased they had returned to winning ways in a match where he felt they could have won by a wider margin.

“We should have scored more goals with the number of chances we created and we slackened in the dying minutes to concede but overall it was vital to win on a high score to boost the morale of the players after our surprise defeat last week and to motivate the players for our away match in the cup on Saturday on La Digue,” Foresters coach Hoareau told Sports NATION.