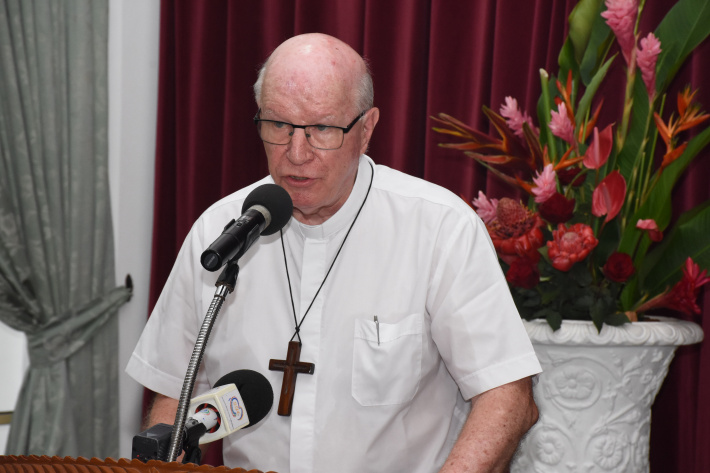 The Seychelles Interfaith Council (Sifco) organised a conference yesterday focusing on the moral and spiritual dimensions of the Truth, Reconciliation and National Unity Commission (TRNUC) process to bring about national unity.

The half-day conference held at the National Bahá’í Centre at Roch Lane was attended by Vice-President Vincent Meriton, the leader of the opposition Wavel Ramkalawan, the members of the TRNUC, members of Sifco and of different denominations.

The event was a first of its kind and it was attended by more than 80 people coming from different strata of society. It has been six months since the TRNUC is in operation and the ultimate aim of the commission is to reconcile the people of Seychelles and reconciliation requires acceptance of notions of forgiveness and responsibility, notions that are central to many faiths.

The chairperson of Sifco, Bishop Denis Wiehe, set out the tone by stressing on the role of TRNUC in trying to bring unity in the country.

“As the TRNUC’s work progresses, we have become more and more aware of its importance for the future of our country. If the first part of the work of the commission has dealt more with the truth concerning the past and what happened during and just after the coup d’état, reconciliation and national unity is a building up of our society for today and tomorrow. And much depends on the commitment of each and every one of us. It is of vital importance for the future of Seychelles that we found our society on ‘a spirit of mutual respect and reconciliation’ not only in regards to the exercise of leadership and responsibility but in all circumstances of our life, in our personal and family life as well as the more public aspects of our living together. I would like to dwell for a moment on this ‘spirit of respect and reconciliation’, no matter what wrongs or abuses we may have to face in our lives.”

He also noted that “sentiments of hatred and revenge will not relieve our fear and pain. We must learn to sorrow for the wounds of the past and be reconciled. As we learn to sorrow we find ourselves united with all sorrowing persons, even our enemies. This is the ideal that Sifco would like to bring to the great work undertaken by the leaders of our society when they instituted the TRNUC. We – Sifco – pledge our commitment to work with the commission and with all persons of good will. We sincerely hope that today’s conference will bring the TRNUC and our society at large the support and new ideas which we need as we move forward together in greater harmony and understanding to build our future.”

The chairperson of TRNUC, Gabrielle McIntyre, gave a review and findings of the TRNUC to date. “The commission’s formal commencement of mandate was on August 9, 2019 and on September 9, 2019 the commission held its first session of public hearings at National House. Since those first hearings the commission has held hearings for two weeks of each month, except for the month of December, and is currently hearing over 108 cases simultaneously and has heard the evidence of over 210 witnesses.”

Ms McIntyre also explained that the range of complaints made before the commission covers the full ambit of human rights violations set out in its Act including unlawful killing, rape, torture and enforced disappearance, unlawful detention, forced exile, denial of the right to employment and unjustified acquisition of property. All of the complaints brought require the Commission to undertake investigative steps to corroborate allegations made, identify suspects and to ensure the protection of the due process rights of all. In carrying out these functions the commission is supported by a small team of five investigators. The work load is extremely onerous.”

Despite challenges the commission is making some progress. It has opened lines of communications with accused persons and is starting to build relationships with some of them aimed at demonstrating that its objectives are not to penalise, but to find the truth so as to bring the families closure and also to facilitate a broader understanding of the context in which such violations were committed to ensure they do not recur.

Ms McIntyre also noted that since the beginning of TRNUC, they have received the support of President Danny Faure.

The delegates attending the conference appreciated the fact that Sifco came up with this conference and gave various suggestions to the TRNUC for helping the population to better understand their work.

VP Meriton noted that “About two years ago we had a national conference/ debate at the ICCS about setting up this commission and I was given the task to launch it. Seychelles is in a unique situation as the party when the coup happened is still in power and we are too small and we are too sacred to go at each other’s throat. There are some truths that we all know, see and live! It is not a secret that Seychelles has been leading in all areas of development. But there are darker truths that we are not proud of, that we need to look at and face in order to move forward. Seychelles want to move forward and find closure and that is what we all agree on. I need to say it today that President Faure has given no directive to any military official or government official who is coming out to tell the truth. President Faure has given directives to give support to the commission. We are cooperating fully and we want the matter to be disposed of. The final report will be submitted in 2022 where decisions can be taken after. This commission is for Seychelles and it is not about political gains, it is about reconciling about our past and moving forward in order to build on the good work that has been started. We need forgiveness and we need the perpetrators to show genuine remorse and the truth will set us free.”

Mr Ramkalawan also took the opportunity to address the delegates. He talked about the start of the process and pointed out that “in order for the truth to come out, perpetrators in the first place need to feel comfortable, to come forward to acknowledge their acts. From there, the families will grasp the circumstances of whatever happen and be able to move on. The mechanism is there for the perpetrators to come forward. We cannot just forgive without knowing who hurt the families. I admire the work of the commission and the executive has a very important role to make clear statements to say to the people, to say to the army if you were part of it go give the testimony. It is a tough process but I think some amendments should be done so that people can get access to funds to pursue their medical treatment as three years might be too late”.

Many suggestions were put forward and Sifco gave a perspective of different religious faiths on reconciliation and forgiveness.

Bishop French Chang-Him also had the opportunity to share his story as a victim. 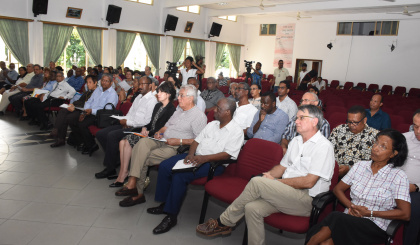