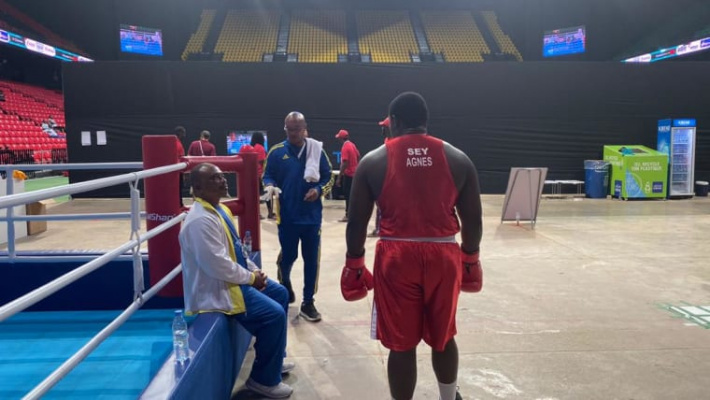 Keddy Agnes making his way to the ring

After winning his first fight, Keddy Agnes is to step into the ring again tomorrow to fight for a place in the semifinal of the +91kg category of the African boxing qualifying event for the Tokyo 2020 Olympic Games.

On Saturday at the Dakar Arena in Dakar, Senegal, hard hitter Agnes won his preliminary round fight on points (5-0) against Cabo Verde boxer Davilson Dos Santos Morais who competed at the 2016 Summer Olympics in the men's super-heavyweight event, in which he was eliminated in the round of 16 by Joe Joyce, the eventual silver medallist.

According to the reports, Agnes proved too busy for Davilson Morais in a bout short on highlights, but in the end the shorter Agnes generally had the final answer to most exchanges to win it on all the judges' cards.

Fighting to qualify for a first appearance at the Olympic Games, Sportsman of the Year 2018 Agnes is to fight in the quarterfinal stage against number three ranked Tshikeva Kimbembi of Ivory Coast who won a bye.

Agnes is being accompanied by coach Gerry Legras.

There are 33 places at the Tokyo Olympics available in Dakar – 22 for men and 11 for women.

Any boxer who reaches the final is guaranteed an Olympic place.

In addition, in six male weight categories (flyweight to light-heavyweight) as well as one female division (flyweight) there will be a third qualification spot available. This will be decided by a box-off between the two losing semifinalists.

There will be one more chance to qualify for Tokyo 2020 at the final world qualifying event in Paris in May.

A fifth and last competition, the final world qualifying event, will be held in Paris, France, from May 13-20.

There will be 278 Olympic quota places up for grabs at the qualifiers, and an additional 8 quota places will be assigned by the tripartite commission.