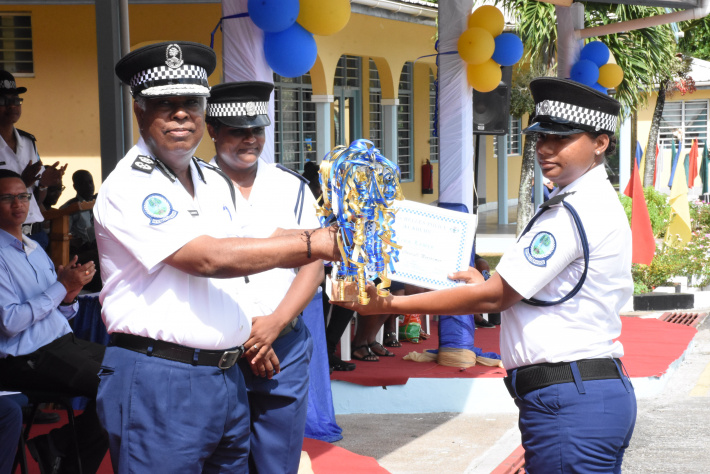 A new batch of 24 officers who have successfully completed their programme at the police academy have received their certificates.

The graduation ceremony was held yesterday at the Seychelles Police Academy at Pointe Larue in the presence of Commissioner of Police Kishnan Labonte and commandant of the academy Superintendent Robert Bibi.

Others included high ranking officials of the force, police officers, staff of the academy and parents.

The new officers had followed the young police leaders programme to complete an eight-month course.

Awards were also presented to officers from the group who had excelled in their fields.

The most disciplined officer in the group was Jean Paul Marie.

Speaking at the event, the Commissioner Labonte said the new police recruits should be proud of their achievements which qualify them as one of those with capacity to lead in the force on its path towards future progress.

“A graduation of this nature comes only once in the life of a police officer’s career thus the importance and significance of today’s event,” added the commissioner.

He noted that the course was no doubt rigorous and gruelling and they have now come to the end of that phase. However he noted that even though the course have come to an end, it does not mean they are done learning.

“Resilience in the face of challenges, knowledge and obedience of lawful orders are some of the key elements that you need to take with you through your journey as you follow your calling on the noble quest,” he said.

“We are determined to see the creation of a modern police force with emphasis on loyalty, professionalism, trust and good conduct in our police officers. Behaviour such as laissez-faire attitude, misconduct, indiscipline and corruption will not be tolerated.”

The commissioner also called on senior officers of the force to lead by example and to be good role models for the junior ranks.

He ended by saying that being a police officer is much more than just a job, it is a calling. A calling to serve one’s community and country to the best of one’s ability.

The ceremony also featured a testimony from Lina Lawen who thanked the people who had helped them into becoming the officers they are now.

Ms Lawen also gave the attendees an overview of a typical day at the academy.

Speaking to the press following the ceremony Ms Lawen, who also won Best Overall, noted that she just wants to do her job well and make every sweat counts through hard work and determination to be one of the best.

On his part, Mr Bibi spoke about the restructuring programme that the force has embarked on to modernise its methods and educate its personnel on management and other trainings.

He noted that they have identified universities in India, South Africa and Mauritius.

“We need quality officers and in the future we will be able to accomplish that through the extensive training that we will be giving our officers,” said Supt. Bibi. 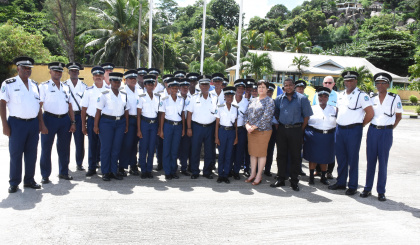 The graduates in a souvenir photograph with guests (Photo: Louis Toussaint)