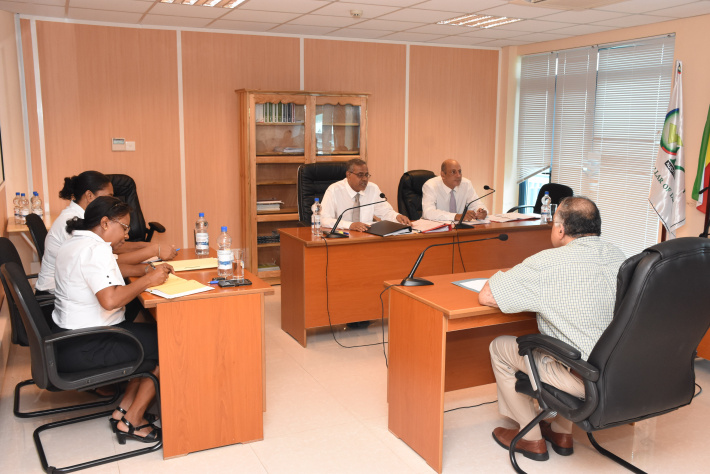 Appointed by President Danny Faure in July 2018, the commission has seen a delay of several months in concluding its inquiries into the Compagnie Seychelloise de Promotion Hôtelière (COSPROH).

Consequently, the commission’s term was recently extended until June 2020 after which it expects to submit its report to the president.

The delay was partly caused by the fact that one of the members appointed to the commission, Francis Collie, has been absent since he is not residing in Seychelles.

The commission will now continue on with its work with the remaining two members who are its chairman and the Auditor General, Gamini Herath, and the deputy Attorney General David Esparon.

So far, the commission of inquiry has listened to the testimonies of just over 16 people who have been linked to the company.

Nonetheless, Mr Herath remarked that the commission is dissatisfied with the number of people who have come forward to help shed light on the matter, even though the commission has sent out public notices in various media outlets inviting people to come forward.

“Personally, I am not satisfied with the number of responses we have received. Although some are called to appear before the commission, they choose to wait until we send out summons which the commission prefers not to. We want people to come voluntarily and provide information voluntarily,” Mr Herath stated.

He took the opportunity to urge anyone who holds information in regards to this case to come forward and help the commission bring clarity to and establish the facts surrounding the COSPROH matter.

Mr Herath added that the COSPROH case is one which is very difficult to investigate because the information relating to the state-owned company was not readily available and hence the commission had to start from scratch.

Due to this lack of information, the commission of inquiry along with the staff in the Office of the Auditor General had to undertake extensive research.

“There was no information regarding COSPROH when we started the inquiry. We conducted a lot of research in every government organisation in order to collect the necessary information. It was very difficult and it is still difficult to this date,” Mr Herath explained.

“There aren’t many people coming forward who are providing us with correct and completed information to help us establish the facts,” he added.

“Nonetheless I am proud to say that we have reached a stage where we have an idea of what happened and all that remains are for us to write our report.”

As to whether the commission can share their preliminary observations, Mr Esparon replied: “COSPROH is an extremely complex case which requires a lot of attention and of course we cannot provide a preliminary conclusion on the matter until we get to hear from everybody. It would be prejudicial to do so.”

First to appear before the commission yesterday was Mukhesh Valabhji, who was the executive chairman of COSPROH from 1991 up to early 2006.

He explained that COSPROH used to report directly to the president.

Mr Valabhji noted that he took up the post of executive chairman with the mandate to stop ‘the bleeding’ of COSPROH, which was seeing some of its assets such as Mahé Beach Hotel allegedly making around R1 million loss per month.

This was done through privatization wherein COSPROH either disposed or leased its immovable assets to generate revenue and pay its debts.

According to Mr Valabhji, all proceeds were paid to COSPROH or the Ministry of Finance and he added that all of the transactions were audited.

COSPROH, a former state company, was set up in the early 1980s and operated up to 2006 when it was liquidated and its properties were disposed of.

The company was established to manage state-owned hotels and tourism properties through long and short-term agreements.

The commission of inquiry was set up in 2018 with the objective of establishing the extent number of immovable properties held by COSPROH, the manner of the disposal or lease of the properties during the process of its privatisation, and whether independent professional valuations of the properties were conducted.

The commission is also tasked with investigating the proceeds collected from the disposal or lease of the COSPROH properties.