Michael Pillay, who affirmed he was a staunch supporter of Seychelles’ independence from Great Britain but strongly opposed the coup d’etat and was vocal about it, has recounted to the Truth, Reconciliation, National Unity Commission (TRNUC) how psychotic drugs was forced into his body before he was declared as having psychiatric problems.

Also in yesterday afternoon’s sessions, Rodrick Larue and Maryse Eulentin – the parents of Damendra Eulentin – gave a tearful and moving account to the Commission of their son’s torture and subsequent death.

Michael Pillay was the first to appear before the Commission yesterday morning. He was a general witness who had previously been before the Commission but apparently failed to give a complete story so he came back as he felt ready to tell the other part of what he went through in the aftermath of the coup d’etat in 1977. But before that, Mr Pillay clarified certain allegations against him in relation to the death of Hassanali and Gilbert Morgan, contrary to what their families believe. He affirmed that he does not know anything as to what happened to the two men. He said he was a carpenter and many people came to his workshop to place orders for different pieces but other than that he was in the business of carpentry and not killing.

Concerning his own experience as to what he went through for opposing the coup d’etat, Mr Pillay said he was caught by police and held in custody a few hours before being taken to hospital where he received the injections. He explained that not once was he presented to any lawyer or judge.

Mr Pillay explained that it was Dr Ah Moy who gave him an injection on each knee and when he came to think about it now he wants to know if they were not the reason for all his pain which came to a head in 2010 up to June 2011 when with the support of family members he returned to Canada to have his knees replaced. He had previously returned from Canada to resettle here to resume his carpentry business but the pain became unbearable and all the medical solutions proposed were not working.

Back in Canada he was operated on one knee in December 2011 and on the other knee a year later in December 2012. He left Canada on July 7, 2013 to come back to Seychelles.

“I really need to know if the two injections as well as different other medications which I was forced to take have played a role in damaging my knees,” he lamented. Mr Pillay recalled that at that time he also gained weight and had a bloated size 37 body when he used to be only size 32 which he has now reverted back to.

When he was ill in Seychelles after taking all the medication and injections, Mr Pillay was determined as having psychiatric problems, something he said he has always deep down believed was not true. He recounted in details the time spent in psychiatric and the treatment he endured together with one of his friends. Once he left psychiatric after a couple of months and tried to resume his business he recounted how he and his partners worked hard to secure a series of contracts and how different high profile officials exploited them and refused to pay them large sums of money after the projects were completed.

Asked if he had made any attempt to meet France Albert Rene to talk to him about what he was going through, Mr Pillay said three times he tried to seek an appointment with Mr Rene at Maison du Peuple but all attempts were denied.

He added that almost seven years now since his return to Seychelles he has not needed any medication until now. “So was I really ill in the first place to need all these medication which resulted in my knee problems?”.

Once he got to Canada Mr Pillay had a thorough medical examination and he produced to the Commission medical documents he received in Canada which certify he has no psychiatric problems.

Mr Pillay affirmed that his family all along supported independence from the British but not the coup d’etat and all the human rights violations and abuses that followed including those suffered by himself and up to now his wife is afraid to live in Seychelles.

Rodrick Larue and Maryse Eulentin had brought a case to the Commission to seek justice and closure in the tortured killing of their son. Ms Eulentin affirmed that she came before the Commission so that her mind would be at peace three days before the date that her son was killed at the age of 26 on March 6, 2007.

“All this time I have remained quiet, I have kept a low profile but I have been silently suffering inside with a lot of questions going around in my mind,” Ms Eulentin said.

She showed before the camera her beautiful son before his death and the bloated and disfigured lifeless body that as a mother she saw after he was killed and which will remain imprinted on her mind forever.

Ms Eulentin stated strongly that everybody knows the alleged culprit of the atrocities and she named him as Jemmy Marengo. Ms Eulentin had six children – three daughters and three sons before Damendra was killed. She described her 2nd born as a studious pupil at school, never showing any sign of having a bad character, never had any problems at school, he had a good education, he went through the National Youth Service, the Polytechnic before deciding to make a career in fishing. He worked hard and he had gradually developed to possess his own fishing boats and at the time of his death he had three fishing boats providing work for a number of people, his mother affirmed.

She recounted how at around 11pm one evening in late February 2007 she received a phone call from Damendra who told her to leave her kitchen door open and that he will come by if he had the chance to cross the marsh behind Seychelles Breweries because Jemmy Marengo and his team were after him. He said where he was he could not talk for long.

“I stayed awake but he never turned up,” Ms Eulentin recalled. She said the following morning she was disappointed because his old room was empty. Damendra, who had formed his own family, was living with his girlfriend at Belvedere. She said his phone remained unanswered and she had started to worry until he called her back noting he was in the shower.

Later the mother and son had a private conversation and the mother affirmed that he confided in her that Jemmy Marengo often borrowed one of his boats for a lot of transactions but never paid him a cent and he was always aggressive towards him if he was to ask for any money. She said this was two weeks before his death.

She went on to recount how she learnt of her son’s death while she was at work on the Cat Cocos and the subsequent police request for her to come and identify the body at the mortuary after it was picked from the sea at Providence. Ms Eulentin tearfully described how she found the body of her son tied up to a fish trap and a heavy piece of concrete which many people who know said was seen at Jemmy Marengo’s house. She said her son’s eyes were gauged out, the skin on his head was peeled away, his hands were tied behind his head, black and blue bruises covered his body, his penis was sliced, there was a hole in his neck… He was buried without any clothes but in a body bag provided by the police.

“We never received an autopsy report. We were only told that it was not a drowning incident and they could not elaborate further,” Ms Eulentin stated.

Ms Eulentin said a week after she buried her son, she asked to see President James Michel in the presence of the Commissioner of Police, then Mr Gerard Waye Hive, asking for a follow-up on the case and to show Mr Michel photos of her son’s mutilated body and asked him why her son was killed. “I asked Mr Michel how he would have felt as a parent. He scratched his head and said he was not aware of the case.”

It will be 13 years on March 6 since Damendra died. Ms Eulentin affirmed she was threatened and spied on when she was transferred from Cat Cocos to the airport. Many people warned her of the threats that Jemmy Marengo was monitoring her movements. But she said she firmly believes in God and was confident He would protect her. She was later transferred to Four Seasons where shortly after God answered her prayers; she was offered a babysitting job with an Arab couple. She stayed abroad for six months but returned after her father fell ill.

Both Ms Eulentin and Mr Larue said they received a lot of information from different people after the death of Damendra. The visibly distraught parents tearfully made a plea to all the different persons involved in the torture of their son to come forward to tell the Commission and the Seychellois public of all they know to liberate themselves and find closure to the sad incident and help the family also to find closure. Ms Eulentin said she is confident and firmly believes that the truth will prevail in the end.

“The Commission is mandated to receive and analyse complaints of human rights violations related to the coup d’etat of 1977, to determine the truth of those allegations, to help bridge divisions caused by human rights violations, to recommend compensations for the victims, rehabilitation for victims and perpetrators and to determine petitions of amnesty for perpetrators. Its ultimate objective is to unite the people of Seychelles around the common agenda moving forward with confidence that such violations would not recur.

She noted that while the Commission has extensive coercive powers, it has to date relied upon the cooperation of the people of Seychelles to assist it in meeting the objectives of its mandate through voluntary engagements with its processes.

The Commission is aware that there are many people with relevant information who are not coming forward.

“To encourage those persons the commission wishes to advise of the possibility of the assignment of a pseudonym so their identities are not disclosed along with the availability of closed sessions so the context of their evidence is not disclosed. The Commission also considers it important at this point to make a special plea to those who are alleged to have committed human rights violations. The Commission notes that for the most part persons who are accused of human rights violations deny responsibility. This is not what is expected from a truth commission process. There can be no reconciliation if those who bear responsibility do not come forward. The Commission wishes to emphasise to alleged perpetrators that it is not judging them or seeking to have them punished. But its amnesty provisions do require perpetrators to make a full and frank disclosure and to express a sincere apology. The Commission is urging those who committed human rights violations to come forward, engage with its processes and contribute to the process of truth telling and help lay the foundation for reconciliation of the people of Seychelles.

The Commission resumes its hearings this morning. 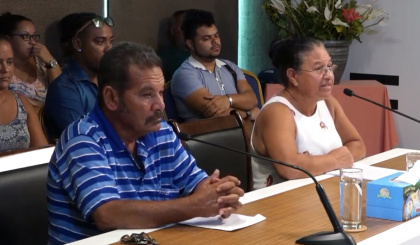 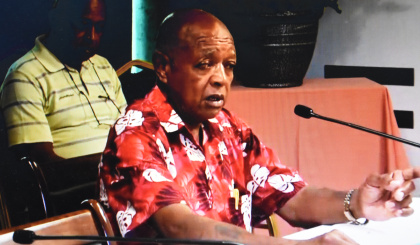