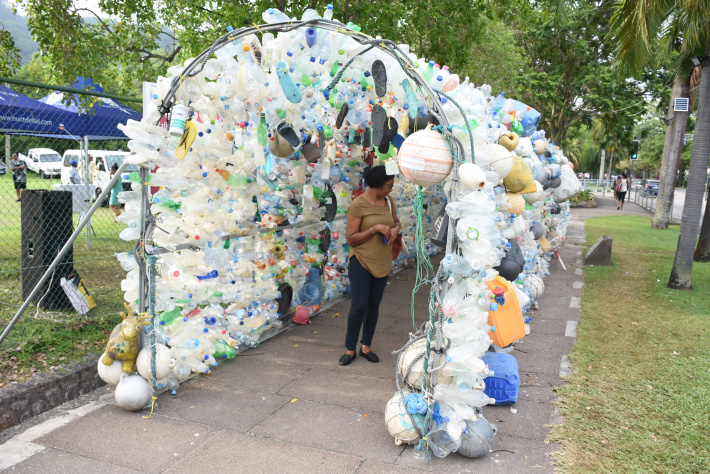 Many were over the weekend baffled by a new installation just outside Freedom Square, Victoria, which on Saturday started off as a simple metal arch and officially launched yesterday as the ‘Plastic Ocean Arch’, a piece of art aiming to raise awareness of the dangers of plastic pollution to marine life.

An initiative of the Ocean Project Seychelles, a non-governmental organisation (NGO) established in November 2016 in response to mounting issues affecting the marine environment in Seychelles, the arch, made of mainly plastic bottles, is the end product of some of the litter collected from beach clean-ups and the outer islands clean-up project, for which the NGO collaborated with the Islands Development Company (IDC) in March last year.

Of the 10.56 tonnes of rubbish collected on the eight outer islands, plastic bottles were the most common in addition to flip flops, glass bottles and fishing equipment, all of which have been used in the installation.

In her opening address, secretary of the Ocean Project Seychelles, Natasha Burian, emphasised the role of the ocean as the heart of planet earth, providing food, air and regulating climate.

“Human actions are leading our ocean to the brink of a catastrophe; we are losing our marine biodiversity at an unprecedented rate, marine habitats such as coral reefs and seagrass are threatened by warming temperatures and ocean acidification, ocean ‘dead zones’ or areas without oxygen are increasing at an alarming rate. Together with all this, we are using our ocean as a dumping ground; it is estimated that the ocean is accumulating waste, particularly plastic waste at a rate of a garbage truck load per minute,” she said.

Ms Burian continued on to note the numerous efforts of the Ocean project Seychelles in organising regular beach clean-ups around Seychelles, commending initiatives such as the Aldabra Clean-Up Project organised by the Seychelles Islands Foundation, also in March 2019.

Referring to the archway, Ms Burian noted the objective of the art piece is to raise awareness of the implications of marine debris and to encourage people to be more conscious about their plastic consumption, and to make the switch from disposable plastic items for reusable alternatives.

“Our ocean is drowning in plastic. We hope that when people walk through the archway, they get a glimpse of what it might feel like for sea creatures to have their natural habitat taken over by plastic debris. We hope that this art piece will provoke the public to think about their consumption and will dispose of their waste responsibly, especially when they go to the beach,” Ms Burian added.

The piece was created by three artists, namely, the late Allen Ernesta, Charles Dodo and Jude Ally with help from students from Plaisance secondary school and the Independent School with the support of various individuals and business organisations who supported the project by providing storage space for the plastic bottles, in putting the piece together and preparing for the launch.
Artist Charles Dodo noted that they experienced some difficulties in putting the piece together as the plastic bottles were often stolen, and it was especially difficult to group the artists together. Mr Dodo also urged the public to go through the archway and not around it and to interact with the piece but to also be respectful of all the efforts of the different stakeholders and to not vandalise the piece, which is scheduled to be on display until the end of the month.

Former minister for environment Rolph Payet, who is now an international policy expert, researcher and speaker on the environment, climate and island issues was also present for the launch and applauded the efforts of the youth of Seychelles in taking action against climate change, making reference to the youth-led campaign to ban plastic bags.

“It is motivating to see our youths taking actions and making commitments to securing the environment for future generations,” he said.

All present observed a moment of silence to the late Allen Ernesta, who brought the project to life.

Ocean Project has for the past few years used beach clean-ups as a means to educate the general public about issues such as marine pollution, climate change and sustainable fisheries and to promote citizen science by sorting and collecting information on the litter collected, to facilitate research.

Together with six countries in the region are undertaking a national marine litter monitoring programme, being funded by the Western Indian Ocean Marine Science Organisation, to investigate the abundance, composition, source, accumulation and potential origin of maritime litter on three beaches on Mahé, namely, Beau Vallon, Ans Royale, Grand Police and on the outer island of Farquhar. 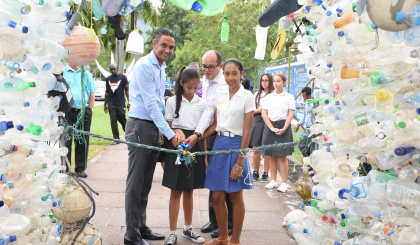 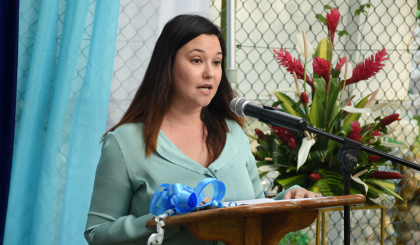 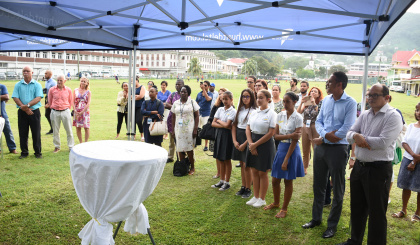 Message from the Ministry of Environment, Energy and Climate Change (MEECC) to celebrate World Wildlife Day on March 3 | 04.03.2020