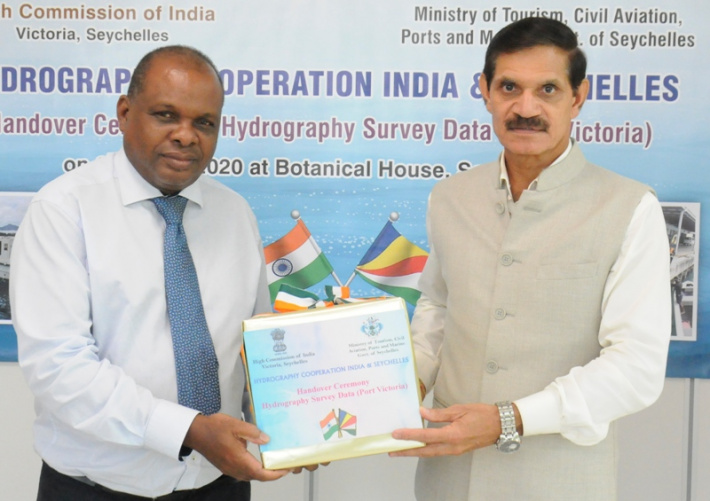 Hydrography data of the bathymetric survey conducted by the Indian Hydrography vessel INS Darshak in Port Victoria as well as Praslin and La Digue under sea water areas a few weeks ago have been handed over to the Seychelles authorities.

The Indian high commissioner to Seychelles, General Dalbir Singh Suhag, on Friday morning formally handed over theimportant data in digital format on CDs to the minister responsible for tourism, port and marine, Didier Dogley, in a short ceremony at the latter’s office at Botanical House, Mont Fleuri.

This was in the presence of the principal secretary for port and marine Allan Renaud, the chief executive of the Seychelles Ports Authority (SPA) Ronny Brutus, key officials from the department of foreign affairs, the Indian navy among other concerned officials.

“This momentous achievement in providing the data in such a short span is an ample example of the special relationship between India and Seychelles which is unique and founded on a deep sense of mutual trust and confidence and marked by a spirit of respect and equality,” HC Suhag highlighted.

“When the request to undertake hydrographic survey of Port Victoria in addition to Praslin and La Digue came during the visit of INS Darshak in December last year, we were more than happy to accommodate this request in the required timeframe,” HC Suhag explained. He went on to point out its importance for the SPA to save millions of dollars towards the port expansion dredging activities.

HC Suhag went on to stress that India sees Seychelles as a vital maritime security as well as maritime safety partner in the Indian Ocean neighbourhood.

He noted that the hydrography cooperation between the two countries started with a survey by the Indian Naval vessel INS Nirdeshak around Praslin, La Digue and the northern parts of Mahé in November and December 2003. Thereafter Indian navy survey vessels have carried out numerous surveys in Seychelles waters at the request of the Seychelles government.

“To give maritime safety of Seychelles the right direction, a memorandum of understanding on hydrographic cooperation between the two countries was signed in August 2015,” HC Suhag pointed out.

Expressing his gratitude on behalf of government and the people of Seychelles, Minister Dogley said we recognise and appreciate that the Indian government has done so much to assist us in having those new charts with updated data produced with the best technology as there was a lot of demand for them.

“We feel very honoured and proud to accept these data charts. We know a lot of work has been put in to collect, analyse and process these data and priority was given to complete these in a very short time, something we appreciate,” Minister Dogley affirmed.

For his part, chief executive Brutus pointed out that the importance of hydrographic data for the SPA is two-fold:

- With regard to navigational passage through the port limit which now with the updated data the SPA can ascertain with the highest degree of accuracy what are below our waters, where to go and where not to go. “It gives us a higher degree of accuracy and confidence and mariners can relate to an updated chart which is at par with international best practice and standards.”

- In line with port extension works which are ongoing and in terms of formalities prior to the construction phase, this data is crucial to ascertain the extent of siltation within the port in order to know how much and where to dredge and what are the difficulties foreseen when construction starts. “It will give the engineers more information so that when working on the designs they will know for certain they are addressing issues as they are beneath the waters alongside the quay and in the vicinity of Port Victoria.”

Mr Brutus said the SPA is very fortunate to have this data at this point in time when they are gathering other information for the port extension project and he expressed gratitude to the Indian navy.