In a case of arrest of her parents, three brothers and the killing of one of her brothers, Sidna Umbricht born Monnaie yesterday told the Truth, Reconciliation and National Unity Commission (TRNUC) of her family’s political persecution and death of her brother.

In a land acquisition case, Ian Delorie recounted the ordeal of his grandfather after his property of prime land at Beau Vallon was acquired in 1983.

Ms Umbricht recounted how she travelled back to Seychelles in August 1983 after learning that her parents, Sidney Monnaie and Marie-Thérèse Monnaie born Constance and three of their sons, had been arrested on August 19, 1983.

She told the Commission she only wanted an explanation why her family had been arrested.

She recounted her meetings with the then Commissioner of Police James Pillay and President Albert Rene.

She arrived in Seychelles on August 28 from Germany to see Commissioner Pillay who simply told her: “I told you not to come because everything would be ok”. She later learned from CID officials that her parents were being held at Glacis, one brother at Anse Etoile and two others on Praslin.

Not long after that, she could see her father, mother and one brother. Two other brothers were being held on Praslin where they lived. Her brothers were Gerard, James and Claude Monnaie. They too were released the same day.

A few days later her brother Claude was set alight when a cocktail Molotov was thrown in his cousin’s truck in which he worked transporting goods around the island but somebody pulled him out and dragged him in the banana plantation before a passer-by helped him and took him to hospital. He was later transferred to Mahé for further treatment.

The sister stayed in hospital with him in the ICU for three weeks where he was the only patient, all the while not knowing that he was severely burnt on his back. The doctors and nurses who tended to him always made sure he was lying on his back and he had a tube inserted in his throat. But no nurse and no doctor told her that her brother had been burnt on the back and she did not know. She also had no idea where his clothes and personal belongings had gone to. But that day she was encouraged to go home for some much needed rest, and on that same evening her brother died.

Ms Umbricht believed the tube in his throat was to feed him but also to prevent him from speaking clearly. The doctor treating him told her he was doing fine and this is why the sister believed they finished him the night she left him alone in hospital.

She was in the process of getting everything ready to take him abroad with her.

Ms Umbricht stated that she was not allowed to see her brother’s body during autopsy and also refused the autopsy report.

The Commission informed Ms Umbricht that it would try to get as much information on the burning of her brother as well as try to identify who was responsible and also find out what really happened at the hospital and why the doctor on call that evening did not answer the phone in the early hours of her brother’s death. As a result more people will be called in to say what they know.

Asked as to what sort of redress she was looking for, Ms Umbricht said she wants to know why these things happened to her brother and her family.

Ian Delorie complainant in a case of land acquisition

Mr Delorie affirmed that the land ordeal of his grandfather started on June 13, 1983 when he received a letter from Patrick Lablache informing him that the government intended to acquire his property at Beau Vallon but will leave him only his dwelling house. He was aged 79 years old at the time. Another letter followed on July 5, 1983 informing him that survey of the property in preparation for the acquisition was about to start. Another letter came on September 14, 1983 to confirm the acquisition process and asking him to make his compensation claims. Mr Delorie read to the Commission the different letters his attorney exchanged with the Ministry of National Development. He explained how in the compensation claim it was said that his grandfather was not benefitting from any proceed of the land when in actual fact there was a vegetable farm which produced a variety of vegetables like pumpkins, sousout, as well as a large variety of root crops and was very popular in the northern region for that. He was offered only R225,000 for the 27 acres of prime land in the north in the vicinity of Tequila Boom.

“This was really crazy,” said Mr Delorie. The offer was increased by another R25,000 after his grandfather informed that the original offer was too low but still he did not accept.

The property, which was supposedly acquired in the public interest, was used to rear cows and plant trials of potatoes which was not a success. The land remained abandoned for many years until a government official offered to negotiate on his behalf for the true value of the property.

Finally he was made an offer of R1.5 milion to be paid in installments over a period of three years. By then he was aged 90 years.

“The land was never for sale and my grandfather lived from the proceeds of his property, it was acquired and at the age of 90 he received R1.5 million so he had no choice but to accept but this clearly shows that it was a malicious act,” he stressed.

“The family is therefore seeking compensation because we believe that the government of the day should recognise the wrong-doing of the past and should compensate the family because there was enough land for the different members of our family. Today the property has been sold in parts to different individuals, leased to certain businesses and what remains is in a state of neglect,” Mr Delorie affirmed, noting that these can be revoked.

“Why can’t the family, the rightful owner benefit from the business being run there,” he queried.

Meanwhile Mr Delorie also told the Commission about his political ordeal which started after he took part in protests against the NYS and the continuous political persecutions he endured after that. How he escaped death when he jumped off from a jeep after he was arrested by soldiers and was being taken up to Sans Soucis to be apparently tortured; how he was shot at but escaped unhurt and dragged himself to a friend’s house in the vicinity.

After that he went abroad to Switzerland for four months before returning to Seychelles. He noted that the harassment resumed with army vehicles following him and parking for long hours at his family home. He was afraid to sleep at his house. He said he was never involved with anybody in England but surprisingly his name was mentioned in the Konplo 412.

Following the incident he was very afraid for his life when a friend encouraged him to see Albert Rene and share his concerns which he did. During their meeting, also attended by Ogilvy Berlouis, the then Minister for Defence, he asked Mr Rene for his peace of mind and tranquillity. Mr Rene gave him his word that he was going to have peace and he did. He even offered him a job which he turned down. 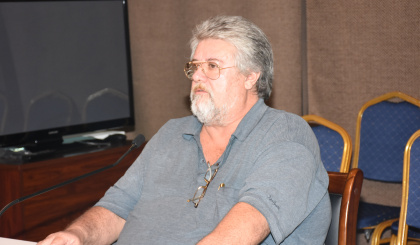