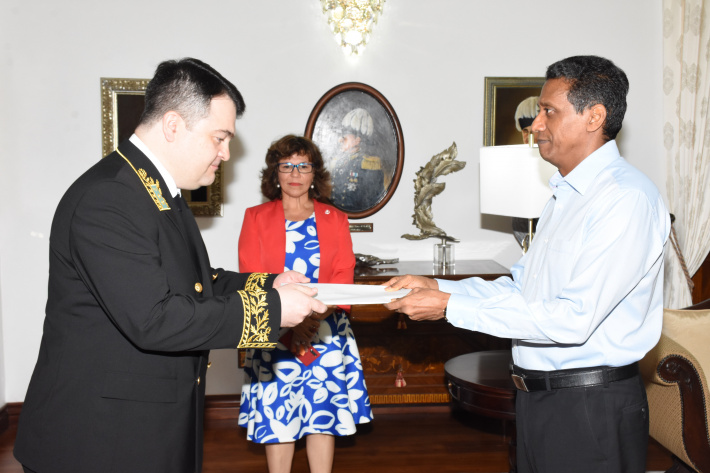 Strengthening of relations, fighting the coronavirus (COVID-19), combatting international terrorism, maritime security, scientific, tourism, economic co-operation and fishing were among a dozen of topics discussed by the newly accredited ambassador of the Russian Federation to the Republic of Seychelles, Arlem Alexandrovich Kozhin, and President Danny Faure yesterday morning at State House.

Ambassador Kozhin, who was received by a guard of honour, presented his credentials to President Faure, thus making his first appearance as an ambassador following a long career as a Russian diplomat, both locally and abroad.

Speaking to the press after his meeting with President Faure, Ambassador Kozhin hailed Seychelles’ participation and contribution in the Russia-Africa Summit and Economic Forum held on October 23-24, 2019 at the Sochi Olympic Park Main Media Centre, which he claimed has helped to open new doors to boosting economic co-operation between Russia and countries of the African Union (AU) including Seychelles.

“We were all impressed by the participation of the President of Seychelles in the investment section of the economic forum and I hope that it will additionally boost the economic co-operation between our countries,” Ambassador Kozhin said.

Ambassador Kozhin added that as his country will be celebrating the anniversary of Yuri Gagarin’s first flight into outer space on April 12, 1961, it would be symbolic in the near future for his country to begin co-operation in space exploration with the Seychelles, as part of the celebrations.

“Of course we all have to fight with the negative consequences of climate change, which is very important for this part of the world and this is one more sphere where space technology can be very useful. Space is not only about science but it’s also about saving the planet,” Ambassador Kozhin said as he further noted that his country is very optimistic in fulfilling the space exploration dream with our country but only through a political will.

Considering Seychelles as a desiring tourist destination among the Russians, Ambassador Kozhin said he would see that more Russian tourists visit our country while he will also look into more investment opportunities between our two countries.

He also encouraged Seychellois locals to visit Russia and to share cultures now that Russia will, among other several celebrations, celebrate with Seychelles the 140 years of the first Seychelles-Russia contact through a Russian ship that docked in our waters.

Ambassador Kozhin replaces Ambassador Vladimir Belous who left at the end of January 2020 after spending six years as Russian ambassador to Seychelles.

Also present at State House were the secretary of state for foreign affairs, Ambassador Barry Faure and the principal secretary, Dr Marina Confait.