Patrick Lablache, former principal secretary (PS) for Habitat, Development and Planning, was once more called before the commission in regards to the acquisition of the Deltel property at Grand Police, a case brought forward by the Deltel family and Yvette Savy.

The Deltels are seeking the return of their property on the basis that the original acquisition was unlawful and the R14 million compensation was grossly insufficient and was only accepted under duress.

The property however has already been sold off by the government to Lumington Investment Seychelles Ltd. in 2007, in a transaction which was signed by Mr Lablache in his capacity as PS.

He noted that his research confirmed that in 1983 Raymond Deltel and one of his sons, presumably Alain Deltel, met with then principal secretary in the Ministry of National Development, Georges Payet.

A record of the meeting was kept in which Mr Payet allegedly wrote that the Deltel family “had no objection” to the acquisition and “hoped that government will compensate them adequately in cash”. They are expecting approximately R3.5 million.

During the hearing yesterday, Mr Lablache highlighted that not all of the Deltels’ properties were acquired by the government since a property adjacent to Grand Police, named Bazarka, remained in the Deltels’ possession.

“I’d like to mention that this property was sold in 2018 by the Deltel family to a Chinese company for R70 million,” Mr Lablache informed the commission yesterday.

Mr Lablache noted that the government gave permission and sanctions for this property to be sold and he presented documents of the land sale and sanctions to the commission.

He further agreed with the members of the commission to later go into closed session to provide further explanations on the matter.

“Following the acquisition of their property on December 23, 1983, Mr Kieran Shah who was representing Mr Deltel submitted a claim for compensation of R3.9 million which tallies with the record of the conversation where he was expecting R3.5 million,” Mr Lablache detailed.

“On June 17, 1985 , the government offered a compensation of R700,000 with an interest of 4% from the date of acquisition and the offer was accepted by Mr Shah on the condition that this is paid in cash with accrued interest.”

Thereafter the government offered to pay R200,000 in cash and the rest through a bond of 20 years bearing interest of 4% per annum.

Under the 1993 Constitution of the Third Republic, there was a provision that allowed persons whose land were acquired during the Second Republic (from 1977 to 1992/1993) to make a claim on their properties, either for return of these properties or compensation.

Mr Lablache asserted that Mr Deltel was among those who chose to do so.

“He [Mr Deltel] wrote a letter asking for a review of his compensation, because he was taking the opportunity under Schedule 7 Part 3 of the Constitution.”

“The government was receiving a lot of these requests in 1993 so the government had to set out a priority list; high priority pay top those who were not paid during the Second Republic and those who had already been paid were lower on the list.”

In April 1994, Phillip Boulle sent a letter on behalf of his client, Mr Deltel, noting that his client was seeking to recover a sum of R12 million which would allow him to purchase a new parcel of land to build a house.

Mr Lablache continued by stating that the government responded to the request with a statement that it was overwhelmed with a lot of land claims and that lower priority cases such as Mr Deltel’s needed to wait.

In June 1997, former President James Mancham wrote to President France Albert Rene in regards to the Deltel family stating that he would be negotiating the matter on their behalf.

Finally, in March 1998, an offer of R14.5 million was made to Mr Deltel through Mr Mancham and this was to be paid in a first installment of R800,000 and the remaining balance with an interest rate of 8% was to be doled out during five years.

“It is to be noted that, at that point, no one had ever received an interest of 8% on a compensation payment; it’s usually between 4 to 6%. But the government sought to display its good faith at the time since it could not pay the full amount in one go,” Mr Lablache noted.

According to Mr Lablache, Mr Deltel accepted the offer of 14.5 million and the first installment was paid in June 1998 and the schedule of payments ended in 12 June, 2012. Total payments amounted to R17 million, a flection of the 8% interest.

In a document that was signed in Australia and which Mr Lablache produced a copy, the compensation payment was subsequently divided between Mr Deltel, his wife and their three children.

“From the point of the view of the government, it felt that it had fully satisfied and discharged its obligations under Schedule 7, Part 3 of the Constitution. It asked people to come in to claim their properties, they were paid,” Mr Lablache told the commission.

In regards to the Lumington Investments Seychelles Ltd. transaction in 2007, Mr Lablache clarified that this was a company registered in Seychelles which at that time had two shareholders – Lumington Investment Limited, an offshore company in the British Virgins Island, and a businessman called Salem Al Neyadi.

“The government was removing its defence forces from Grand Police at the time and the government felt that the location would be suitable for tourism development. We received a lot of interests and bids from both local and foreign companies,” Mr Lablache underlined.

Since Lumington was already purchasing the property nearby, Petit Boileau, in a private sale, the government accepted to sell Grand Police to the investors for US $3 million in 2007.

He noted that the government was satisfied with the sale since it reflected the market price at that time and it was Mr Lablache, in his capacity as principal secretary, who signed the transfer documents.

Former police officer, Agnes Mondon, joined the police force in 1993 during the re-introduction of the multiparty system. After a few years in the traffic section and a brief stint at the police academy which was cut short, in 1997 wrote to the police commissioner in order for her to undertake a recruit course at the new academy. She further trained as lance caporal, and was promoted as thus, then undertook a fourteen-month cadet course in 1999. Ms Mondon highlighted that she has passed through every police station across the country, including on Praslin and La Digue, and excluding Port Glaud.

She had been called as general witness before the commission to provide clarifications during the period where she served as a police officer, based at the Seychelles International Airport, in the foreign exchange control unit.

Ms Mondon said that she was told she would be transferred to the newly created foreign exchange control unit just after completing her cadet course by then police commissioner Andre Quilindo.

Ms Mondon told the commission that she was hesitant to take up the task since she wanted to be posted at a police station to put in practice what she had learnt at the academy.

“Compol answered that I would fall under his responsibility but that I would receive directives from Mukesh Valabhji, who was the chief executive of the Seychelles Marketing Board (SMB) and economic adviser to the President, as well as the principal secretary for finance, Ahmed Afif.”

“Compol made it known that I would also sometimes receive directives straight from the President, which I found to be strange and I asked for a meeting to clarify the matter since I am a police officer who was being asked to take directives from civilians.”

This meeting which followed consisted only of Ms Mondon, Mr Valabhji and Mr Afif, she highlighted.

Ms Mondon explained that it was Mr Afif who spoke the most and gave the most directives during this meeting.

She learnt that the reports of the foreign exchange control unit and its seizures were expected to go directly to Mr Afif and Mr Valabhji rather than to the commissioner of police.

In the course of her duties at the foreign exchange control unit, Ms Mondon stressed that she was only following orders and the law that directed her duties, which is why it is unfair for some to paint her as a monster.

She explained that she was offered bribes at various intervals during those times but she was never able to be bribed.

During her intervention yesterday, Ms Mondon noted that she was good police officer with integrity but highlighted that many people did not like that fact.

“To be a true police officer, you have to put your work first and do so with your heart[…] and you don’t need a university degree…” Ms Mondon stated.

Ms Mondon noted that she also never took money from the foreign exchange seizures that were conducted by her unit and added that all of the money were sent to the Central Bank and those who wanted to claim their money had to go there.

“Once the money had been seized, I Agnes Mondon had nothing to do with it. I did not bring any money home and if any money was seized during the night, then it was left in the safe in our office at the Central Police Station. I was the only person who had the keys to the safe and the next day I would bring the money to Mr Afif at Central Bank.”

“Whenever I handed these money and documents over to Mr Afif, we counted the money and his secretary was always present,” Ms Mondon clarified.

She stressed that none of the foreign exchange seized went into her bank accounts or pockets since the money was deposited in the hands of Mr Afif.

Lucianne Beier yesterday brought forth her complaints to the commission in regards to acquisition of her property – which had been left to her by her parents – under the Lands Acquisition Act of 1977.

Her testimony was read by her brother, Robert Grandcourt.

“My sister’s land, PR170, bordered with the sea and road of Baie Ste Anne and Côte D’Or, the property was around 3200m ². The government took this land in 1985,” Mr Grandcourt noted.

At the time of expropriation, the land was valued at R205,000 but after paying off a mortgage of R150,000 and loan from Barclays, Mrs Beier was left with only R9000, Mr Grandcourt detailed.

In 1986 Mrs Beier was said to have no other choice but to accept a sum of R600,000 as further compensation which was paid in parts.

Her land was incorporated into the Marie Jeanne Estate, divided into plots and distributed to those who Mr Grandcourt said supported the political party in power then. 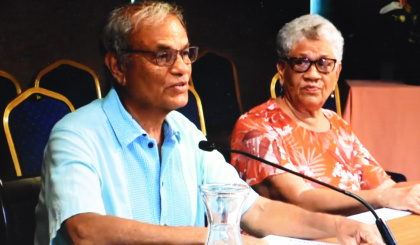 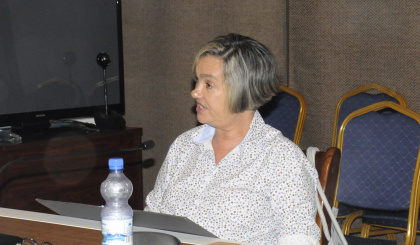 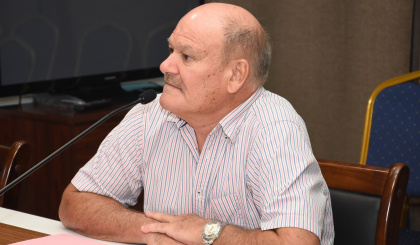