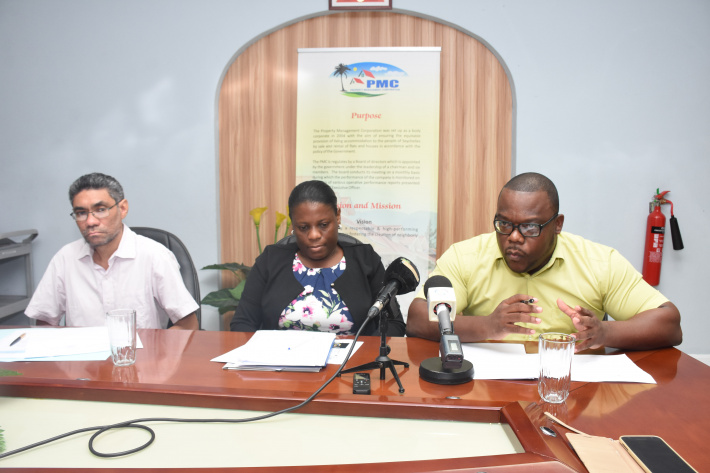 In his State-of-the-nation address, President Danny Faure announced that the Property Management Corporation (PMC) will be undertaking certain projects through financing of the PMC bond issued at the end of January 2020.

The projects include renovation works on blocks of flats, construction of sewage systems on a number of housing estates and re-roofing of government-built houses covered with concrete tiles. A sum of R30m has been allocated for these projects.

Evelina Antha, the chief executive of PMC, accompanied by the principal secretary in the department of infrastructure, Yves Choppy, and the PMC finance manager Nelson Augustin met the press last week to provide comprehensive details with regard to the financing, implementation and technical aspect of the project.

The government last year approved the mechanism to assist homeowners to re-roof their houses. Over 100 residents living in semi-detached/terraced houses built during the years 1997 to 2005 will benefit from this project this year.

Currently, there are 754 houses with roofing tiles out of which 571 are at Roche Caiman and the rest are spread out over several districts. 80% of those houses were constructed over 20 years ago and 75% of the residents have already paid off their houses. The estates prioritised to be re-roofed in this year takes into consideration the age of the houses and reports and facts of roof leakage. The concrete tiles will be replaced with corrugated zinc aluminium sheets.

“R10 million have been allocated for the renovation of blocks of flats including re-roofing and repainting of certain blocks of flats in the districts; R10 million will be used to construct sewage treatment plants on the estate where PMC is encountering sewage issues and another R10 million will be used to re-roof the houses containing concrete roof tiles in different districts where over 100 residents will benefit from that.

For houses on rental, PMC will bear the cost. The 15-year- old period starts as of 2018 because all houses after 2005 are covered with proper material,” explained Ms Antha.

What is the logic behind fixing the cost to be paid? “When we were revising the scheme, we established a minimal life span for the roofing structures that we felt that the owners will invest in the maintenance and also based on the materials used during that time, we decided a cut off line. Once buying the house with PMC, the buyers knew they were responsible for the maintenance of the house,” noted Mr Choppy.

As most of the houses are semi-detached, PMC found it more practical to have a coordinated scheme and do a general renovation rather than piece-work.

The sewage projects that connect the housing estates to the sewage system are being conducted at Grand Anse, Village Lesperance and Carana Housing estates. The budget also caters for a consultancy contract for a consultant to design for sewage management for the other estates.

Mr Choppy is urging the concerned residents to welcome this project as PMC is trying to facilitate the renovation without them having to go through the hassle.

Mr Choppy stressed on the fact that the current design used by the government is still solid to deal with the effects of climate change. “But if we get cyclones, then the roofs will not resist. We are already working with other non-governmental organisations and the Planning Authority to look into this probability.”

Ms Antha noted that all those whose houses are concerned, the government will pursue the project next year. “We will come to you and together with your district administrator, we will present you with the project and will advise you when it will start. There will be a repayment scheme for the projects by the clients. PMC will do all the payments for the renovation projects but the clients will have to pay back on a monthly basis through an agreement with the PMC. But all these will be decided with each client after consultation,” concluded Ms Antha.