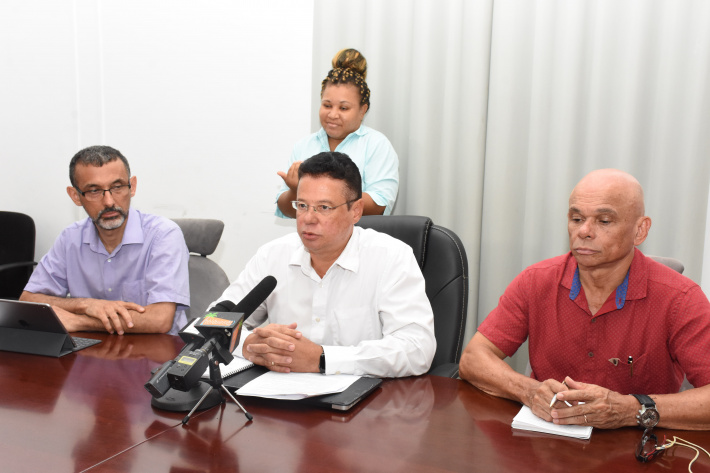 Two cases were confirmed on Saturday March 14, 2020 following tests conducted on a Seychellois couple who had arrived from Italy on Wednesday March 11, 2020 while the third case was confirmed yesterday evening following investigatory test on one visitor who arrived from Holland on that same day with his partner.

Both couples (the Seychellois couple from Italy and the visiting couple from Holland) arrived in Seychelles on board the Emirate EK705 flight.

Upon arrival in Seychelles, the Seychellois couple travelling from Italy were transferred to the quarantine facility in Perseverance where they were monitored daily by health professionals. It was on one of the rounds, on Saturday March 14 that one of the individuals expressed that she was not feeling well and was having mild cough.

The decision was taken to test both individuals as they were quarantined in the same quarters separate from others at the facility. It was also later confirmed that the couple had been in contact with someone who recently tested positive for COVID-19 in Italy.

Following this confirmation, the couple were moved from the quarantine unit at Perseverance to the isolation centre at Anse Royale hospital where they are being monitored.

As for the couple travelling from Holland, one of them presented with mild respiratory symptoms and given his travel history, doctors who attended to him ordered the necessary test and he was placed in isolation at the Anse Royale Hospital.

The visitor was accompanied in isolation by his partner who will also undergo necessary testing as well.

The couple will remain in the isolation unit at the Anse Royale Hospital for treatment and care and their condition has been described as “stable”.

To update the public about the ongoing measures being taken following these confirmations, the Ministry of Health organised a press conference yesterday afternoon. Leading the press meet were Dr Jude Gedeon, Public Health Commissioner; Dr Danny Louange, chief executive of the Health Care Agency, and Paul Labaleine, principal secretary in the Department of Risk and Disaster Management.

It is to be noted that the third positive case was confirmed after the press conference was held.

Referring to the couple from Holland during the press meet, Dr Gedeon said they fell ill and were admitted in the isolation centre “with tests currently being done”.

Dr Gedeon said the man was experiencing shortness of breath with fever since Saturday night, but he was stable.

He noted the main thing they are doing right now is contact tracing individuals who have been in contact with the two couples.

All the passengers from that Emirates flight are now scattered around the country, with some on Praslin and outer islands. However, Dr Gedeon remarked that they have managed to get in contact with all the people that may have come in contact with the couples and over one hundred individuals were being observed at their places of residence.

Dr Gedeon added that when the couples were placed in quarantine they were showing no symptoms which means the risk of transmission was benign. However, through contact tracing they will be able to be more certain about the status of the other passengers.

He further added that currently they have recorded only imported cases, meaning that the person caught the virus in another country and not locally.

He also added that they have been in contact with SPTC to make sure that it is doing the necessary to sanitize and clean their buses.

As a preventive measure the Ministry of Health will also be implementing measures to screen people visiting heath care facilities in the country.

This will be done in a facility outside the health care service in tents.

“The reason we are doing this is to find people who may be showing symptoms of the virus. We are asking for the cooperation of the general public because it is a preventive measure that will safeguard not only the public but health professionals as well,” said Dr Louange.

He also pleaded to the public not to use the casualty for non-emergency cases but preferably use the 24/7 clinics available in most districts.

Dr Gedeon also advised against the use of face mask which he said will not prevent people from getting the virus but rather increase their chances.

“Proper hand hygiene and use of tissues and wipes is the best preventative measure you can use,” said the doctor.

He added that people should avoid handshakes and touching their faces and should use a tissue when sneezing or coughing.

“The role of DRDM is to join with the department of health to activate our emergency plans, one being Public Health Emergency Operations Centre Network which is a designated public health emergency management personnel assemble to coordinate operational information and resources for strategic management of public health events and emergencies,” said Mr Labaleine.

He added that they are working with partners like the police and SPDF and mobilising all the resources in order to provide service and support.

DRDM is also making sure that the network of communications is working smoothly including working alongside service providers to make sure that the public can be notified through alerts on their devices.

Dr Gedeon reminded the public that the government is acting accordingly and everyone is working in the best interest of the public. However, he said, their job becomes more challenging when they are constantly being berated and insulted by the “self-appointed doctors and experts” on social media.

One thing that has been common in all countries affected by COVID-19 is the panic that comes with it, with people heading to their local supermarkets to stock pile on provisions.

After the announcement of the first recorded case on Saturday evening by the health commissioner, many Seychellois headed downtown yesterday for panic shopping. This might seem like the smart thing to do but we are neither in lockdown mode nor under quarantine which means that sooner or later items will start going out of stock and real panic will ensue.