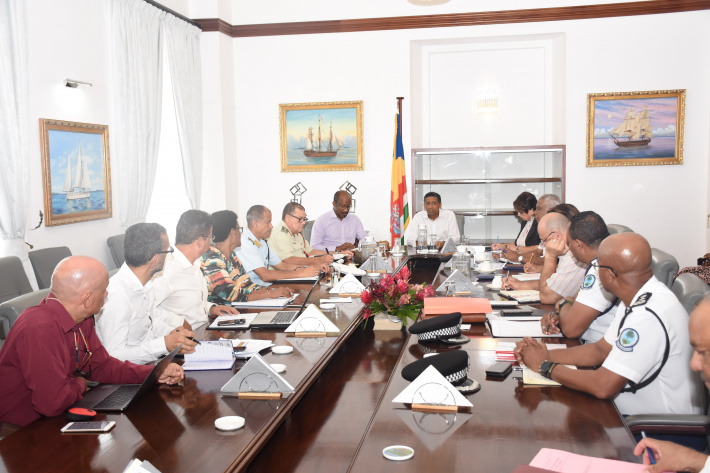 President Danny Faure on Saturday chaired the First Joint Command Chain meeting with the Seychelles People’s Defence Forces (SPDF) and Seychelles Police Force to discuss the current situation pertaining to the COVID-19 pandemic in the country, and the ways in which they can further assist the department of health and civil authorities in their efforts to stop the virus from spreading.

“The meeting was an opportunity for discussions on ways to improve coordination between the police and military, so we can all be on the same page and where communication flows. As you know, the police have been assisting the Ministry of Health and other agencies and will continue to do so to cater to their needs as they arise. The work is never easy and we need to be committed, and it is made harder when the public do not cooperate, and take the situation lightly as they currently are,” said Ted Barbe, Assistant Commissioner of Police, urging the public to listen to the advisories and refrain from large crowds and gatherings.

“We are encountering difficulties in particular with social distancing as people are not following the advisory, people are still meeting in large groups, holding parties and having picnics and this is not advisable. People need to understand that if the virus is to spread in our communities, we will find ourselves in a very difficult situation so we are discouraging people from grouping at St Anne Jetty, the Docklands car park, from hosting picnics and urging that they take the guidelines seriously until the situation calms down.”

Mr Barbe proposed that some measures will be reinforced in a bid to limit unnecessary movement and large groupings, with the police authorised to physically remove persons found to be in large groups and punishments being applied for non-compliance. Again, he called for the public to cooperate with the authorities at this critical time.

The SPDF has also had its hands on-deck, assisting the department of health logistically with contact-tracing, offering up a barrack as a quarantine centre as well as their medical facilities, assisting with the transportation of equipment and other logistical needs. Furthermore, the authority has posted military personnel as security at the Anse Royale Hospital which is serving as an isolation centre.

“The president in his address requested that we activate the reserves and we have devised a plan to manage this. It is important that they turn up when called,” Colonel Rosette said.

The joint command chain was established to maintain law and order should there be additional measures against the spread of COVID-19.