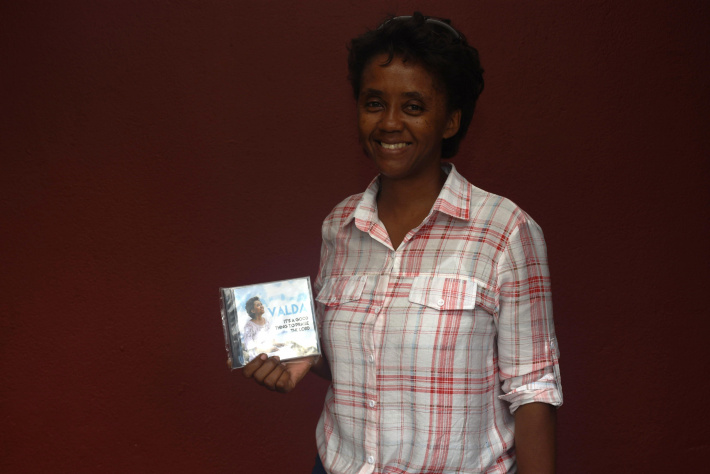 Valda with a copy of her new album (Photo: Jude Morel)

Educator Valda has always had a passion and interest in music, but for the longest time remained uncertain about the type of music she should delve into. After once attempting to record a track, about love, she decided to give it a rest and not to release it onto the local market until a few years ago when the desire to sing and be heard was once again aroused. She recalls at the time, she had decided to sing praises to God through gospel music, resorting to prayer for inspiration.

“Around three years ago I prayed, letting God know that I wanted to sing him praises and to inspire me, and I started to discover that his word is filled with promises, with words of encouragement and most importantly, things that make sense and that people need to hear, especially in this day and age,” says Valda.

“In all circumstances, people are faced with frustrations and expectations and it is about what God can bring to their lives and what having faith can do for them. So before I realised it, I had the 11 tracks which are featured on the album,” Valda says.

Entitled ‘It is a Good Thing to Praise the Lord’, the album boasts 11 tracks in all three national languages – English, French and Creole – all of which were produced and recorded in around two years. Four tracks were recorded at Tribeats Studio with the additional seven produced by Peter Jules at his studio at Anse Aux Pins.

“I have always been a believer and to discover God through his word, is something great which leaves one feeling complete as they know that whatever they do they will not be doing alone, but rather with the guidance and under the protection of God. By faith, one can succeed in all things,” Valda asserts.

Among the songs on the album are Priy pour ou zanfan lo ou zenou, Dan ou Tanp and Zan I vwar trwa Lanz.

“I like all the songs as they all address different circumstances and they all somehow differ from one another. I particularly like the one in French based on Psalms 96 and this one is very soft and almost just acoustic with melodies from only a piano and guitar. I try to make songs that people can relate to and which carry a message,” an enthusiastic Valda adds.

Priy pour ou zanfan lo ou zenou is another track dedicated mainly to parents who today feel discouraged and disappointed with the paths chosen by their children and they feel as if they’ve lost their grip over their children. The message of the song, says Valda, is to not lose hope because the Lord sees all of their hardships but to simply trust him and lay their burdens on him. As for those children who have lost their way and fallen into addiction and other negative influences, Valda proposes Konbyen Fwa, a song inspired by daily life in Seychelles.

“Walking through town and seeing our youths dive in bins to collect cans and PET bottles, I’ve come to observe that they do not mind how dirty the bins are or their sense of dignity but instead dig as if they are searching for buried treasure. It is heartbreaking and I wrote the song to them, as a reassurance that someone hears their cries and sees their sufferings. That God understands the heavy baggage that they carry. It makes me especially happy that people appreciate the song and passers-by have been stopping me and telling me how the song is a source of comfort for them. I think it is important for people to remember that Jesus is only a prayer away,” Valda adds.

Other tracks include Zan I vwar trwa lanz, Donn Zezi ou leker and Mon Bondye about the all-powerful God. As for Nou promes, Valda originally wrote the song as a wedding present to one of her close friends.

Since the album’s release last week, feedback has been positive, with numerous comments popping up on social media platforms and even some proposing that it is the best gospel album to be produced locally thus far.

Valda considers herself lucky and blessed that it has finally reached the market, noting the wonders of God have worked in her life to help it reach the shelves, especially since she herself lacked the finances to materialise it.

Prior to the release of the album, some singles has been making rounds on the airwaves and seems to have become favourites among the local audience.

“I was honestly not expecting the reception as everyone seems to want a copy regardless of their religious belief or background. I thank God for the positive reception from people I was not even expecting and there is no better feeling than when a passer-by stops me to tell me it has inspired them or gives them some form of comfort,” Valda says.

The album is available from Valda and her close associates for R150.

“Praise God through all we do. This is not a time for us to fuss and fight. Get your copy early as I do not have many for the time being. I hope all the songs bless your heart and that you always have love and respect for God,” Valda says.