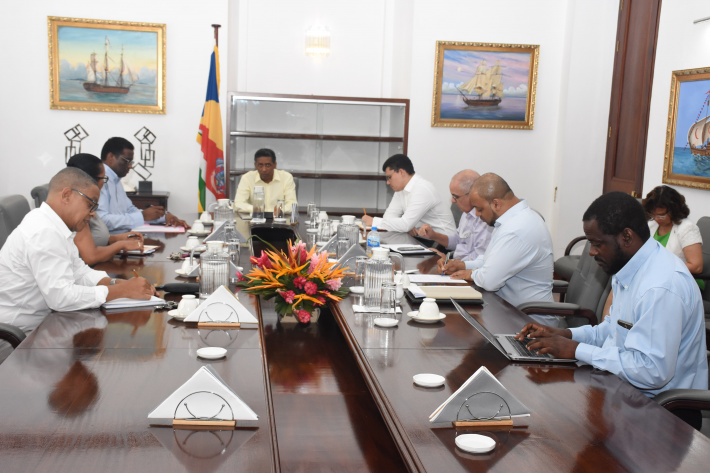 The Minister for Fisheries & Agriculture, Charles Bastienne, has said that the country is on a solid footing as far as food security is concerned.

The minister made the statement to the press following the first meeting, yesterday afternoon at State House, of the high-level committee for food surveillance security in our country which was also attended by President Danny Faure.

The aim of the meeting was for representatives of various organisations represented on the committee, dealing with the importation of food or other related commodities required for the country, to discuss and to harmonise the country’s food security in relation to availability of sufficient stock in the wake of the coronavirus (COVID-19) pandemic.

“Today the different agencies presented to the committee, in the presence of the president, their present stock level, what they have, what will be arriving in two to three weeks etc.. and I can tell you that based on what has been presented today, the country is on a solid footing as far as food security is concerned,” Minister Bastienne, the chairman of the committee, said.

He noted that the committee is here to make sure that the basic foods are available amid the COVID-19 pandemic.

Minister Bastienne noted that it is the job of the committee to do this surveillance and to obtain regular reports of the situation out there, so as to analyse and to establish that the country has sufficient stock of food it requires for the population.

Minister Bastienne said that cargo vessels will still be coming to Port Victoria while also, based on pest risk assessment, the country looks to import perishable goods from countries in the region like Kenya and Ethiopia among others.

He said that STC has a solid stock of basic commodities and that Seypec also has the same level of stock in terms of fuel and LPG.

As STC is not the sole importer in the country, Minister Bastienne said that SCCI is helping to assess the stock in food commodities among its members and also to encourage them to beef up their stocks to meet consumer demand in this critical time.

He noted that with the shops well stacked with commodities, people should not worry about food shortages as the committee will be working in the background to make sure that shops continue to replenish among other decisions that will be taken with regard to food security in the country.

As regards to boosting local agriculture production, Minister Bastienne said that the committee will find mechanisms to assist farmers through the livestock trust fund while the Farmers’ Association will also look into ways to engage famers in agricultural production.

Minister Bastienne said that his ministry is in consultation with the fish processors and the Fishing Boat Owners Association with regard to availability of fish on the market. He noted that he will be in a better position to make a pronouncement on the matter soon, after consultations with stakeholders in the industry now that fishermen are having difficulty to sell fish to hotels due to lack of tourists at those establishments.

The committee will be meeting every Monday to analyse the situation on the ground in relation to our food stock.