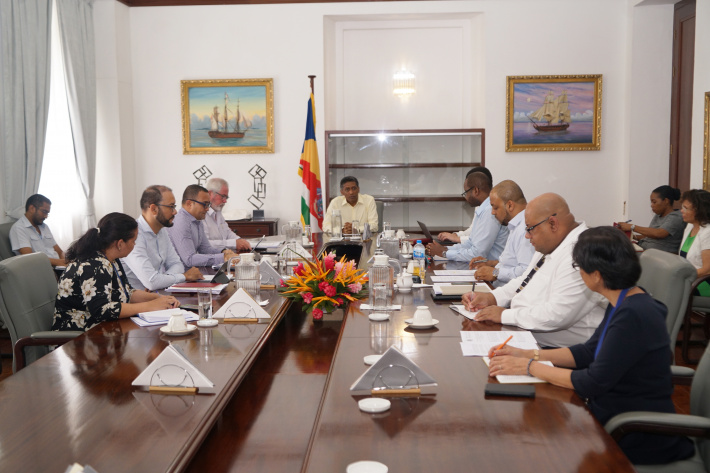 Members of the committee during their meeting yesterday (Photo: Louis Toussaint)

Government will as from the end of April 2020 assist with the payment of salaries of all workers in the private sector.

The announcement was made by the chairperson of the newly formed Financial Assistance Committee for Job Retention, Patrick Payet, following a first meeting of the committee at State House yesterday afternoon in the presence of President Danny Faure and the Minister for Finance, Trade, Investment and Economic Planning, Maurice Loustau-Lalanne.

The aim of the meeting was to discuss guidelines and procedures to be followed for the payment.

As announced by President Faure on Friday March 20, 2020, government has set up a special fund of R1.2 billion to pay for the salaries which will cater for three months basic pay and allowances. Periodic allowances like service charge will not be included in the payment.

Mr Payet, who is also the secretary of state for finance, said that as from Monday March 30, 2020, three offices – one at the ministry, one on Praslin and one on La Digue – will be operational to assist businesses with more information on the job retention salary scheme payment.

He said that among some of the terms and conditions, the employers have to submit a previous payroll for 2020 and subsequently their forecast payroll for the month of April 2020. They will also have to submit their cash flow forecast. He said that all terms and conditions for the salary payment schemes plus additional information which will have to be filled and submitted, will be made available through a form which will be finalised by Thursday March 26, 2020.

“The financial assistance will be there for all businesses to apply and then we as a committee, we will do our assessment so that at least we can call them if we need additional information so that we can have a clear picture of what assistance they have requested and maybe what assistance have been approved by the committee,” Mr Payet said, noting that the scheme will be for both Seychellois and expatriates.

Mr Payet said that there will be a cap in the salary payment though, similar to what exist in the thirteen month salary which is R45,550. He noted that anybody earning a salary above the R45,550 threshold, the employer will have to bear the difference either from their reserves or through a loan scheme to be implemented by the Central Bank of Seychelles (CBS).

He further noted that the employers will have to pay the salaries of their employees for March 2020 as the job retention scheme will start end of April 2020.

He stated that the employers will also have to continue to pay the income taxes and pension funds of their employees.

He said that salary payment scheme for the private sector will guarantee that no one will lose their job or will be made redundant.

He claimed that the scheme is also to help businesses to bounce back when the situation normalises.

As for un-licensed informal workers, Mr Payet said that they will have to go through the Agency for Social Protection for assistance. There are a total of 35,000 workers in the private sector with 17, 000 expatriates.

Other members on the committee include the principal secretary for finance, Damien Thésée; the economic advisor in the Office of the President, Bertrand Belle; the second secretary of CBS, Jennifer Sullivan; Fred Morel and Louisa Woodcock from the Seychelles Revenue Commission (SRC) and Oliver Bastienne, chairman of SCCI.