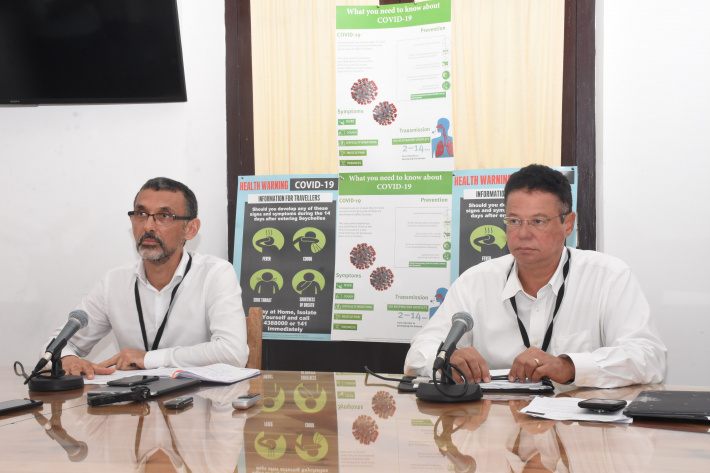 The count of positive cases remains at 7

Till now, the number of positive COVID-19 cases detected in the country is still seven, a figure which has been standing since Thursday last week.

The seven cases include three Seychellois and four expatriates, with one foreigner in critical condition, receiving treatment for lung problems.

They are receiving treatment at the Isolation Centre at the Family Hospital at Perseverance.

There are also 103 people in quarantine at the Berjaya Beau Vallon Bay Resort & Casino, while the quarantine facilities at the Seychelles Coast Guard base at Perseverance and at the Maison Football at Roche Caiman are accommodating 17 and 15 people respectively.

There are also 66 individuals in home quarantine, including 13 from Praslin (seven) and La Digue (six) as per public health guidelines, with appropriate follow up from surveillance team and the support of law enforcement.

The latest update was given yesterday by the chief executive of the Health Care Agency, Dr Danny Louange, during a press conference to keep the population informed of the latest development and information about the COVID-19 situation locally.

Dr Louange added that several health workers were under close monitoring, due to their working environment, but so far, most of them are back to their duties.

Also present at yesterday’s press conference was Public Health Commissioner Dr Jude Gedeon who emphasised on the measures that are being taken to contain the virus locally.

Dr Gedeon noted that there were two groups of people at the Four Seasons Resort Seychelles at Baie Lazare, precisely visitors and the local working staff.

He explained that in the case of the visitors, whenever there is an available flight, they leave the country by groups, while the local staff will remain at the hotel until the end of their observation, or isolation period.

Dr Gedeon further added that in case of any alert from the establishment, the rapid response unit will intervene and so far, there has not been any serious or suspicious case.

He also explained that at the end of their 14-day isolation period, a final test will be conducted to confirm that they are not infected.

Dr Gedeon also added that so far, they have conducted 124 tests, with only seven positive results, while after some more tests, out of the seven cases, some came out negative.

He however noted that, even if they are physical fit, they cannot yet be released since they may be carrying the virus.

He also explained that all Seychellois citizens returning from any country will be subjected to additional health screening and placed under obligatory quarantine for at least 14 days upon arrival.

All Seychelles citizens and residents are banned from travelling abroad, effective as of Monday March 23 for a period of 30 days, while those with dual nationality will not be allowed back after leaving the country.

As for the airline crew, Dr Gedeon said despite the aircraft being here to repatriate foreigners, the crew need to rest as per the International Air Transport Association (IATA) regulations, while entry screenings are carried out on them.

He once again urged members of the public to stay positive and continue to work together as the country does its utmost to contain the pandemic.

Dr Gedeon also asked all those who have been placed under home quarantine to take their responsibilities and respect the decision which falls under the Public Health (Infectious Disease) (Amendment)Regulations, 2020, a branch of the Public Health ACT, 2015.

Dr Gedeon noted that as a last resort, in case of non-cooperation, the intervention of the police or the armed forces will be inevitable in the process.

He also thanked the whole Seychellois nation for its support and words of encouragement which he said are a big boost to the moral of the medical team on the frontline, ensuring that the COVID-19 virus does not spread.